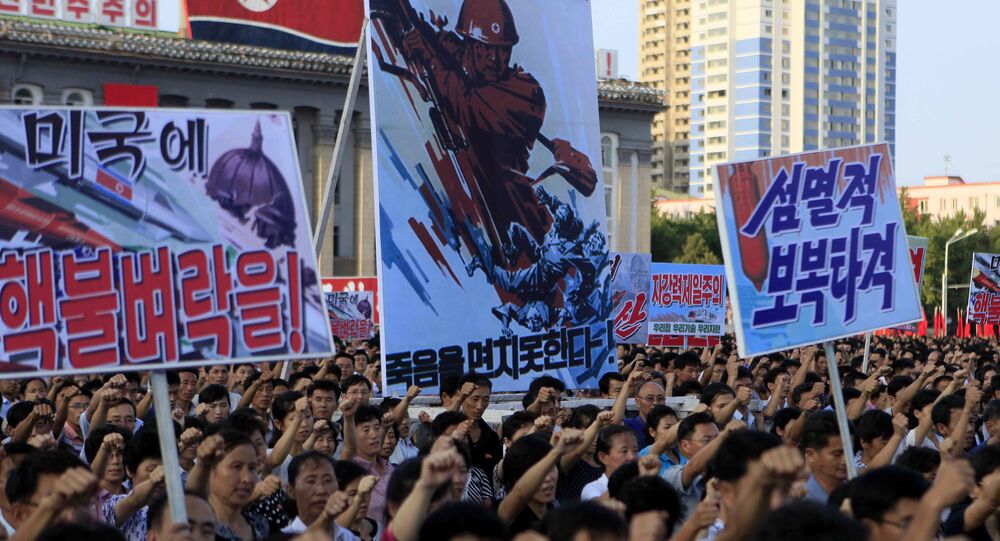 North Korea's possible retaliatory strike is the only thing that deters the United States from carrying out a preemptive strike on Pyongyang's missile sites, First Deputy Chairman of Russia's Federation Council Committee on Defense and Security Frants Klintsevich said on Thursday.

MOSCOW (Sputnik) – On Wednesday, the NBC broadcaster reported, citing senior military officials, that the Pentagon had prepared a specific plan for carrying out strikes on North Korea, should US President Donald Trump order such an attack.

"Pyongyang's response is the only thing which, in my opinion, stops the Americans. North Korean missiles are unlikely to reach the US mainland, but their allies will definitely have a rough time, and South Korea will take the brunt of the blow, bearing catastrophic consequences," Klintsevich said as quoted by his press service.

© Sputnik / Iliya Pitalev
US May Use Heavy Bombers in Guam for Preemptive Strike on North Korea
The deputy chairman said he believed that the possibility of a "hot war" in the region increased every day, since, apparently, Pyongyang was not going to stop its missile launches.

"The worst can happen if the next missile flies to the wrong place. North Korea's technical capabilities are not perfect enough to guarantee ruling out accidents. And then the Americans, ignoring the consequences, will not wait any longer," Klintsevich stressed.

On Wednesday, North Korea announced it was considering ballistic missile strikes near Guam, which hosts several US military bases. On Tuesday, US President Donald Trump said that if North Korea threatened the United States again Pyongyang would face an unprecedented level of "fire and fury."

Last month, Pyongyang conducted two tests of intercontinental ballistic missiles. According to the Korean Central News Agency, the latest launch on July 28 was successful, and the missile reached the altitude of 3,725 kilometers and traveled 998 kilometers, for about 47 minutes, before falling into the Sea of Japan.