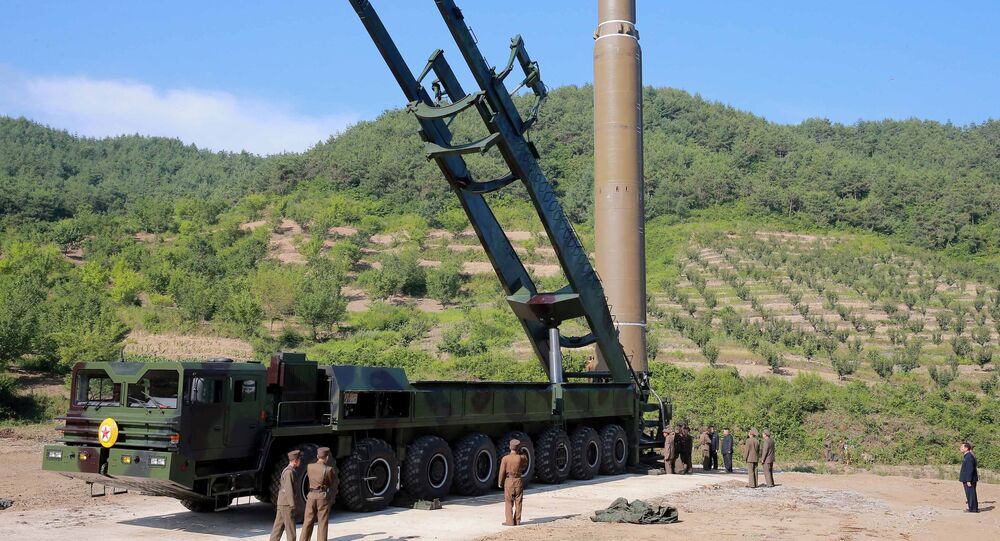 © Sputnik / Alexey Vitvitsky
Trump: If North Korea Escalates Threats, It 'Will Be Met With Fire & Fury'
TOKYO (Sputnik) – On Tuesday, the Washington Post newspaper reported, citing US intelligence officials’ confidential assessment, that Pyongyang had succeeded in developing a miniaturized nuclear warhead that could be placed inside its intercontinental ballistic missiles (ICBMs).

"[North Korea] either already has [miniaturized nuke warheads] or will wield them soon. We are at the [threat] level when it is necessary to show the precision of [our] surveillance and vigilance," Onodera told reporters.

Onodera stressed that the issue requires close cooperation with the United States.

"There is analytical data, [showing] that [North Korea's] intercontinental ballistic missile can reach US territory and that North Korea’s technologies for the miniaturization of nukes to equip ballistic missile warheads are developing. There is no doubt that this is a new type of threat [posed by Pyongyang]. By maintaining close contact with the United States, we will put in all efforts to ensure Japan’s security," Onodera  said, as quoted by the NHK broadcaster.

The so-called North Korean threat is becoming more pressing with each day as the country increases its number of missile tests. In July alone, North Korea conducted two ICBM tests. In addition, Pyongyang has already carried out five nuclear weapons tests, with the latest happening on September 9, 2016.

© REUTERS / KCNA
North Korea Threatens US Base in Guam with 'Enveloping Fire'
The looming threat has prompted the international community to enact punitive measures against Pyongyang. Most recently, on Saturday, the UN Security Council (UNSC) unanimously adopted a resolution tightening the sanctions on North Korea.

The sanctions target imports of coal, iron, iron ore, lead and seafood imports from the Asian nation to UN member states, and also prohibit UN members from setting up joint ventures with Pyongyang entities or individuals, or increasing the number of North Korean workers engaged in projects within any member state.