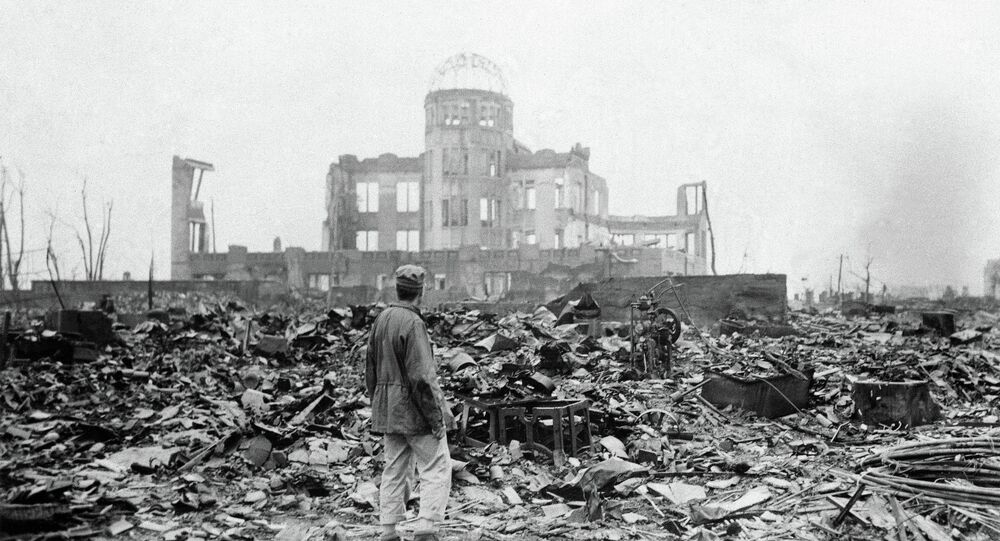 Today marks the 72nd anniversary of the first nuclear weapon ever used in warfare in human history, when an atomic bomb, codenamed "Little Boy", was dropped on the Japanese city of Hiroshima on August 6, 1945. Three days later, a second atomic bomb landed in Nagasaki, Japan. Sputnik spoke with some of the survivors of those terrible attacks.

© REUTERS / US Army
What US Taxpayers' Dollars Have to Do With Reason for Japan Atomic Bombing 72 Years Ago
In an effort to force the Japanese wartime government to accept an unconditional surrender, the US president at the time, Henry Truman, made a controversial decision to use the newly developed atomic bombs, from the Manhattan Project, against targets in Japan.

Official figures estimate that up to 140,000 civilians were killed in Hiroshima, with another 80,000 killed in Nagasaki. Many victims did not die on the first day of the attack, as a large number of them died from effects of burn and radiation sickness. Numerous survivors also suffered a wide range of sickness, as a result of exposure to radiation.

When the atomic bomb codenamed “Little Boy” was dropped on Hiroshima by the US aircraft, Yamamoto Sadao was just 14 years old.

© AP Photo / Stanley Troutman
New Photos From Hiroshima Atomic Bombing Discovered
He was weeding potatoes in the eastern part of the city, when suddenly his entire body seemed to burn with fire. The epicenter of the bomb explosion was 2.5 kilometers from where he was.

On that day, the boy had to go to the school, which was located in the western part of Hiroshima. If he had gone, he would have been in the very center of the city where the bomb fell and then nothing could have saved the boy from instant death.

© REUTERS / US Army
An atomic cloud billows above Hiroshima city following the explosion of the first atomic bomb to be used in warfare in Hiroshima, in this handout photo taken by the US Army on August 6, 1945, and distributed by the Hiroshima Peace Memorial Museum.

Today, Yamamoto Sadao is 85 years old and he has lived to tell the tale and warn humanity against nuclear weapons.

In an interview with Sputnik Japan he said, “My father was 680 meters from the epicenter of the atomic explosion. He was saved by the walls of the concrete house where he was at that moment but many people standing near the windows were killed by a shock wave.”

He recalled how one of his uncles survived the explosion but just after a few days after the explosions he started vomiting blood and died soon afterwards. It was due to the atomic radiation exposure.

“It is radiation that is the most terrible consequence of an atomic explosion. It kills a person not from the outside, but from within. It is very important to free the world of nuclear weapons,” Sadao said.

He further said that on July 7, the first multilateral treaty on the prohibition of nuclear weapons was approved at the UN, but such nuclear powers as the US and Russia, as well as Japan, which is under the nuclear umbrella of the United States, did not take part in the vote.

“We, who were victims of the atomic bombing, are very saddened by this and we want to urge the nuclear powers to liberate the world from nuclear weapons,” he said.

Yamado Reiko, 83 year-old survivor said that she was in school when the bomb blast occurred.

“When the atomic bomb exploded, I was in the school garden, 2.5 kilometers from the epicenter of the explosion. The area on the other side of the river was completely destroyed. From there, from the center of the city, people came running towards us, the whole road was crowded with people,” Reiko recalls.

© REUTERS / US Army
'Monstrous Crime': US Nuked Hiroshima, Nagasaki Knowing 'Tens of Thousands' Would Die
Due to the lack of medical help, hundreds of people died on the road. There were piles of dead bodies everywhere.

“They had to burn the corpses right in the courtyard of our school by digging trenches all over the ground. I remember the horrible smell of burning human flesh, which just stayed above the city,” Reiko said.

Prayer of the dead

Yoshiro Yamavaki who was the same age as Yamado Reiko, lived in Nagasaki at that time.

On August 9, Yamavaki was at home when two-kilometers away the atomic bomb named "Fat Man" was detonated by the United States.

Fortunately, his mother and two little sisters were in evacuation and therefore did not suffer, but he and his brother were just about to eat.

“My twin brother and I sat down at the table, preparing to dine, when suddenly a bright flashlight blinded us, then strong air wave swept through our house and literally smashed it. Just at that time our elder brother returned from factory and we all rushed to the bomb shelter, where we waited for my father, but he never came,” Yamavaki said.

Next day, when Yamavaki with his brothers went into town to look for their father they saw terrible things. Those images have stayed with him for all his life.

“On the bridge, we saw rows of dead men standing at the railing on both sides. They died standing up, and they stood with their heads bowed, as if in prayer,” the survivor recalled.

There were dead bodies floating along the river as well. People who had their insides come out were lying everywhere his eyes could see. “There was a young woman lying dead, her intestines were spread all over her body. It was horrifying,” he said.

© AP Photo / Stanley Troutman
US Won’t Apologize for 'Test Blasts' at Hiroshima, Nagasaki that Killed 226,000
When they finally reached the factory where their father worked, they managed to find his body and with the help of some other survivors, cremated him.

The atomic bombing of Hiroshima and Nagasaki is the only case in history when nuclear weapons were used for combat purposes. It left humanity shocked and horrified.

This tragedy is one of the most dreadful pages in the history of not only Japan, but of the whole of civilization. Almost half a million people were sacrificed for political purposes.

Former US president Barack Obama became the first sitting US leader to visit Hiroshima in May 2016. But he did not apologize for the decision to drop the atomic bomb.

“Why do we come to this place, to Hiroshima? We come to ponder a terrible force unleashed in a not-so-distant past. We come to mourn the dead," Obama said in a speech at Hiroshima’s Peace Memorial Park.