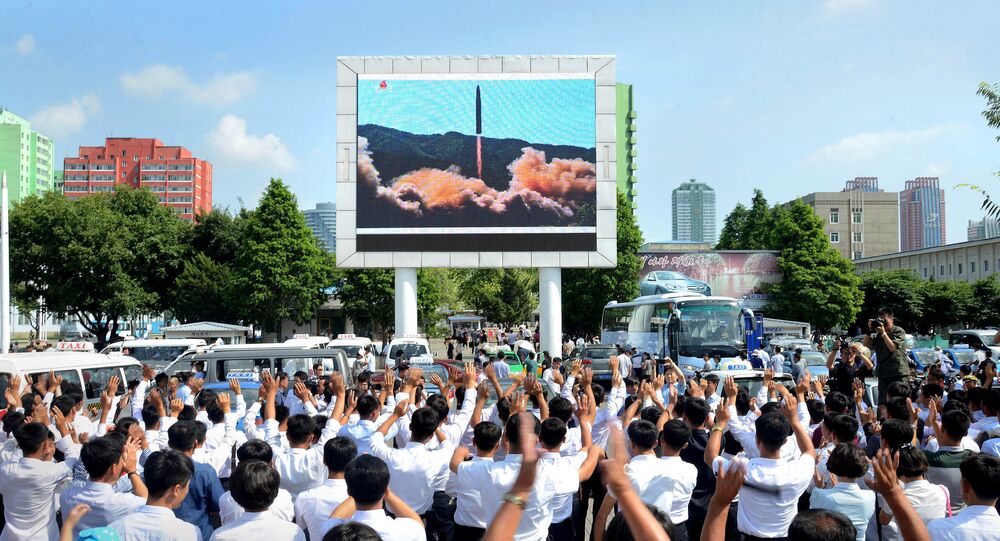 The US State Department has demanded that all US citizens located in North Korea must exit the country before September 1. In an interview with Radio Sputnik, political analyst Sergei Zhuravsky said that by doing so the US is trying to demonstrate its determination to act harshly.

© Sputnik / Iliya Pitalev
Anti-N Korea Sanctions Not in Line With Interests of US Allies, Rivals – DPRK
Earlier, Washington announced a ban on travel for the US citizens to the DPRK from early September due to “serious risk of arrest and prolonged detention.”

It was emphasized that US passports will no longer be valid for trips to North Korea or for transit via the country. The ban, which can be extended or, conversely, reduced, will be valid for one year.

An exception has been made only for the travel of journalists and humanitarian workers, as well as for travel “in the interests of the national security” of the United States.

Earlier, there were reports that the ban was imposed after the death of an American student, Otto Warmbier, who served a 17-month detention in a North Korean prison.

He was a student from the University of Virginia, who was returned to the US in a coma. He was convicted in North Korea to 15 years in prison for attempting to steal and take out a political poster from Pyongyang.

He died a few days after his return to the United States.

Political analyst and the chairman of the All-Russian public movement “Reforms-New Deal” Sergey Zhuravsky believes that all this is an act through which the US wants to demonstrate to the DPRK authorities its determination to act tough.

“I believe that these US actions are aimed primarily at establishing demonstratively tough actions against the DPRK. In my opinion, there is no ongoing talk about any military preparations, it is just another warning from the US to the DPRK authorities,” Zhuravsky said.

© AP Photo / Wong Maye-E
Winds of War: Why is US Ordering Its Citizens Out of North Korea?
He further said that previously the United States had similarly recommended that its citizens refrain from traveling to Russia and to the territories of Russia’s neighbors.

“So I think this is purely a diplomatic game in order to show their seriousness,” the analyst stressed.

According to Zhuravsky, North Korea is likely to reciprocate the actions taken by the US, and its response will be no less harsh.

“North Korea can totally prohibit US citizens entering into its territory. It can also demonstratively announce another missile launch because it [the DPRK] is not afraid and does not hesitate to express its feelings,” the analyst said.

He further said that there are speculations that the latest missile designed by the DPRK can allegedly reach California. This is still just talk because technically nothing has been confirmed, but people are talking about it and it scares them, hence it works, the analyst noted.

As for the US itself, the analyst expressed some doubts regarding the manageability of both the domestic processes and actions directed at other states.

“The US has a very incomprehensible internal political situation at the moment with the latest decisions of Congress restricting the president's opportunities, and therefore there are certain doubts about the US's controllability – both diplomatic and military,” Zhuravsky said.

He further said that the US seems to be fighting all over the place: it is threatening China and is actively interfering in the Middle East “but it seems like something is seriously wrong with the political and military departments within the United States,” the analyst concluded.

'How Many Spies Did We Catch?': How Kids Are Educated in North Korea (PHOTOS)