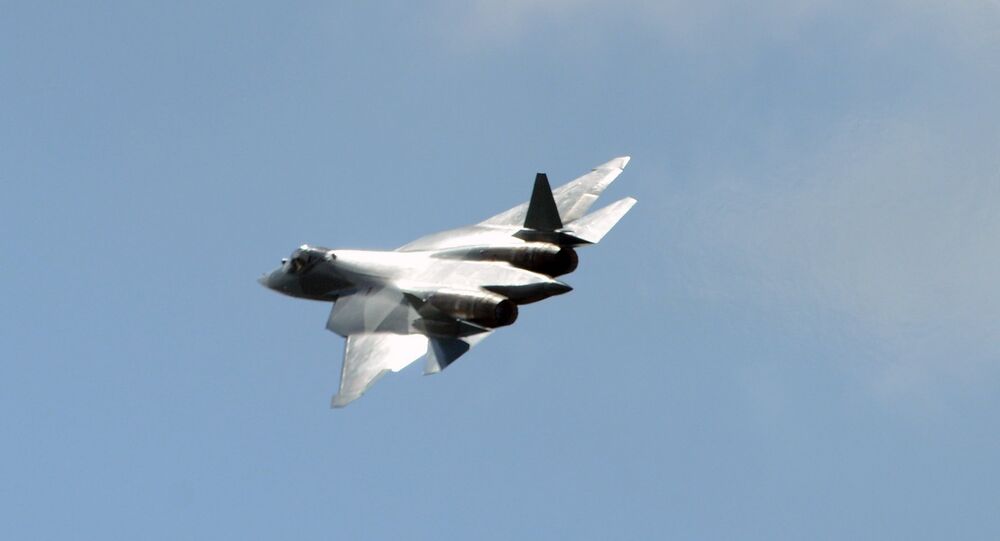 © Sputnik / Maksim Blinov
Russia's Sukhoi Company Refutes Reports of Deal on Superjet 100 Deliveries to Iran
New Delhi (Sputnik) — Industry people involved with the decade-long project expect the deal to be signed in the coming months as most contentious issues have been resolved including costs. Early conclusion of the R&D contract will pave way for testing Indo-Russia FGFA fighter to the IAF in the next three years with the flying platform made by the Hindustan Aeronautics Limited (HAL). The FGFA will be based on the Sukhoi-designed PAK-FA.

"The IAF FGFA would be powered by the second stage engine of the PAK-FA which is still under development. PAK-FA is being developed using NPO Saturn AL-41F1 engine, which will also power the initial production lot. The second stage engine, unofficially referred to as Product 30, is expected to start flight trials in end-2017," Vijainder K. Thakur, senior editor of Geopolitics and former IAF squadron leader, said.

It is considered that compared to the AL-41F1, the new engine is 30% lighter, features improved thrust (19,000 kgf vs 15,000 kgf), better fuel efficiency and fewer moving parts resulting in improved reliability and 30% lower life-cycle cost. Highly efficient supercruise engine puts an end to the concern earlier raised by the IAF about the engine power of the T-50.

© Wikipedia / Alexey Demin
Russia to Deliver Five Sukhoi Superjet Passenger Planes to Zambia in 2018 - UAC
Integration of the Product 30 engine and flight testing on the PAK-FA could take 2-3 years, which would give time to redesign the airframe for a second cockpit and integrate India-specific electronics and flight computers.

"If we join now, we will still get a significant part of the work share, thanks to delays in the PAK-FA project. HAL would co-design the avionics, including navigation systems, radars and weapon aiming devices. This is the heart of the fighter's combat ability," T Suvarna Raju, chief of HAL, the Indian partner of the project, told Business Standard.

Another concern, reported in Indian and Western media, was the exorbitant price demanded by Russia, which was actually not the case. Defensenews had reported in May this year that, ‘Russians are demanding more than $7 billion as part of India's share in the development of the FGFA.' Another Indian media outlet said IAF will run out of cash as Russia has asked it to purchase 127 such aircraft at a cost of $135 million each.

"Russia has been very positive. My understanding is that Russia and India would jointly share development cost of the FGFA from the PAK-FA, which appears very generous on the part of the Russians as they are not asking India to pay for the development of the PAK-FA per se," Vijainder K. Thakur added.

India has spent $240 million for primary design phase as of March 31, 2017. Now, for the R&D phase, an expenditure of approximately $3.05 billion will be required. Earlier this month, Sergey Chemezov, CEO of Rostec Corporation, had said the second stage of the project is being discussed and will be completed in the near future as documents have been signed.