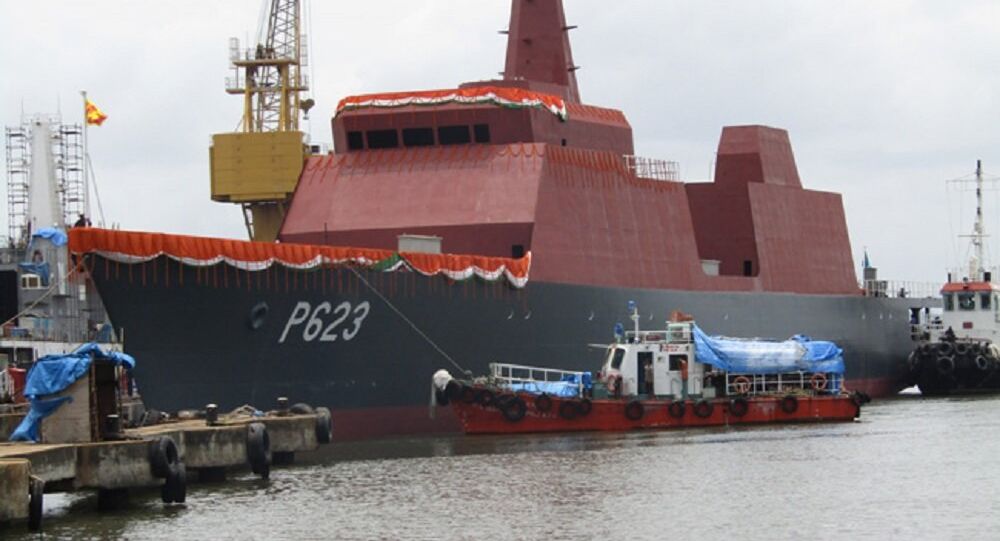 To compete and counter China’s maritime influence in its backyard, India’s Goa Shipyard has delivered an advanced offshore patrol vessel (AOPV) to Sri Lanka, which is considered to be the biggest warship of the small island nation, a critical partner of India in the Indian Ocean.

© AP Photo / Aijaz Rahi
Indian Defense Minister to Become Next Chief Minister of Goa - Source
New Delhi (Sputnik) — Designed in-house and built by Goa Shipyard Limited (GSL), the ship is to be commissioned into the Sri Lanka Navy as SLNS Sayurala on August 2 in Colombo. The Indian Navy said, "Ship delivered ahead of schedule and showcases close interaction between Sri Lanka Navy, Indian Navy and manufacturer GSL in the execution of the project."

"First time in the history of GSL, we are handing over two OPVs within a gap of one month, against earlier minimum interval of 5-6 months. In last 20 months, we have delivered 5 OPVs for Coast Guard, 2 FPVs & 11 FICs for Mauritius and this AOPV for Sri Lanka, besides other smaller projects, all ahead of schedule," Rear Admiral Shekhar Mital, Chairman and Managing Director of GSL, said.

The Indian government had sanctioned two OPVs for Sri Lanka in 2010 and the contract for the same was signed in April 2013. The 105.7-meter-long and 13.6-meter-wide vessels have a full-load displacement capacity of 2350 ton, with an overall beam of 13.6 meters, and a hull draught of 3.6 meters. The OPV can reach a top speed of 24 knots and accommodate a crew of 118, including 18 officers, and a helicopter on its flight deck.

"SLOPV contract is one of the major export contracts, being executed by GSL currently for friendly countries. With this, the shipyard has succeeded in reducing build period of 2500 ton OPV to nearly 3 years from 5 years taken till about 3 years back," Mittal added.

© Flickr / Ian D. Keating
Russia, India to Hold Military, Technical Conference in Goa at End of Year
The state-of-the-art vessel is equipped with a landing and hangar facility for Advanced Light Helicopter (ALH) and costs an estimated $66.55 million when it reached the completion stage of its construction.

The ship is intended to patrol, police, reconnoiter, help in surveillance, search and rescue, humanitarian assistance and disaster relief (HADR) and pollution control missions in the country's maritime zone. It can also be used for external fire-fighting missions as well.