Amid speculations that Japan could jump on China’s "One Belt, One Road" (OBOR) bandwagon, Indian experts project a grim possibility of such venture.

The Japan News quoted Prime Minister Abe as saying “It (OBOR) has potential. We hope the initiative will contribute to regional and global peace and prosperity by adopting ideas held by all in the international community. We want to cooperate in that respect.”

This statement was widely construed as an affirmation of Japan’s desire to participate in the Chinese with the intent of reaping dividends for its domestic companies as well as to gain a voice within a big-ticket project. It was also seen as Japan’s tactical pressure on the US as a key ally joining a Chinese-led initiative could force President Donald Trump to reconsider his stance on withdrawing from the Asia-Pacific region.

Earlier in March this year, China had organized a grand summit in Beijing to showcase its plans to build OBOR – a network of trade routes that will connect Asia, Africa, the Middle East and Europe. India and Japan were also invited along with 65 other countries. While India flatly refused to participate, Japan, after initial reluctance, had agreed to send a low-key delegation to the summit. Around 60 countries have so far agreed to be part of the project, with a cumulative estimated investment of as much as $8 trillion. 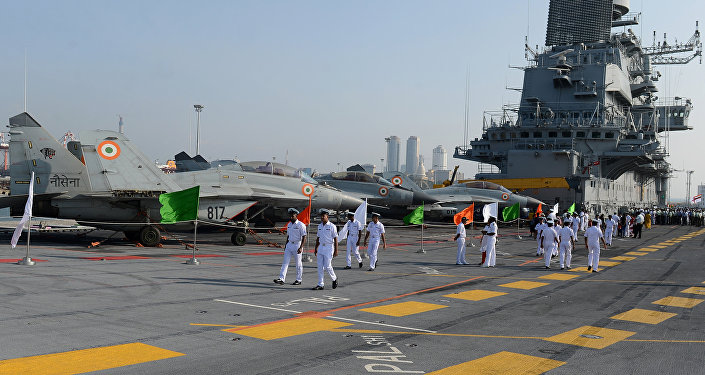 © AFP 2019 / LAKRUWAN WANNIARACHCHI
Three Against One: Japan, US, India Flexing Muscles Before China
Indian experts say while Japan did attend the OBOR Summit in Beijing, there still remains an open-ended debate within Japan over their level of engagement. “There is no concern for India as we still don’t know what level of engagement Japan is eyeing in the project. There is a significant domestic lobby within Japan, particularly industry people, who want to take part in the project as it makes business sense for them. But, Prime Minister Abe hasn’t committed anything so far and he is coming to India later this year where we will get a very clear idea of what’s going on. Also, even if Japan wants to get involved in the OBOR, we can’t prevent or object to it. What matters is that Japan is also involved in the Trans-Pacific Partnership as well as the Asia-Africa Growth Corridor. We have a strategic partnership with them,” K.V. Kesavan, Distinguished Fellow at the New Delhi-based Observer Research Foundation told Sputnik.

India’s key concerns stems from the fact that a 3,000 km stretch of the project passes through the Gilgit-Baltistan region which lies in the Kashmir region over which both India and Pakistan has territorial claims. India is also threatened as it feels that China is encircling it through a web of sea and land route under the garb of commercial projects, which could be used as military facilities as well.

Nevertheless, experts say it would be premature to speculate any impact of Japan’s seemingly changed stance on OBOR on India-Japan strategic partnership which is mainly aimed at containing the military rise of China. The two countries along with the US are currently part of the ongoing annual Malabar naval exercise in the Indian Ocean.