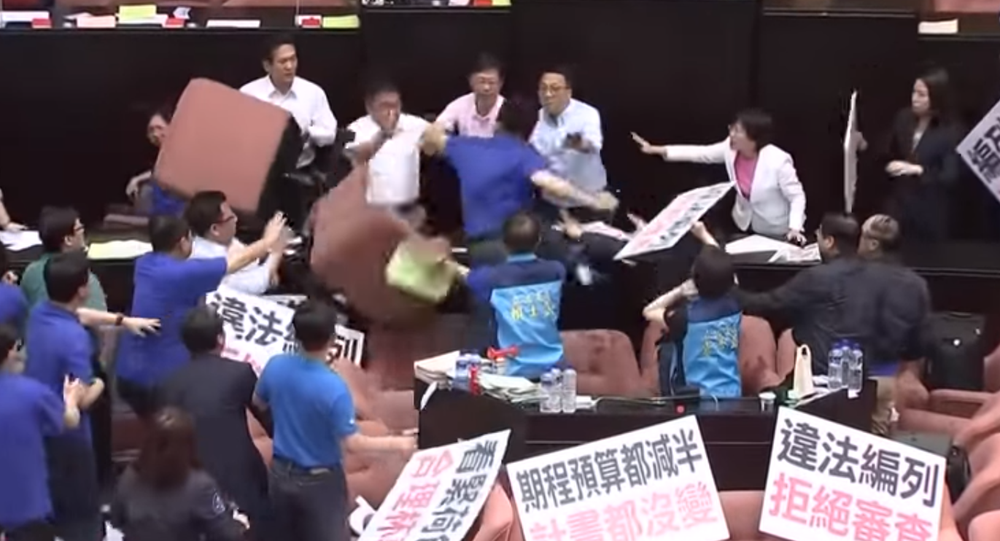 For the second time in as many days, a meeting of the Taiwanese Parliament turned into a battle royale as lawmakers swung chairs and threw water balloons at one another. The brawls have been fought over a controversial infrastructure project that is one of the signature proposals of President Tsai Ing-Wen.

The infrastructure project is meant to build new light rail lines and green energy production facilities, and bring general urban and rural development. However, Tsai's political opponents in the right-wing Kuomintang Party have accused the bill of favoring counties and cities that voted for her Democratic Progressive Party (DPP) in the previous election. This would secure their support for her party in next year's regional elections.

On Thursday, Premier Lin Chuan (the head of Taiwan's government and one of Tsai's most significant subordinates) was presenting his report on the project budget when a water balloon sailed through the air and hit him in the head. Lin retreated from the chamber as the session ground to a halt, with lawmakers attacking one another.

He tried to present the budget again on Friday, but once more DPP lawmakers ended up in a kerfuffle with their Kuomintang counterparts as they hit one another with office chairs and continued to exchange water balloons. Two female MPs from opposing parties were seen with their hands locked around one another's throats. Once more, the session was suspended while Lin looked on helplessly.

No injuries were reported, although one MP said that he wasn't feeling well and was examined by the Parliament's infirmary.

Meanwhile, outside the building, Acting Kuomintang Chairman Lin Jung-tzer led a group of parliamentarians and protesters in a chant of "Send back the budget, defend Taiwan!"

It has been a raucous few months in Taipei as many elements of Taiwanese society protest the initiatives of their controversial and reform-focused president. A DPP attempt to expand social welfare in April led to violent protests as demonstrators fought with politicians and police.

Parliamentarians also got their licks in against one another in late 2016 when a smoke bomb was let off in Parliament by labor activists in opposition to proposed cuts to vacation time. Several MPs took the chaos as an opportunity to throw hands against opposing lawmakers.

'Signal to Beijing': Why is Washington Selling New Weapons to Taiwan?