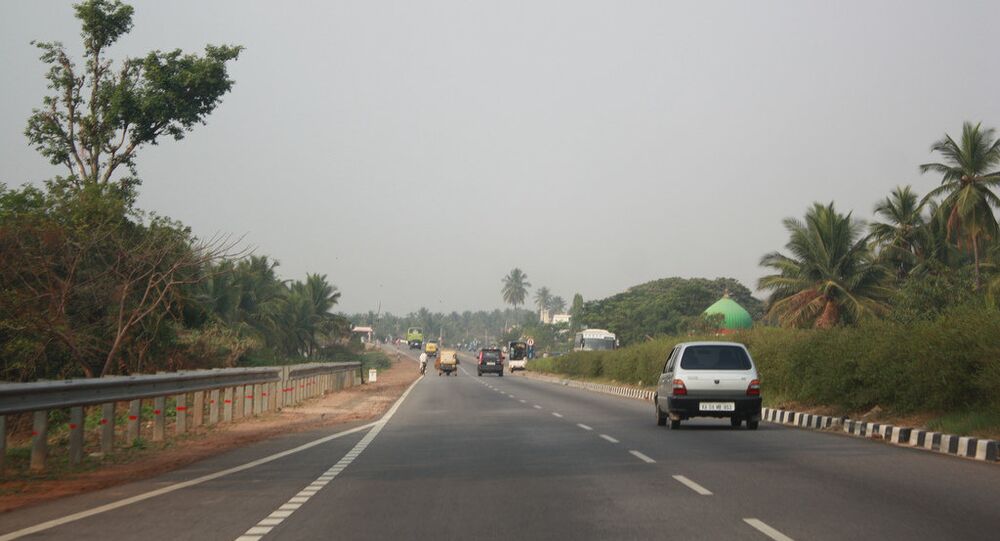 Aiming to build Asian No.1 Highway to open a gateway to East Asia, the Indian government has once again failed to allocate sufficient money to build roads in the north-eastern part of the country to connect to the grand plan.

New Delhi (Sputnik) — The Narendra Modi government has approved spending of $241 million for upgrading and widening 65 kilometers of Imphal-Moreh Section of NH-39 in the northeastern state of Manipur.

© AFP 2021 / STRINGER
India Revives Intel Wing to Keep Tabs on Chinese Activity in Nepal, Bhutan
In May this year, Indian Road and Transport Minister Nitin Gadkari had claimed construction work to connect Moreh in India to Mae Sot in Thailand would begin from June and the government will spend more than $750 million. This is three times more than what was announced by Gadkari on Wednesday. The length of the road has been shortened in this phase.

"North East has always been a focus of government especially from an infrastructure point of view. We have approved project worth $241 million for north-east, Manipur to Myanmar road connectivity. This will further provide connectivity to Malaysia, Singapore…," Nitin Gadkari told reporters in New Delhi after the Cabinet meeting.

​The Asian Development Bank (ADB) will provide 50% of the funds required for the project as loan assistance under the South Asian Sub-Regional Economic Cooperation (SASEC) Road Connectivity Investment Program. The program aims at upgradation of road infrastructure in Bangladesh, Bhutan, Nepal and India. The project corridor is also a part of the Asian Highway No. 01 (AH01) and acts as India's Gateway to the East.

The India-Myanmar-Thailand project is also claimed as the rival to China's One Belt, One Road project. The 1360-kilometer-long project was kicked off in 2005 with an ambition of boosting trade, business, health & tourism among them. Last year, the government had made a claim that project would be completed by 2020 but at the current speed and lack of clarity over funding, it is hard to believe that once again completion schedule will not be extended.