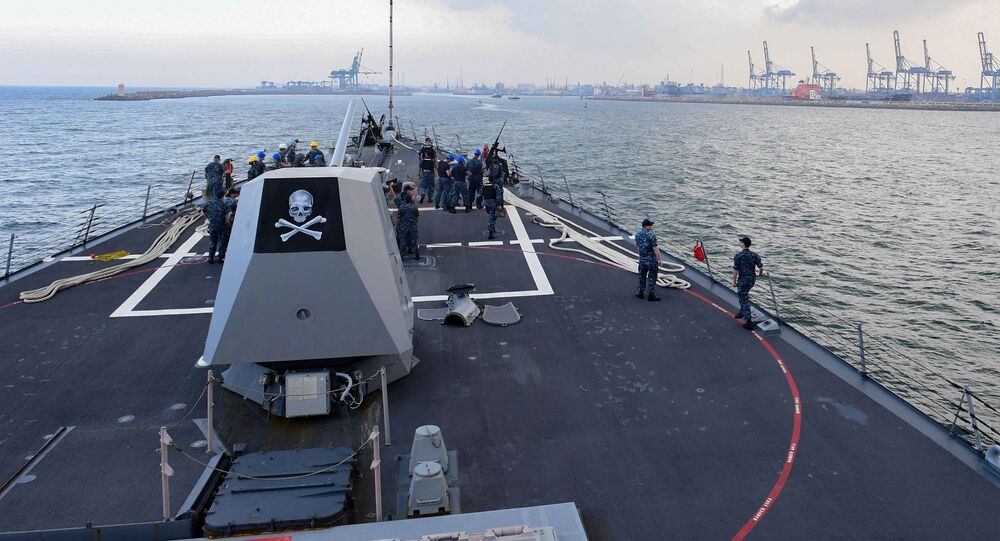 Malabar Drills: Who's Trying to Pit India Against China, 'Add Fuel to the Fire'?

US Navy Cmdr. Rear Adm. William Byrne has said that the ongoing war games between the navies of the US, Japan and India, known as Malabar 2017, are intended as a "strategic message to China." Commenting on the announcement, Russian military analyst Alexei Leonkov told Sputnik Radio that this interpretation is an attempt to pit India against China.

The exercises are being held in Chennai and the waters of the Bay of Bengal.

According to the Indian media, the US Navy is fielding USS Nimitz, the world’s largest aircraft carrier. The Indian Navy’s solitary aircraft carrier, the INS Vikramaditya, and Japan’s Izumo-class helicopter carrier are also among the 20-odd warships taking part in the exercise.

A US guided-missile cruiser, the USS Princeton, is also participating, as well as the guided-missile destroyers USS Howard, USS Shoup, and USS Kidd. The US arsenal includes a P-8A Poseidon submarine hunter plane and a Los Angeles-class fast-attack submarine; and the Japanese destroyer JS Sazanami will take part.

Sources indicated that the Indian warships at the exercise also include two Shivalik-class stealth frigates, two Ranvir-class destroyers, a Kamorta-class anti-submarine warfare corvette, a tanker and a submarine.

Right after the kickoff of the drills, US Navy Cmdr. Rear Adm. William Byrne told reporters that this is "a strategic message to China."

"By voicing such an interpretation of the message of the drills, the US wants to fuel the flame which was previously burning between India and China over [China's] presence in the South-China Sea. However during the recent meeting between President Trump and Indian Prime Minister Narendra Modi it was announced that the main message of the exercise is the fight against terrorism," Leonkov told Sputnik.

Besides, he explained, the drills are being held in the north Indian Ocean and in the Bay of Bengal, which is relatively far from China.

"It simply might be beneficial to someone to pit India against China as it might breed certain friction in such an organization as BRICS. However I doubt that they will be able to do it," the military analyst said.

He also pointed out at certain peculiarities of the ongoing drills.

© AP Photo / Arun Sankar K.
War Games: China Fumes at US, India, Japan Joint Naval Exercises
"Regarding the usual participants of these military drills, Australia and Singapore have been non-permanent participants of these military series. However, this year India has declined Australia's request to participate. Not the US, but India. Additionally, Indian mariners and servicemen are gaining pace and the quality of their training is improving; at times they demonstrate a certain superiority over the "invincible" US armed forces. However, only conventionally," he noted to Sputnik.

Nevertheless, the military analyst said, the level of training of the Indian armed forces is steadily increasing. This year, two aircraft carriers are taking part in the drills, as well as a Japanese Izumo-class helicopter carrier. One of the two aircraft carriers, he pointed out, is the Indian Navy’s solitary aircraft carrier, the INS Vikramaditya, which is being used with Russian-made MiG-29 jet fighters.

Malabar 2017 is part of ongoing joint exercises involving the US that started in 1992 to address shared threats to maritime security in the Indo-Asia Pacific.

The three navies perform maritime patrol and reconnaissance operations, surface and antisubmarine warfare, medical operations, damage control, helicopter operations, and visit, board, search and seizure operations, according to the release.