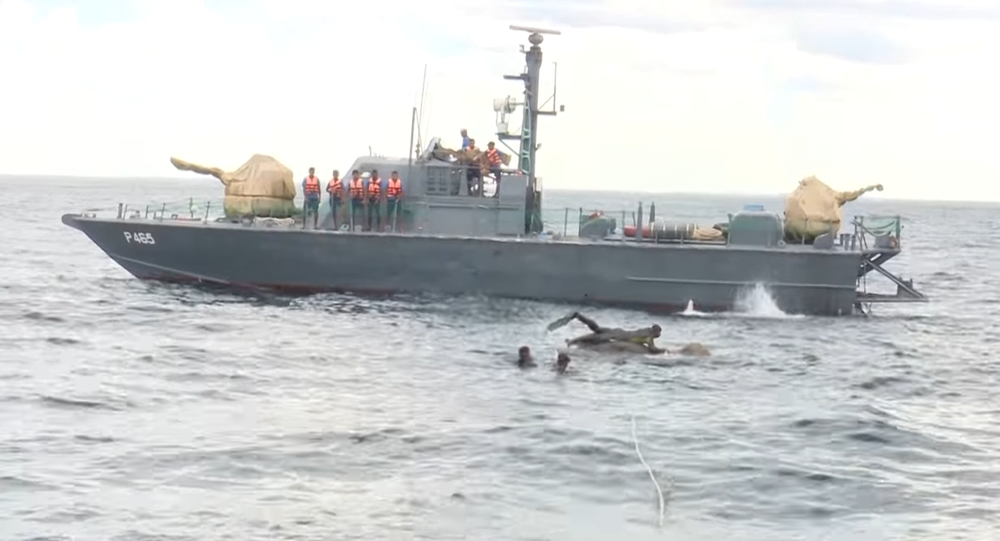 An incredible video has emerged online of a drowning elephant lost at sea 10 miles from the shore being rescued by a Sri Lankan navy vessel.

The navy vessel was on patrol along the northeast coast of the island, near the town of Kokkilai, when they saw an elephant dragged five miles out to sea. Quickly, the elephant was submerged and it stuck its trunk above the water like a snorkel to keep itself from drowning.

The navy deployed a fast naval patrol craft to follow the elephant as it was dragged farther and farther from the shoreline by currents. They consulted Wildlife Department officials and plotted a rescue.

Navy divers leaped from their ship and tied a rope around the elephant's neck, guiding it back to shore. It took more than 12 hours for navy and Wildlife Department officials to successfully bring the elephant to safety.

"They usually wade through shallow waters or even swim across to take a shortcut, "Lieutenant Commander Chaminda Walakuluge, who participated in the rescue, told AFP. "It is a miraculous escape for the elephant."

Walakuluge added that it was likely that the elephant was pulled out to sea while it was trying to ford the Pulmoddai lagoon in Kokkilai. The divers named the elephant Alliya Pulmoddai (Alliya being a popular girls' name in Sri Lanka) and left her in the care of the Department of Wildlife.

Asian elephants are known for their habit of swimming short distances to cross rivers and lagoons. "They're very good swimmers," Avinash Krishnan of the conservation group A Rocha told the Guardian. "Swimming about 15km from the shore is not unusual for an elephant. [But] they can't keep swimming for long because they burn a lot of energy."

The Sri Lankan elephant is an endangered subspecies of the Asian elephant, with the population having shrunk from 10,000 in the early 20th century to less than 2,000 by 1993. Conservation efforts have restored the population to about 6,000 today, but the elephants are still threatened by human activity disrupting their habitats.

But at least this particular elephant's story has a happy ending.