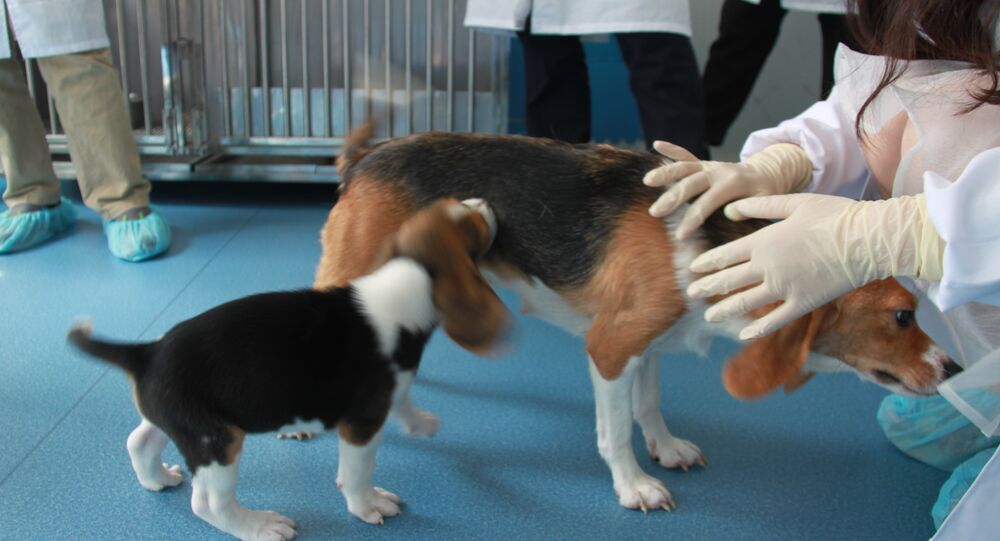 Over the past 20 years, global scientists have achieved a significant breakthrough in the area of animal cloning, with China announcing last week that it had become the first country in the world to clone a genetically engineered dog.

BEIJING (Sputnik) — Beijing-based SinoGene biotechnology company said that it had successfully created a cloned beagle puppy named Long Long. The puppy is not only the first clone to be made from a genetically modified dog, but also the first cloned canine.

Sputnik correspondents visited the company's laboratory in order to find out why scientists chose a dog for cloning and spoke with SinoGene Director General Mi Tzidun and his deputy Zhao Jianping.

The cloning process of a genetically engineered dog takes anywhere from two to several months. According to Mi, within one experiment, scientist try to clone 10 dogs, but modification in the genome can occur only in two individuals. At the same time, he stressed that it is not possible to predict the success rate, since there is always a factor of uncertainty. In some cases, the experiment may be completely unsuccessful.

According to Zhao, gene modified dogs retain their reproductive capacity and are able to reproduce from the age of 10 months. Gene modifications are transmitted to next generations.

The life expectancy of such dogs does not differ from those of ordinary ones, Mi added.

Some media outlets have called Long Long a "super dog," however SinoGene scientists do not agree with this characterization.

"An animal with the quite well-developed motor and olfactory functions, performing special work, can be called a super dog. A guide dog, for example, or hunting dog or a dog performing search and rescue work. But we create dogs using a method of genetic editing, which causes disease. In simple terms, in future the dog acquires the ability to suffer from human diseases, so it can not be called a 'super dog,'" a SinoGene researcher said.

The Goal Justifies the Means

Genetic engineering technologies have significant importance for the development of medicine, as they help to treat tumors and genetic disease, the SinoGene researcher added.

"It is possible to test the drugs safety and check their effectiveness using cloned dogs. Previously, dogs were used relatively rarely in such experiments, because the process of editing a dog's genes is rather complicated. We conduct these studies, because the course of the disease in dogs and humans is relatively the same. Dogs and humans also have a high degree of genetic similarity," the researcher added.

Speaking about the morality of this practice, Chinese scientists say that unfortunately the development of science and medicine requires such victims.

SinoGene experts said that the next step in their research could be the cloning of a genetically modified cat.

"However, at the moment we do not yet have the necessary technologies, we need to accumulate experience and knowledge, then we can make further plans. Using this knowledge, it will be possible to conduct appropriate studies of the entire feline family, especially with regard to endangered animal species, for example, the Amur tiger and some species of leopard," Mi said.

The director general added that the company maintains transparency in its research and is ready to share its discoveries with the world community for the development of science.