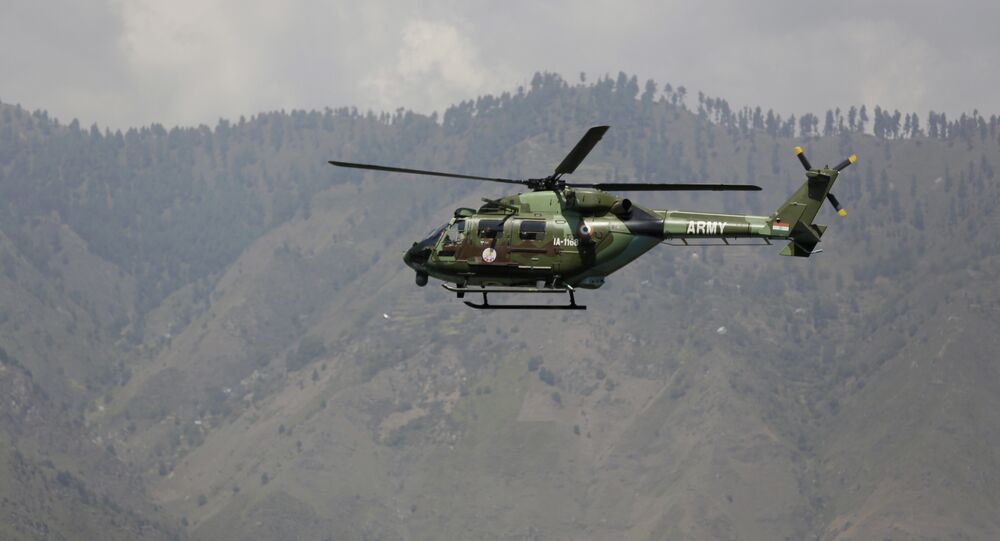 The wreckage of a missing advanced light helicopter of the Indian Air Force (IAF) has been found in the Pampunpare district of Arunachal Pradesh following a 24-hour joint search operation conducted by the Army, the Indo-Tibetan Border Police and Arunachal Pradesh police on Wednesday.

New Delhi July 6 (Sputnik) — The helicopter had gone missing Tuesday while carrying out a flood relief mission near Itanagar in the northeastern state. It had carried out five sorties evacuating people stranded after landslides between Naharlagun and Sagalee. There were three crew members and a member of the Arunachal Pradesh police on board when the aircraft was reported missing. Though search and rescue operations were initiated, they were hampered by bad weather.

“The Arunachal Pradesh Police team spotted the wreckage of the helicopter on the evening of July 5. On the morning of July 6, rescue parties comprising IAF Guards and a medical team, the Army and the [National Disaster Response Force] NDRF were able to reach the crash site along with the Arunachal Pradesh Police team, who had sighted the wreckage. The bodies of three personnel have been recovered so far. A Court of Inquiry has been ordered to investigate the cause of the accident,” the Indian Air Force said in a statement.

The helicopter was on a flood relief mission in the states of Manipur, Assam and Arunachal Pradesh, where more than 100,000 people have been displaced due to heavy floods.

​More than 20 people have been killed and over 600,000 people affected by the heavy rains and subsequent flooding, which have not let up since the start of India’s monsoon season in northeastern states of Assam and Arunachal Pradesh.

​The Indian Air Force lost two of its pilots in a crash of its frontline aircraft Sukhoi-30MKI in May this year. The jet crashed near the China border. The reason for the accident is yet to be disclosed.