China has accused India of misleading people by saying Chinese troops are building a road close to the strategically important area known as 'Chicken’s Neck' in Sikkim sector. 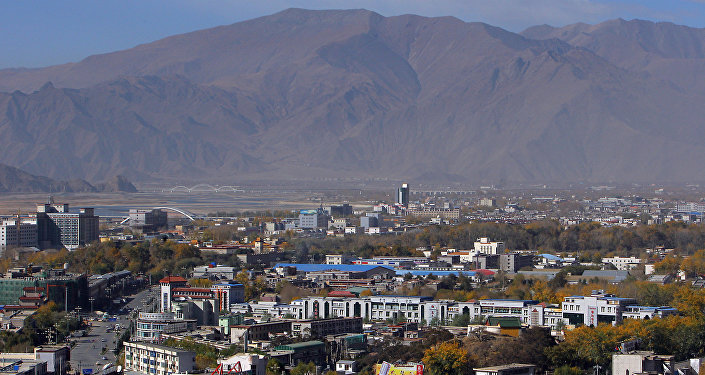 © Sputnik / Iliya Pitalev
China Cancels Indian Journalists’ Tibet Trip Amidst Sikkim Stand-Off
New Delhi (Sputnik) — The India-China stand-off is taking an ugly turn as both the countries are accusing each other of misleading the public.

In reply to India's allegations that China is illegally constructing a road in Doklam Plateau, China accused India of misleading the world by giving incorrect facts.

"In disregard of the 1890 Sino-Britain convention, the Indian side said that Doklam is located within the tri-junction of the three countries, that is misleading the public," Chinese foreign ministry spokesperson Geng Shuang told media.

"The 1890 convention said the Sikkim section of the boundary commences from East Mountain and the incident took place about 2000 meters away from Mount Gipmochi," Shuang said.

"The Indian side is actually misleading the public by saying the incident took place at the tri-junction point," the spokesperson said, defending the Chinese construction activity in the Doklam area.

Earlier, China's ambassador to India Luo Zhaohui told an Indian new agency that there was no scope for a compromise in the military stand-off with India in the Sikkim sector.

"The ball is in India's court and it was for the Indian government to decide what options could be on the table to resolve the stand-off," the Chinese envoy said.

Luo Zhaohui also stressed Indian troops should unconditionally pull back to the Indian side.

Earlier, Indian Defense Minister Arun Jaitley warned China that India of today is different than that of 1962. The Indian external affairs ministry had alleged that Chinese forces entered Indian territory and destroyed two bunkers and asked China to withdraw its troops.

© AFP 2019 / Agnes BUN
India Concerned Over Chinese Construction In Sikkim Sector
India and China have been engaged in a stand-off for the last few weeks over the construction of a road in the Doklam area which basically belongs to Bhutan but China claims it as part of its Donglang region.

The Doklam area, which is called ‘Chicken's Neck' is a tri-junction of India, China and Bhutan, and, is of strategic significance for both India and China. It connects India's Siliguri corridor which connects the north-east with the rest of India.

China claims the Doklam area citing 1890 treaty between China and Britain while Bhutan claims the area as its own territory and India is supporting Bhutan's claim as per the agreement between India and Bhutan.

Prime Minister Narendra Modi and Chinese President Xi Jinping are expected to meet this week in Germany at the G 20 summit and all eyes on this meeting, whether it will break the stand-off between the two countries