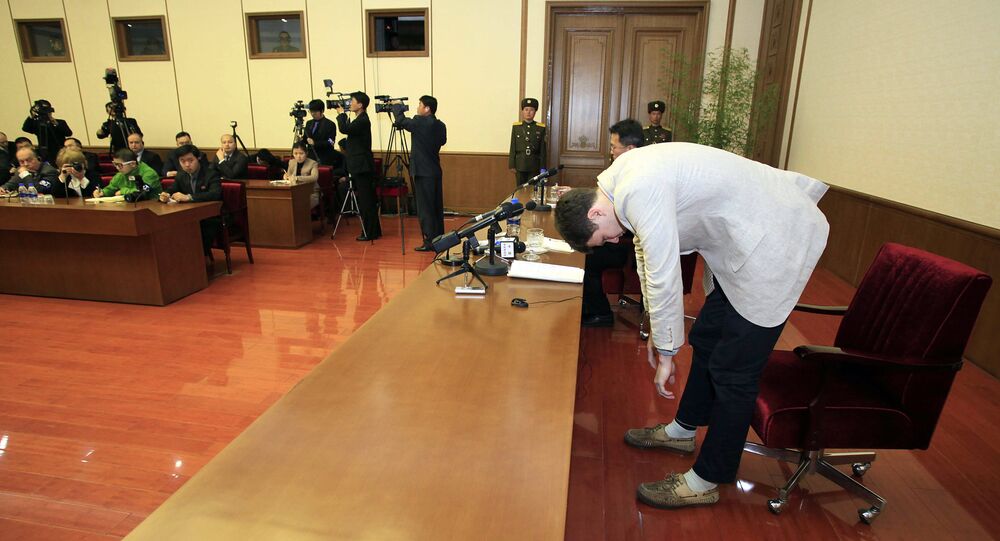 North Korea has denied that it put deceased American student Otto Warmbier through cruel or torturous treatment during his 17-month detention in the country. Instead, the Hermit Kingdom is arguing that the US has orchestrated a “smear campaign” against them.

"The smear campaign against [North Korea] staged in the US compels us to make firm determination that … we should further sharpen the blade of law," said a spokesman for the North Korean Foreign Ministry in a statement.

"Although we had no reason at all to show mercy to such a criminal of the enemy state, we provided him with medical treatment and care with all sincerity on a humanitarian basis until his return to the US, considering that his health got worse."

The spokesman said Warmbier was provided proper medical treatment during his stay. "The fact that Warmbier died suddenly in less than a week just after his return to the US in his normal state of health indicators is a mystery to us as well," he said.

Previously, the DPRK said that Warmbier contracted botulism during his stay. Botulism is an infectious disease that is usually caused by the consumption of tainted food or getting dirt and filth into open wounds.

American doctors who treated Warmbier claimed to find no evidence of botulism. Instead, they believed his condition was caused by a severe neurological injury brought on by oxygen deprivation. The family has requested that no autopsy be performed.

Otto's relatives claimed that he had been in a coma since shortly after March 2016, when he was sentenced to 15 years hard labor after being accused of trying to steal a propaganda banner.

The Foreign Ministry statement also criticized South Korea, which had called on the North to release its other detainees including six South Koreans. "Our related institutions are treating criminals who committed crimes against [our] republic strictly based on domestic law and international standards, and Warmbier was no different."

Seoul's demands were "slanderous talk about cruel treatment and torture" with no basis in reality, according to the DPRK.

"The US should ponder over the consequences to be entailed from its reckless and rash act," he added, possibly an allusion to the three Korean-Americans currently imprisoned by North Korean authorities.

Warmbier's death has caused furor among the American political establishment, including with US President Donald Trump. "It's a total disgrace what happened to Otto. That should never ever be allowed to happen," he said Tuesday. "Otto's fate deepens my administration's determination to prevent such tragedies from befalling innocent people at the hands of regimes that do not respect the rule of law or basic human decency."