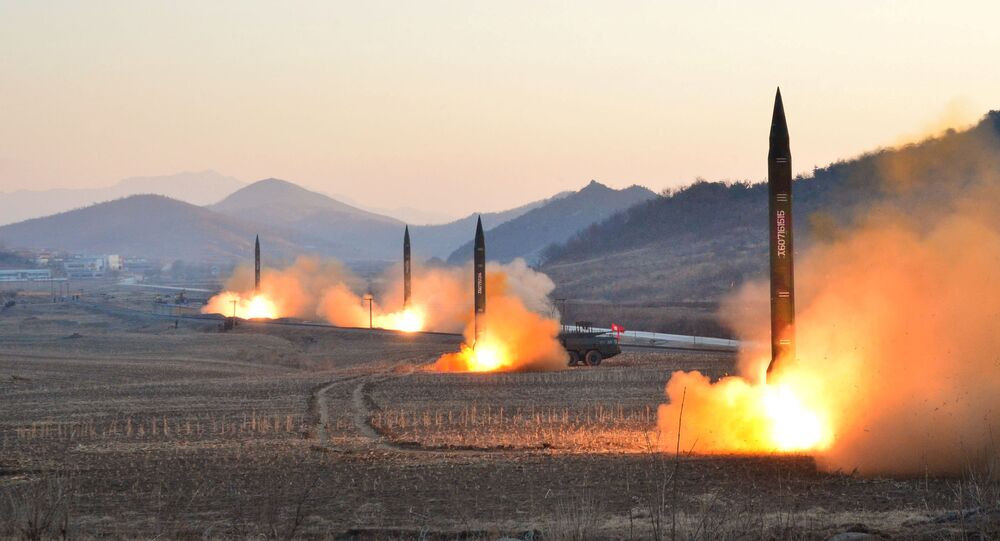 The US is now showing off its military might in the Korean peninsula because it has exhausted non-military means of resolving its differences with Pyongyang, according to political analyst Vladimir Batyuk.

Having imposed as many sanctions as possible on North Korea, the US government has run out of non-military measures and its next move in the conflict could be a declaration of war, director of the Russian Academy of Sciences' Center for Military and Political Studies Vladimir Batyuk told RIA Novosti.

"As far as sanctions are concerned, it's not possible to toughen them any further. The US doesn't have any trade relations with the country. Any further measures are simply a declaration of war," Batyuk said.

Relations between the US and North Korea had deteriorated in recent months, as Washington demanded an end to Pyongyang's development of ballistic and nuclear missiles.

© REUTERS / Kim Hong-Ji
Russia Fulfills All Obligations Under UN Resolutions on North Korea - Moscow
On June 2, the UN Security Council expanded targeted sanctions against North Korean companies and individuals after its most recent missile test in May.

Last week, 22-year-old US national Otto Warmbier was returned to the US, in a coma, after spending 17 months in captivity in North Korea.

He had been sentenced to 15 years of hard labor for stealing a political poster from the Yanggakdo International Hotel where he was staying during a tourist jaunt to Pyongyang in January 2009.

Suffering from brain injuries, Warmbier died on Monday. US President Donald Trump called his death a "total disgrace," and appeared to criticize the Obama administration for failing to return him to the US sooner.

© AFP 2021 / KIM JAE-HWAN
Test Imminent? Activity at North Korean Nuclear Site Has US Intelligence Worried
Since Warmbier's death, the US has sent B1 bombers to fly over the Korean peninsula in a show of military strength, having already sent the USS Carl Vinson aircraft carrier to the region in April.

However, earlier this month South Korea delayed deployment of the US THAAD missile system, after new President Moon Jai-in ordered an environmental impact assessment in the area where four additional Terminal High Altitude Area Defense (THAAD) launchers were to be deployed.

Two missile launchers were already deployed to the town of Seongju in April, despite popular protests.

On Thursday, North Korea hit back at the US and South Korea, calling the US President a "psychopath."

"South Korea must realize that following psychopath Trump…will only lead to disaster," said an editorial in Pyongyang's Rodong Sinmun paper.