China 'Would Be Better Off Legalizing Gambling' as Australians Charged

Seventeen employees of an Australian company remain in custody in China accused of promoting gambling. The charges against employees of Crown Resorts are set against China's campaign to crack down on corruption.

Crown Resorts is a casino company run by James Packer, the son of legendary tycoon Kerry Packer. It runs casinos in Melbourne and Perth as well as online betting websites.

​​But the Australian betting market is tiny in comparison with mainland China and Macau.

Macau is a tiny former Portuguese colony which was handed back to the People's Republic of China in 1999 and three years later local gambling tycoon Stanley Ho lost his local gaming monopoly.

Macau, like Hong Kong, operates under the "one country, two systems" umbrella and Beijing has never tried to interfere with its economy, which is largely based on gambling.

It is the Las Vegas of Asia, and in fact has a bigger turnover than Sin City — around US$55 billion a year.

© AFP 2019 / ANTHONY WALLACE
Tourists look at a replica of the Eiffel Tower after the opening of the Sands new mega resort The Parisian in Macau, on September 13, 2016. Billionaire casino tycoon Sheldon Adelson predicted a revival for beleaguered Macau as he launched his new Paris-themed mega resort, with the gambling enclave betting its fortunes on mass market tourists.

In August, US billionaire Steve Wynn will open his new US$4 billion Wynn Palace resort on Macau's Cotai Strip and another Las Vegas tycoon, Sheldon Adelson, is opening The Parisian Macau in September.

James Packer was another foreigner who saw money to be made in Macau and he went into business with Stanley Ho's son, Lawrence. 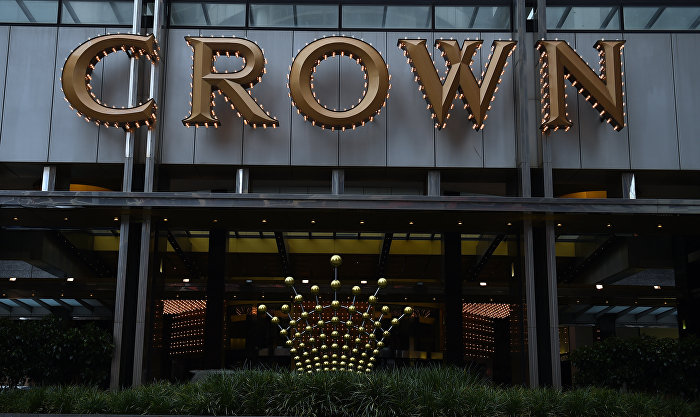 © AFP 2019 / SAEED KHAN
But Packer's train hit the buffers in October last year when 17 of his employees were arrested in China. ​Last month the 17, who include three Australian nationals, were charged with offenses relating to the illegal promotion of gambling on the Chinese mainland.

The most prominent of them was Jason O'Connor, Crown Resorts' senior international VIP manager.

His role, it is understood, was to look after the many mainland Chinese "high rollers" who came to Macau, and increasingly to Australia, to gamble.

Chinese gamblers were understood to be fundamental to Packer's huge new Barangaroo casino in Sydney.

The two other Australian nationals — both of Chinese extraction — are Pan Dan and Jerry Xuan.

The Crown Resort employees are due to appear before the Baoshan District Court in Shanghai on Monday (June 26).

The crowd came & @usainbolt delivered, playing his favorite tunes to get the party going at a packed Club 23 last night. #CrownMelbourne pic.twitter.com/4FfxYDeziR

Under Chinese law it is illegal to promote casinos on the mainland and companies can only promote hotels, restaurants and entertainment facilities within their resorts.

President Xi Jinping launched a major campaign against corruption recently and one facet of this is Operation Chain Break, which is aimed at stemming the flow of corruptly-obtained cash to foreign casinos.

Fred Lord, director for anti-corruption and transparency with the Qatar-based International Center for Sport Security, said:

"In China and South-East Asia gambling is heavily entrenched in their culture. If you legalized it [in mainland China] you could regulate it and tax it," Mr. Lord told Sputnik.

"But there is a lot of government-based corruption in China and the only way to get your money out was through gaming.

"Xi hasn't left anyone untouched, from the tiger to the fly," he added.

Mr. Lord said it was not clear what the Crown Resorts officials had been doing in Shanghai.

Steve Wynn has described Wynn Palace in Macau as "the most ambitious" project undertaken by Wynn Resorts. Magnificent. #PearlRiverDelta2017 pic.twitter.com/jqbkTN7xHb

​"They may have been there to collect a bad debt or just to get people to come and gamble directly [in Australia]," he told Sputnik.

Because of the difficulties of getting money out of mainland China it is thought that some "high rollers" had been offered a deal similar to the Indian hawala system, where they could gamble in Crown Resorts casinos and Packer's agents in China would collect any debts they accrued.

Packer has now sold his share in Macau-based Melco Crown, and his former business partner Lawrence Ho recently criticized him for his apparent naivete in dealing with mainland China.

"That's what caught their attention, 'Like what the hell, you're deliberately spitting on our faces.' "