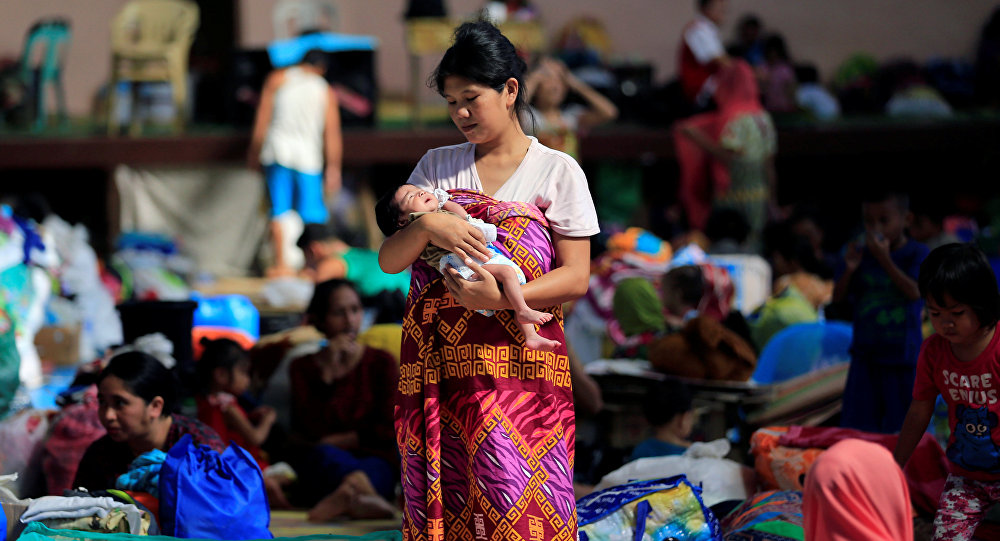 Foreign Minister said that Australian Government is providing food and other supplies to help meet the urgent needs of more than 320,000 displaced residents of the Philippines.

© REUTERS / Romeo Ranoco
Manila Sunrise: Japan’s Abe Signs 1 Trillion Yen Aid Package to Philippines
MOSCOW (Sputnik) – Australian authorities have allocated 920,000 Australian dollars ($699,800 at the current exchange rates) for humanitarian assistance to 320,000 residents of the Philippines that have been displaced due to the conflict in the southern part of the country, Australian Foreign Minister Julie Bishop said Tuesday.

"The Australian Government is providing food and other supplies valued at $920,000 to help meet the urgent needs of more than 320,000 displaced people," the minister said in a statement published on her website.

Bishop added that Canberra was also providing Manila with over 500 tonnes of pre-positioned rice through the World Food Programme, in order to feed some 60,000 children.

The tensions between the Philippine government forces and the Maute group, which is affiliated with the Islamic State terror organization, which is banned in Russia among other states, in the southern part of the country escalated in May, when the group made an attempt to storm the city of Marawi. As a result, dozens of people, including civilians were killed, wounded and thousands more were displaced.

"Australia’s assistance of $15 million will provide vital protection services, healthcare and nutrition to Afghan refugees in Pakistan, people returning from neighbouring countries, people displaced by conflict and host communities in Pakistan. It will focus on protecting the most vulnerable, including women and children and people with disabilities," the statement read.

The ministry added that the assistance would be provided through UN High Commissioner for Refugees, UN Children’s Fund, International Organization for Migration, and the UN Population Fund.

According to the UN data, over 3 million of Afghan people had to flee their homes and become refugees as a result of the ongoing instability in Afghanistan caused in particular by the actions of the Taliban radical movement and the Islamic State terrorist group, both outlawed in Russia.

Australia Suspends Airstrikes in Syria After US Downs Syrian Jet