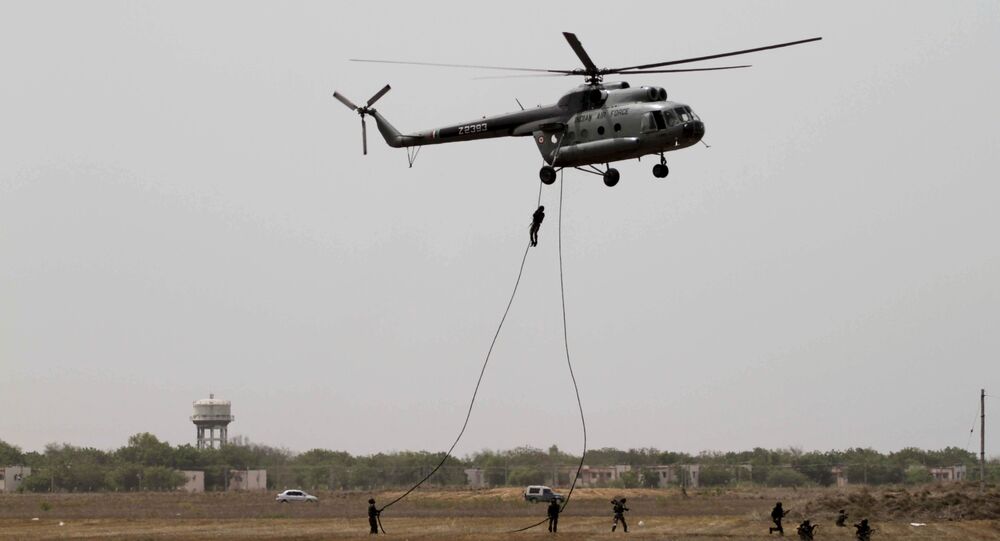 India's Defense Ministry issued a request for information (RFI) from arms manufacturers, aiming to beef up the Garud Commando Force, a special unit of the Indian Air Force (IAF).

New Delhi (Sputnik) — Suppliers will have to respond to the IAF by July 8. The RFIs suggest the IAF will recruit 8,000-10,000 more people for the Garud force to protect 54 IAF base stations. The terror attack on Pathankot air base last year forced India to provide advanced weapons and equipment to the IAF commandos.

© AFP 2021 / DIBYANGSHU SARKAR
Indian Air Force Sukhoi Jet Goes Missing Near China Border
The request points to likely acquisition of 50-60 armored vehicles along with military equipment to protect its personnel during operations. The IAF needs a 5-meter-long vehicle with a crew capacity of six for its special forces. Among other specifications, the IAF has demanded a minimum 350-kilometer operating range with a speed of 100 kmph on a level highway. The vehicles will be designed in such a way that the Garud forces would be able to mount and fire a 5.56mm light machine gun.

The IAF will also equip its commandos with 600 7.62mm rifles with sights and accessories and 200 40mm under-barrel grenade launcher compatible with it.

Garud Commando Force will also receive approximate 1,800 sub-machine guns and 2,000 9mm pistols, according to the RFI issued by the Indian Air Force.