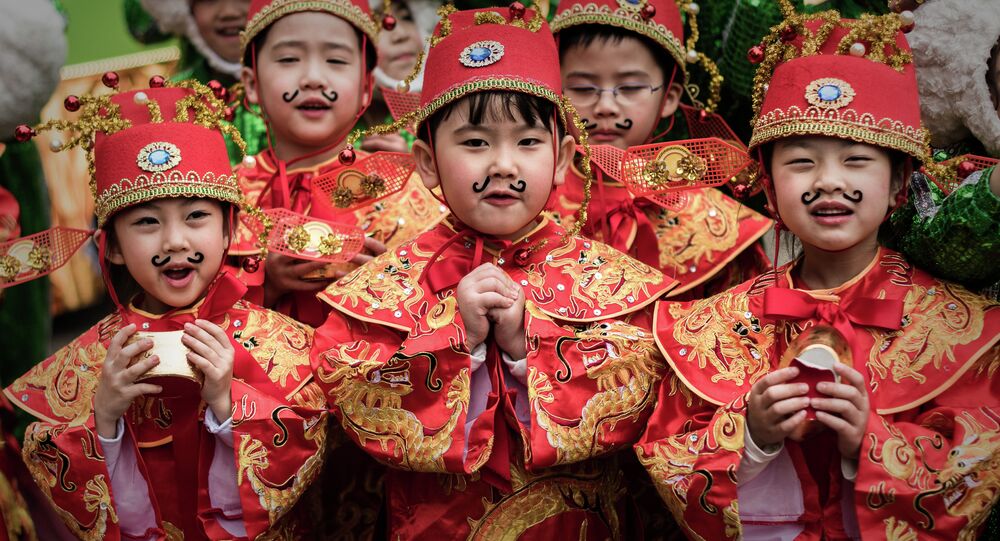 Wang Qiang (pseudonym) has to walk two hours to school in a mountainous village in Xinhuang county, Central China's Hunan Province. But the 7-year-old enjoys school - and his free lunch there.

Students like Wang once endured hunger and health problems because their families were too poor to afford a daily lunch. This meant no meal for 10 hours. Most had to drink water to appease their grumbling stomachs.

Hunger caused malnutrition, which affected their physical and mental development. According to a report on nutrition and chronic diseases by China's National Health and Family Planning Commission in 2015, rural children under six were two to three times more likely than urban children to suffer low weight and developmental delays.

This troubled investigative journalist Deng Fei, who was researching rural problems across the country: "It shocked me. I couldn't believe thousands of children are still struggling on one meal a day despite China's rapid economic growth. They said there's no such a thing as a free lunch. Why couldn't we make it happen?"

In April 2011, he started Free Lunch for Children (FLC), the first public charity initiative to offer free lunches to students in remote, poverty-stricken areas, with the help of 500 like-minded journalists, lawyers, professionals, low-level officials and volunteers. Over the last six years, it has raised 270 million yuan ($39 million) and feeds 190,000 students a day at 738 schools in 26 provinces or autonomous regions. FLC inspired a government plan. Since 2011, the central government has earmarked at least 16 billion yuan per year to properly feed poor students in rural areas from their first year at school on words.

But its three yuan for a meal is not enough. Many schools cannot build a canteen or hire a cook, so they provide just milk and bread.

Deng said in a speech on the sixth anniversary of the FLC that it still has a big role to play. "Our program is still going strong. On the one hand, we provide free lunches to children in poverty-stricken areas not covered by the national plan; on the other, we give money to help schools that need infrastructure and resources."

Local authorities are backing FLC. In May 2011, Deng's team established a new delivery model with Xinjiang county: for every one yuan the local government pays for meals and building canteens, Deng's team pays two yuan.

The initiative now covers all education centers, kindergartens and schools in Xinjiang.

The county's deputy mayor Yao Haiyan recalls when the first new kitchen began working and 59 students ate their first free lunch: "The meal was rice, fried pickles and beef, stir-fried potato and tomato soup. Many children wolfed down their meals."

Yao says the county government spent a lot setting up canteens and drawing up strict food safety measures. A special FLC account means the bill for each meal goes public on social media.

"Corruption is not a problem — every penny is marked down for transparency," says Yao. "The students are no longer hungry and they love learning. Our students often rank top in the city." Deng is glad to see more children having a free lunch, but he says many children are still trapped in the problems of poverty.

Many rural families remain poor. Parents go to cities to make money, leaving their children with the grandparents. There is no timely treatment when they get sick. "Even for better-off families, a serious disease is quite likely to throw them back into poverty. That's why we introduced the critical illness insurance program for rural children," says Deng.

The national critical illness insurance program and commercial insurance go hand in hand, with government, family and the charity each contributing.

Xiong Min, deputy mayor of Hefeng county in Central China's Hubei Province, says the program has helped more than 400 families in this county since 2012.

© CC0
As 'Kidphobia' Becomes Prevalent in China, some Say It's a Byproduct of One-Child Policy

Deng's team is working on other practical charity programs. One provides poor students with life and study supplies; one teaches rural children about personal safety, one builds movable dormitories for rural students who must walk long distances to school, and one recruits urban families to support rural orphans or left-behind children.

"We also run a program called E-Farmer Spring, which aims to help villagers sell produce to improve their incomes. This way, we attract parents of left-behind children back home," says Deng. Critics say the problems of China's rural poor are too great to solve through micro-philanthropy, but Deng says his programs have a role in shaping government policy.

"Charities cannot and will not replace the government. But so long as the government, enterprises, and charities work together, a social empowerment model is built. We have succeeded in Xinhuang and Hefeng and we believe these programs can take root in other poor areas," says Deng.

This article was originally published by Xinhua, in the Global Times.