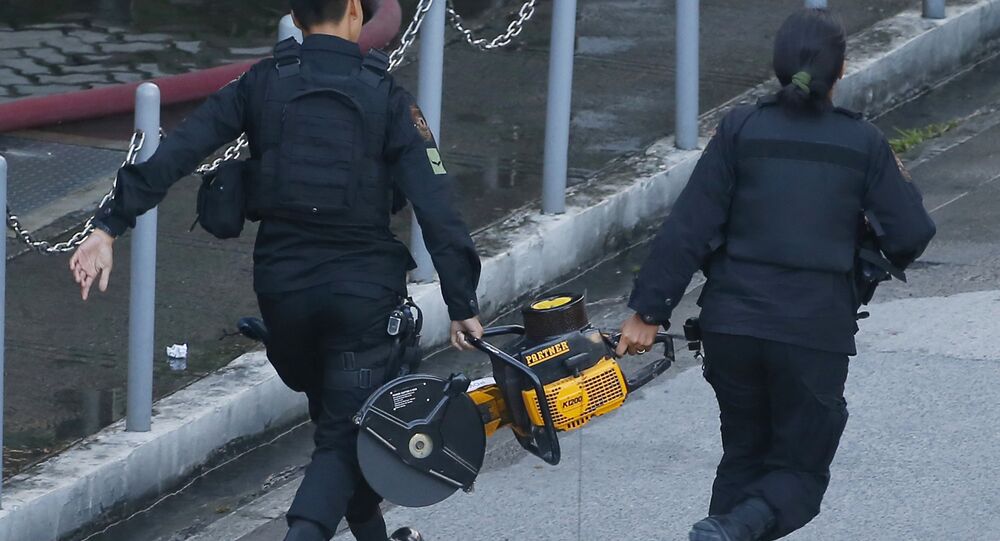 Philippine President Rodrigo Duterte has claimed that the bloody casino attack in the capital on Friday that killed 37 is not the work of Daesh.

"That is not the work of [Daesh]," Duterte said on Saturday regarding the attack by a lone gunman at the popular Resorts World Manila casino.

"The work of the IS is more cruel and brutal," he added.

Daesh, on the other hand, publicly claimed responsibility for the attack and named who they say was the shooter, Philippine native and purported jihadist Abu al-Kheir.

On Friday a lone gunman — described as a tall, athletic Caucasian male who spoke both English and Filipino and was armed with an M4 assault rifle and cans of what is believed to have been kerosene — set fire to areas inside the casino before stuffing some $2.2 million worth of playing tokens into a knapsack.

The deaths in the attack came from asphyxiation, as people trapped inside choked on the heavy smoke that filled the facility. Some 80 were injured, also mostly due to smoke inhalation.

Following a firefight with casino security, the gunman was found dead in an upstairs room, with his body burned beyond recognition and a self-inflicted gunshot wound to the head, according to police reports.

Local law enforcement echoed Duterte's assertions. "If he is really a terrorist, he could have shot everybody there," said Manila Police Chief Oscar Albayalde. "He just burned the casino as probably a diversionary tactic for his escape."

As the attacker's identity has not yet been revealed, questions remain concerning his race and nationality.

"[Daesh] may claim credit but, ­according to evidence, it is not so," a spokesperson for Duterte said, cited by the South China Morning Post.

"Evidence at this stage points to the actions of an emotionally disturbed person who was apparently engaged in criminal actions," added the spokesperson.

Government officials were quick to dismiss Daesh's role. "This is a clear example of a 'lone wolf' terrorist attack targeting civilians to inflict maximum loss of life and damage to property, as what has happened in other countries," said House Speaker Pantaleon Alvarez, cited by Deutsche Welle.

"Our authorities should get their act together and put in place the highest level of security measures to prevent this from happening again, here or elsewhere in the country," he added.

The attack on the Manila casino comes as Philippine army forces are battling Daesh-allied extremists in Marawi City, about 500 miles south of the capital city. More than 180 people have been killed and some 100,000 have been displaced in the ongoing fighting, and Duterte has placed the entire country under martial law. The Philippines top general was also recently sacked, reportedly due to his failure to recognize Daesh's imminent threat to Marawi.

This is What May Stop Duterte From Buying Advanced Russian Weaponry