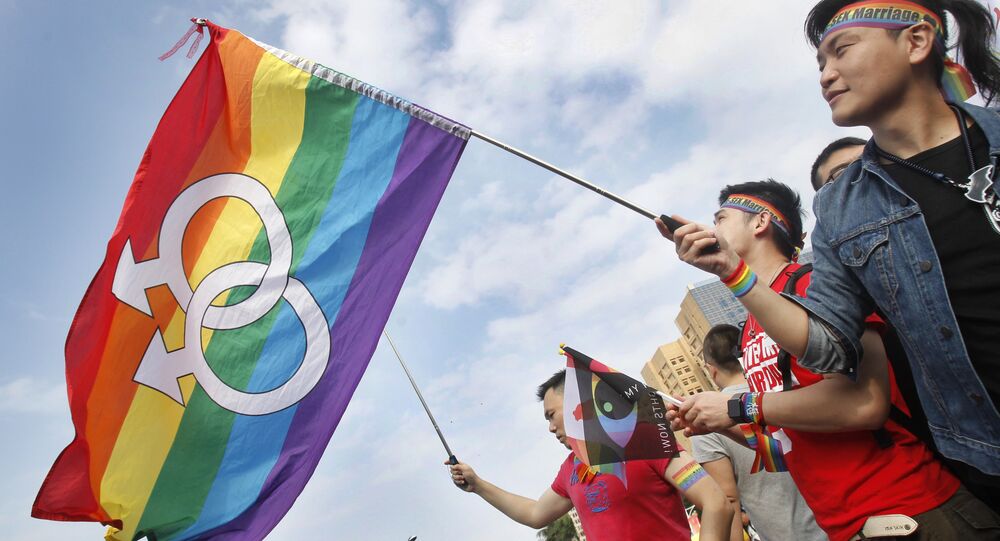 On May 23, Taiwan's top judges ruled that the island's current marriage law goes against its "constitution," and ruled that legislators will now have to draft a new marriage law which allows same-sex couples to get married within two years.

However, even before the new marriage law is passed, the court has said that same-sex couples can get married based on its interpretation, making Taiwan the first place in Asia to allow gay marriage.

The latest ruling has sent ripples through the Chinese mainland as well inspiring heated discussions and debate both online and offline. While some gay people on the mainland view it as a positive signal and hope the mainland will follow suit in the future, others are more cautious about overstating the possible effects of the ruling.

Outside the LGBT community, many mainlanders have expressed their opposition to the ruling. Speculators say in recent years, public views on social issues on the Chinese mainland and Taiwan have grown further and further apart, but some still hope there's a chance for reconciliation.

Sun Wenlin became the first person in the Chinese mainland to sue the government over gay marriage when he filed a case against the civil affairs bureau of Changsha, Central China's Hunan Province after it rejected his marriage application.

Though he lost the lawsuit, 28-year-old Sun's campaign to push forward the legalization of same-sex marriage in the mainland has not stopped.

"Taiwan and the mainland have the same cultural roots. If Taiwan can legalize same-sex marriage, it's possible for the mainland to approve it too," Sun told the Global Times.

He hopes that this can be achieved either through a court making a judicial interpretation or a direct order from the government.

Li Yinhe, a sociologist at the Chinese Academy of Social Sciences, previously told the Global Times that it would be a good idea to establish some kind of official channel for sexual minorities to express their opinions.

After being rejected by the civil affairs bureau and the court, Sun has tried to talk with people from all walks of life to spread his message. He believes that if he can persuade more people to join him, they can push forward legal changes. "But this will require money. And so far I can't find any public foundations who are willing to invest," he said.

Despite a lack of funds, Sun is now devoting all his energy to his project to hold 100 gay wedding ceremonies in China. So far he has successfully hosted three ceremonies.

"I will continue the project until same-sex marriage is approved in the Chinese mainland," Sun said.

While Sun is optimistic about the chances of change, Ah Qiang, founder of gay rights NGO Parents and Friends of Lesbians and Gays China (PFLAG), said that they won't take any new actions following the Taiwan ruling. He added that "now is a sensitive time" to organize LGBT events.

He didn't offer further explanation about how this "sensitivity" is affecting PFLAG, but several other LGBT activists contacted by the Global Times expressed the same concerns.

In May, an event at which gay people were supposed to deliver inspirational speeches on May 28 to encourage other members of the LGBT community, was canceled.

According to an announcement from gay rights NGO Speak Out, the event's organizer, their staff spent more than three months preparing for the event in Xi'an, Northwest China's Shaanxi Province.

"We don't know what has happened. Different people give us different explanations and I can't trust them," the announcement said.

Last month, 11 mothers went to Shanghai's People's Park, a popular matchmaking spot, to find partners for their gay children. But just one hour after they arrived and set up their rainbow umbrellas and placards, they were asked to leave by local police who said they hadn't registered in advance, reported news portal thepaper.cn.

WeChat public account "Pretending to be in New York" published an article commenting on the recent development in Taiwan, writing that "in the blink of an eye, Taiwan has gone so far, they are so fast that they have gone beyond what we could see and reach."

The author is a popular commentator who often writes about world news. He called Taiwan the "light of Asia" for its groundbreaking move and analyzed that this achievement is due to endless efforts by Taiwan people, first the pioneers who brought these issues into public view and then the public who embraced new ideas.

He thinks this advancement is not only about the LGBT community, but about the advancement of all civil rights, and the mainland should also make moves toward eliminating inequality of all kinds.

However, some argue that the mainland public does not have much awareness of not only gay rights, but all kinds of issues regarding equal rights.

Observers in the mainland LGBT community say that the incidents which followed the Taiwan court's move, such as the cancellation of the Xi'an event, dampened mainland optimism and showed the differences between the different sides of the straits.

Li Xiang (pseudonym), a member of Beijing's LGBT community, told the Global Times that the gay rights situation in the Chinese mainland is "grim" and that there are many differences between Taiwan and mainland society on social issues.

"There's more public support in Taiwan, more discussion and more media support," he said. "On May 17, the International Day against Homophobia, more than 115 stars in Taiwan stood up in support of the LGBT community, which is impossible in the mainland."

Meanwhile, in the Chinese mainland, there is little media attention given over to gay rights. Indeed, Chinese language forums show that many non-LGBT mainlanders have taken a dim view of the changes in Taiwan.

On mainland news website guancha.cn, the comment section on the website's article about the gay marriage ruling is filled with mockery and insults against Taiwan and its residents, saying they are looking to catch attention or that they just want to shock others.

In recent years, there has been a lot of speculation that the people of the Chinese mainland and Taiwan are growing apart, especially when it comes to social issues.

A Taiwan woman who works in the mainland told the Global Times she has felt a culture gap between her home and the mainland, including mainlanders not caring about the same things as her.

"I get the feeling that they mostly want to talk about economic development and have more of a nationalistic sense of pride about the country," she said.

According a report by the Taiwan-based China Times, surveys of the region's residents showed that from 2013 to 2014 the percentage of people who identified themselves as Chinese went down from 61 percent to 47 percent.

These changes have been met in the mainland with pro-forceful reunification sentiments. A 2016 survey conducted by the Shanghai Academy of Social Sciences showed that more than 85 percent of the around 15,000 mainlanders who took part said they support reunification by force.

Li said he's hopeful that the mainland and Taiwan can narrow their gap when it comes to gay rights. He optimistically thinks what happened in Taiwan in the long term can bring forward the LGBT movement across Asia. He knows people who have plans to get married in Taiwan, or have been so encouraged by the news that they have decided to come out to their friends and family.

"We've also seen some improvements in the mainland, such as a hashtag appearing on (social media platform) Sina Weibo that discusses the legalization of gay marriage in Taiwan," he said. "I personally hope these gestures are helpful to the situation."