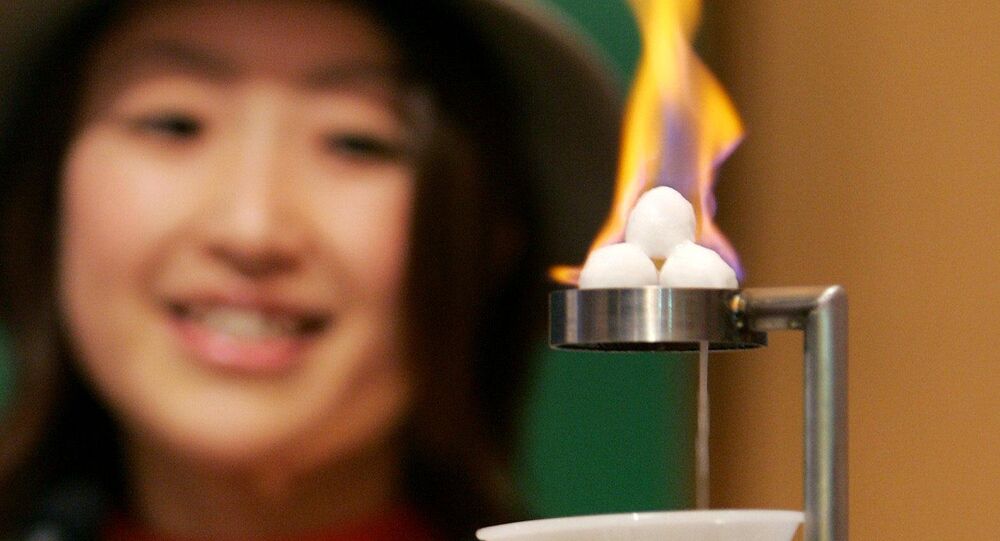 China, Japan invested heavily in the extraction of natural gas from methane hydrate, also known as "fire ice" or "combustible ice," to ensure both nations’ long-term energy security, according to experts.

MOSCOW (Sputnik), Tommy Yang — Despite technological huddles and the potential environmental impact, China and Japan have both invested heavily in the extraction of natural gas from methane hydrate, also known as "fire ice" or "combustible ice," to ensure both nations’ long-term energy security, experts told Sputnik.

China’s research into methane hydrate dominated headlines globally last week, when Chinese Minister of Land and Resources Jiang Daming announced that the country made a major breakthrough in the research and exploration of the flammable ice buried deep under the South China Sea that may lead to a global energy revolution. China Geological Survey, the government agency in charge of the country’s methane hydrate research project, said Chinese scientists successfully extracted about 120,000 cubic meters (42,000 cubic feet) of natural gas for eight consecutive days since May 10, with an average production rate of about 16,000 cubic meters of gas per day.

© REUTERS / Wu Hong/Pool
India, Japan to Launch Their Rival to China's OBOR
At the same time, natural gas production started successfully from methane hydrate deposits off Japan’s central coast on May 4, during the second gas production test launched by Japan’s Agency for Natural Resources and Energy, the nation’s Ministry of Economy, Trade and Industry (METI) said in a statement in early May. Japan first conducted a natural gas production test from methane hydrate successfully in March 2013, when approximately 120,000 cubic meters of natural gas were produced during a 6-day testing period, archiving a production rate of about 20,000 cubic meters of gas per day. A pump malfunction, sand and rough weather conditions at the test site forced Japanese authorities to end the test production.

Methane hydrates are solid ice-like crystals formed from a mixture of methane and water at specific pressure and conditions, usually under hundreds of meters of water, or closer to the surface in Arctic permafrost. According to the US Energy Information Administration (EIA), worldwide reserves of global hydrate resources are estimated to range from 280 trillion cubic meters (10,000 trillion cubic feet) up to 2,800 trillion cubic meters (100,000 trillion cubic feet), more energy content than all the world's coal, oil and natural gas combined. At the current consumption rates globally, methane hydrate reserves could meet global gas demands for 80 to 800 years.

Despite current technology for methane hydrate extraction and production being far from commercially feasible, both China and Japan are betting on the massive potential of the flammable ice to safeguard the nations’ long-term energy security, experts said.

"Although it’s costly for them to develop such technologies [for methane hydrate production], it’s still very important for their national energy security, especially for Japan where over 90% of their energy consumption comes from imports," Amadeu Sum, a professor who studies methane hydrate at the US Chemical and Biological Engineering Department of Colorado School of Mines, said.

According to the US Energy Information Administration (EIA), China and Japan are the world’s largest net importers of fossil fuels. With limited natural gas resources, Japan relies on imports to meet almost all of its natural gas needs, especially after the nearly complete shutdown of its nuclear power stations since the Fukushima nuclear disaster resulted from the catastrophic earthquake and tsunami in March 2011.

© AFP 2021 / STR
China, Japan, South Korea Vow to Fight Protectionism After G20 Drops Commitment
Only three of the nation’s 45 commercial nuclear reactors were still in operation as of April this year. The nuclear reactors in Japan carry a total capacity of 46.15 GW, which accounts for about 20 percent of the nation’s total installed power generation capacity of 225.667 GW.

Japan has been the world’s largest importer of liquefied natural gas (LNG) for many years. In 2011, to compensate the energy vacuum created by the shutdown of nuclear reactors, Japan boosted its annual LNG import to 78.5 million tonnes, up 12 percent from 2010, according to data from the nation’s Ministry of Finance. Its annual LNG import surged to a record 88.51 million tonnes in 2014, while paying a record $66.67 billion for LNG imports, a rise of 11.2 percent from the previous year.

Massive spending on energy imports led Japan, the world’s third largest economy famous for its exports of automobiles, consumer electronics and semiconductors, to post trade deficits for five consecutive years until 2015. Its trade deficit skyrocketed to a record $107 billion in 2014.

Thanks to slump in global oil and natural gas prices in recent years, Japan paid $28.9 billion for its LNG imports in 2016, a 56.7-percent drop from its spending in 2014, in spite of maintaining an annual import of 85.05 million tonnes of LNG last year.

A similar story is taking place in China. After overtaking the United States as the world’s largest energy consumer in 2010, China’s energy demand stayed at astronomical levels to support the rapid growth of the world’s largest economy, in purchasing power terms. Official figures showed China’s total energy consumption stood at 4.36 billion tonnes of standard coal equivalent, with the share of coal continuing to dominate at 62 percent. But China’s reliance on coal also caused serious environmental implications, as most of the cities in northern China are shrouded in choking smog, especially during the winter when coal helps keep millions of households warm.

© REUTERS / Kyodo
Countering Chinese Advances, Japan Scrambles Record Number of Jets
A study from Nanjing University’s School of Environment estimates about one third of deaths in China are related to the toxic smog. Chinese authorities have vowed to improve the nation’s air quality and planned to move away from China’s reliance on coal.

Although China’s reliance on natural gas imports is not as strong as Japan, the US EIA projects Beijing to import about 35 percent of its natural gas demand by 2020, as Chinese authorities view it as a preferred alternative to coal.

China’s LNG imports grew by 33 percent in 2016 to 26.06 million tonnes, making it the world’s third largest LNG importer behind Japan and South Korea, official figures from Chinese customs showed. China and Japan accounted for about 43 percent of global LNG imports in 2016, according to data from the International Gas Union.

"Both China and Japan are looking to diversify their energy portfolio," said Sum.

NO ENERGY REVOLUTIONARY IN SIGHT

© REUTERS / Toru Hanai
Does Growing Mutual Trust Between Russia, Japan Threaten China?
Chinese authorities pledged to invest $100 million into research and development of methane hydrate extraction technologies, the nation’s National Development and Reform Commission said in a report in 2006. Officials from the oil and gas division of Japan’s METI said Tokyo allocated a budget of around $180 million for offshore production experiments of methane hydrate.

But despite heavy investments from both Chinese and Japanese governments, commercial production of natural gas from methane hydrate is still many years away and it is impossible to bring about an "energy revolution," hyped by many because of the massive potential in methane hydrate reserves globally, experts said.

"Commercial production could start within 10 years. But only a small fraction of the large numbers of methane hydrate reserves is recoverable… China and Japan will never become natural gas exporters," Sum said.

According to Downey, the minimum capital costs to install a floating production platform in 5000 feet (1500 meters) of water capable of withstanding heavy storms in the ocean, as well as the deep water pipelines to support the gas production, will require a billion cubic feet (28 million cubic meters) of natural gas to be produced per day and be deliverable for 20 years, to make it an attractive investment.

The production tests of methane hydrate completed by Chinese and Japanese scientists were only capable of producing 16,000-20,000 cubic meters of natural gas per day. Japan’s EMTI aimed to reach a sustained flow rate of 55,600 cubic meters of natural gas per day, a level the ministry estimates could start commercial production of natural gas at around $16 per mmbtu (one million British Thermal Units). But the average price of spot LNG for delivery into Japan was $5.7 per mmbtu.

"Scientifically, it is a good achievement. But economically, I don't think it will change the prospect of the global oil and gas industry," Bahman Tohidi, a professor at Institute of the UK Petroleum Engineering of Heriot-Watt University. said.

© Sputnik / Grigoriy Sisoev
Chinese, Japanese FMs Agree to Improve Bilateral Relations During Bonn Meeting
In addition, despite being cleaner than coal, methane hydrate is still a fossil fuel that can contribute to greenhouse gas emissions that have caused climate change globally. Burning of methane produces water and carbon dioxide, which is the main greenhouse gas emitted into the atmosphere from human activities. Methane itself is also considered one of the four major greenhouse gases.

"Many countries in Europe are moving away from fossil fuel such as oil and gas towards solar, wind and tidal energy," Tohidi said.

Public opinion is thus against any fossil fuel development, including combustible ice, he stressed.