© CC0
What Possible Revival of 'Tiger' Fighter Jets Could Mean for Vietnam's Aviation
May 19 marks the anniversary of Ho Chi Minh, the first President of the Democratic Republic of Vietnam who was born on that day in 1890.

Having led the communist-dominated independence movement Viet Minh in its battle against Japanese occupation during World War Two, Ho Chi Minh declared independence from French colonial rule in 1945 and resisted France's attempts to regain control of its former colony.

In 1954, after Vietnam was partitioned into North and South during peace talks in Geneva, he became President of North Vietnam and continued his efforts to reunite the country. After his death in 1969, a guerilla war against the US-backed South Vietnam government continued until 1975, when the North took control of the South and its capital Saigon, which was renamed Ho Chi Minh City.

"On a visit to Vietnam in February 2001, Russian President Vladimir Putin became the first high-ranking foreign guest of the 21st century to visit the memorial sites of Hanoi which are associated with the first President of independent Vietnam. The Russian President left a note in the visitors' book," Tran said.

"He wrote, 'It was genuinely interesting for me to find out about the life of a great teacher of the Vietnamese people, a man whose name is inscribed in world history.'" 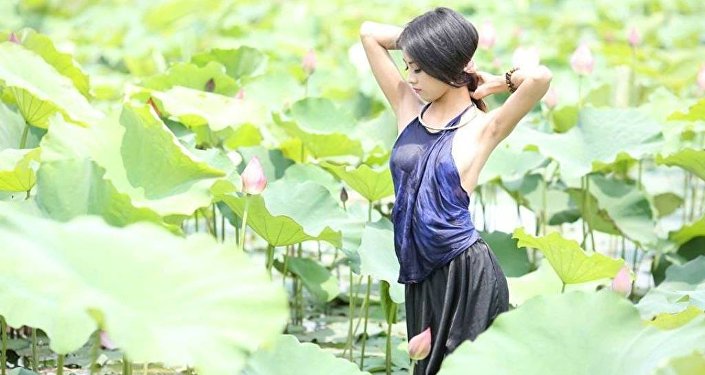 © Photo : Facebook / Nguyễn Thu Trang
Boobs and Butts: Vietnamese Girl's Nude Photos Wow Web Surfers
"Back then I was the director of the Ho Chi Minh Museum and I personally had the opportunity to guide the Russian President. Before saying goodbye, he asked me a question."

"Did you ever meet Uncle Ho in person? I told him that it was a great honor for me to serve as a personal bodyguard of Ho Chi Minh in the last years of his life. When the President passed away, the state and the people entrusted me with the great honor of guarding his body."

"This touched the Russian President very much, and he … invited me, my wife and two other companions to visit Russia, saying that we could fly out on his plane that day! I was sincerely grateful to the Russian President, but I replied that it's impossible to go right away, I need to get permission from the authorities."

"Then, the Russian President instructed the Russian Ambassador to Hanoi to work with the Russian Ministry of Culture to plan our stay in Russia. In January 2002, our small group went to Russia at the personal invitation of President Putin. When we arrived, we were greeted by the deputy culture minister."

"Of course, there were a lot of great people who guarded Ho Chi Minh, but I happened to be the one that the Russian President personally invited to visit his country and I consider this to be the second most important honor I have received. Thanks to the Russian President, my wife got the chance to learn a lot about the great country of Russia. My loved ones and I will always remember this trip," Tran Viet Hoan concluded.

At Least 11 People Killed in Collision in Central Vietnam