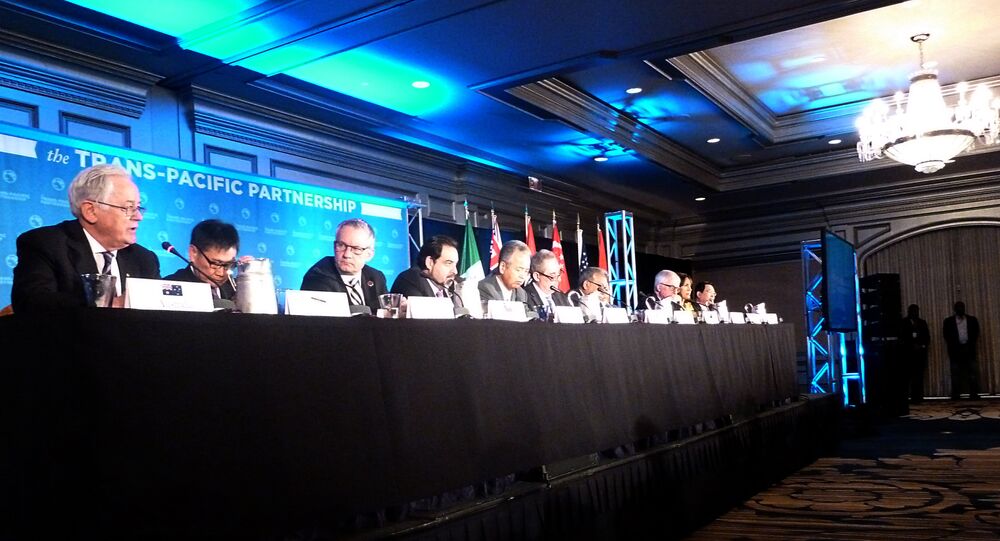 The US could yet return to the Trans-Pacific Partnership [TPP] trade agreement, which was actually a "very good deal for the US," trade policy expert Charles Finny told Radio Sputnik.

In January, US President Donald Trump appeared to kill off the Trans-Pacific Partnership [TPP] trade agreement after signing an executive order to withdraw from the deal, thus fulfilling one of his campaign promises.

Trump's move looked to have ended TPP, which had 12 signatories and proposed creating the world's largest free trade area, accounting for roughly 40 percent of global GDP.

However, the other signatories to the deal appear to be persisting with the concept. On Thursday, New Zealand became the second country after Japan to ratify the deal, just days before Prime Minister Bill English visits Tokyo for trade and business talks with Prime Minister Shinzo Abe.

"Cabinet's decision sends a clear message that we see value in a common set of high-quality rules across the Asia-Pacific and we are keeping all of our options open," New Zealand Trade Minister Todd McClay declared.

"TPP remains valuable both economically and strategically. It stands to improve access for New Zealand exporters and lower tariffs around the Asia-Pacific, including Japan, the world's third largest economy."

© REUTERS / Toru Hanai
Why It's 'Vitally Important for Japan to Sustain Relations Within TPP' Without the US
In order to make TPP work, its parties will have to change a clause in the agreement which states that at least six of the original signatories, making up 85 percent of their total GDP, have to ratify the agreement for it to go ahead.

Charles Finny, a trade policy expert and a former official and trade negotiator for New Zealand‘s Ministry of Foreign Affairs and Trade, told Radio Sputnik that trade ministers from the 11 remaining members may be able to reach an agreement and keep the deal alive.

"One possibility which will be discussed by trade ministers quite soon will be the possibility of all 11 going ahead and implementing [the agreement], that would obviously require that clause to be renegotiated," Finny said.

"There are other possibilities like a sort of side-agreement or an agreement that's almost identical except in name which would involve maybe a fewer number of the parties. So, all options are on the table but there is serious consideration being given to going ahead without the United States."

While it is unlikely that the US will rejoin TPP in the short-term, Washington's future membership of what was a "very good deal" remains a longer-term possibility, Finny said.

"This was a deal that was hard-negotiated, it was actually a very good deal for the United States. Obviously, during the election campaign Trump was trying to win lots of votes in the Rust Belt states and he was trying to be more protectionist than Hillary Clinton, he made lots of commitments and it will be very hard for him to go back in the short term."

"This was a very good deal for the US, US farmers are not going to get as good a deal as they would have if TPP had been implemented and entered into force and the US was a party. Hi-tech manufacturing, services, they were all going to do very well from this agreement, so over time pressure will build and hopefully, eventually the US will want to be a party to this agreement once again."

© AFP 2020 / TOSHIFUMI KITAMURA
No Thanks: China 'Would Get Indigestion' From Involvement in Failed TPP Project
Since the US withdrawal from the deal, Japan in particular has stepped up to take a leadership role in discussions about a new-look TPP. The country was the second-biggest economy in the proposed free trade zone and was first country to ratify TPP back in December 2016.

"What is very interesting is the leadership role that is being played by Japan, it's the next-biggest economy that was a part of the original process and it's quite clear the Japanese government is quite keen for something to happen around TPP."

"I think Mexico is quite pivotal as well and it will be really interesting to see what the Mexican government is prepared to commit to. Obviously, Mexico and Canada have got a double complication because President Trump is talking about re-negotiating NAFTA."

"The possibilities range from all 11 going ahead through to maybe just five and those most likely five would be Japan, Brunei, Singapore, Australia and New Zealand, those five seem to be the most committed to moving ahead," Finny said.

The development of the Pacific Alliance of Chile, Colombia, Mexico and Peru is also "really interesting to watch in this context," Finny said.

"They're looking towards Asia, Australia and New Zealand as well and that will be a big dynamic in whatever replaces TPP."