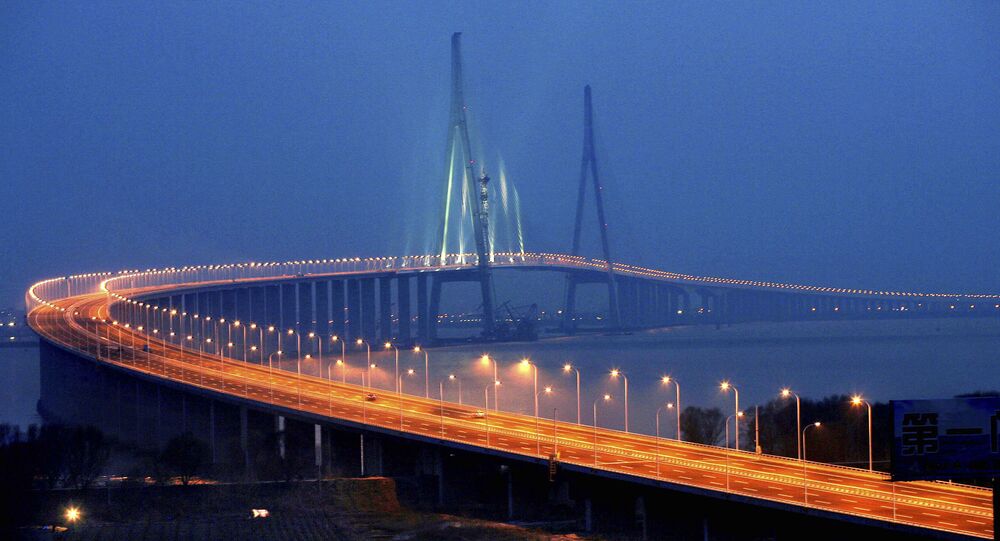 China-constructed infrastructures have been expanding at an unprecedented speed in recent years and their quality and efficiency have earned worldwide respect.

A delegation composed of influential users on social media platforms was recently invited by the News Center of State-owned Assets Supervision and Administration Commission (SASAC) of the State Council, China Communications Construction Company Ltd.(CCCC) and Huanqiu.com to visit the four projects.

These examples of heavy-duty construction have amazed the world by displaying the vitality of Chinese workers and redefining the term "Made in China."

By outdoing themselves and achieving what was previously unheard of, Chinese constructors managed to stretch to a span of 1,088 meters the Suzhou-Nantong Yangtze Road Bridge, surpassing the previous 900 meters regarded as the limit by international bridge experts.

While such an immense project does not get completed without its shortcomings and failures, such as small incidents which happened during the 2003-2008 period, builders finally placed 131 piles, with a length of 120 meters and diameter of 2.5 to 2.8 meters under the water. These piles are like chopsticks sticking into a tofu, but holding a giant pier base the size of a soccer field and height of a 6-storey building.

The piles are also of world-class quality. According to the constructor of the bridge Second Harbour Engineering Company of China Communications Construction Company (CCCC), it would have meant nothing if one of the 131 piles failed to meet the quality standards. Ultimately, the pile foundation achieved zero-defect quality under the joint efforts of each constructor.

The construction of the pylons was another challenge. With a height of 300.4 meters, the piles have been divided into 68 sections for pouring. The perpendicularity error from the top to the bottom of the pylons was required to be of less than 10 centimeters. However, a 5-centimeter displacement could happen under wind and temperature differences between the two sides of the bridge. Finally, the constructors applied a new method, calculating the perpendicularity by over 200 prisms installed on the bridge, and finally kept the error margin within 1 centimeter.

Next in line was the Shanghai-Nantong Yangtze River Bridge, whose steel consumption was equal to 68 Eiffel Towers or 12 Bird Nests.

"The Shanghai-Nantong Yangtze River Bridge is a representative of quality, and we will show China's ability to build such bridges to the world," said Yang Zhide, project manager from the Second Harbour Engineering Company of CCCC.

Upon arriving at the phase-IV Yangshan Port, the delegation was taken aback by the giant machines working on the harbor. According to Liu Guanghong, chief designer of the project, the quayside container bridge crane is worth 100 million RMB, and the automated guided carrier vehicles surpass the price of Lamborghinis. Liu noted that ingenuity is what sets phase-IV apart from phase-III.

"Though it is still in the debugging process, the new project is expected to reduce manual labor by 70% and increase efficiency by 30%," Liu said, adding also that 400 containers can be transported per hour.

It is estimated that the handling capacity of the Yangshan deepwater port has maintained a 20% annual growth, making Shanghai Port the world's largest container port since 2010. Changxing Island Production Base of Shanghai Zhenhua Heavy Industries was the last site arranged for the delegation. The production base resembles an exhibition of cranes, and many foreign orders have been placed for the machines. A container bridge crane has more than 3,000 spare parts, all of them produced in China.

© AFP 2021 / STR
First of Its Type: China to Test Next-Generation Hypersonic Engine
For 18 consecutive years, Shanghai Zhenhua Heavy Industries has been the bidding champion on the global port machinery market. Its market share has increased to 82% in 2016 from the previous 70%. More than 2/3 of the orders come from overseas customers, and more than 90% of the ports in western countries are using Zhenhua machines.

The company's executive director, Liu Qizhong, told Huanqiu that their technological innovation over the past years has catapulted them way ahead of competitors. He said every machine made by the company is customized for the clients, and more than 2,000 engineers are devoted to accomplishing perfection, a cost that many western companies simply are not willing to pay for.

Liu stressed that responsibility for the customers is the core of their success. He hopes his machines can one day be present on every port in the world.

Internet celebrities shared their experience on social media, and the hashtags "A trip of wonders to China's new state-owned enterprises" and "Contemporary miracles in China" topped on microblogging website Sina Weibo, arousing heated discussion and high appreciation among netizens.