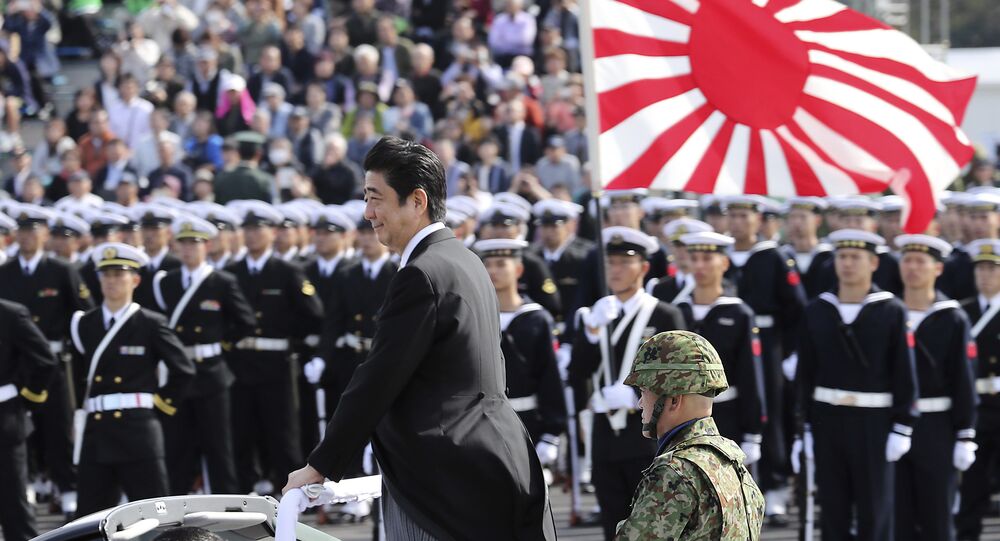 Japanese Prime Minister Shinzo Abe is setting the country on course for remilitarization, much to the exasperation of Japan's wartime enemies, China and South Korea.

On Wednesday, May 3, the outgoing nationalist Abe declared that he hopes to see a revised constitution implemented by 2020, when Tokyo is set to host the Olympics. The proclamation underscored what many have suspected up until now to be the prime minister's intention to move Japan away from its post-World War II pacifist posture, toward a more active one in the Asia-Pacific security environment.

Japan's constitution was rewritten in 1947 after the country's formal surrender to the allied forces in September of 1945. The constitution was largely constructed by a new Japanese government under the auspices of the allied powers, principally the United States. Although Japan made some reparations to the countries in which its army committed atrocities, namely South Korea and China, the allied forces sought more than its penitence. They uprooted the country's entire political system, including the removal of the Emperor Hirohito as executive head of state, and imposed the now notorious Article 9 on the Japanese constitution.

What marks Article 9 as unique, is its explicitly pacifist language. It states in explicit terms that Japan may never build, or maintain, a military force with war-waging capabilities.

"Aspiring sincerely to an international peace based on justice and order, the Japanese people forever renounce war as a sovereign right of the nation and the threat or use of force as a means of settling international disputes," the article says.

It adds that, "in order to accomplish this aim of the preceding paragraph, land, sea, and air forces, as well as other war potential, will never be maintained. The right of belligerency of the state will not be recognized."

The notorious article has bedeviled Japanese nationalists ever since. They argue that Japan, like any other sovereign state in the international system, has the right to maintain a military.

Japan currently has a self-defense force — the Japanese Self-Defense Forces (JSDF) — but many of the country's critics — namely China — accuse it of being nominal as it has taken part in refueling operations for the United States in Iraq. In addition, it has maintained an anti-piracy base in the Horn of Africa, and was given a mandate to use lethal force where necessary as part of an overseas contingent in South Sudan.

Since becoming the 57th Prime Minister of Japan in 2012, much scholarly ink has been spilled over the aspirations of the incumbent Shinzo Abe, who has been eyeing an abrogation of Japan's pacifist position for most of his career.

Professor Ra Mason, a specialist on Japanese international relations, told Sputnik of some of the moves that Abe has made toward remilitarization.

"Abe has been at the forefront of promoting his slogan of Proactive Pacifism, which has revolved around further normalizing overuse of the JSDF — for example in the Gulf of Aden and Sudan — and perhaps most critically further integrating seamless operations between the US and Japanese forces. All of this has then been expedited by the passing into law of Japan's official reinterpretation of Article 9, to allow collective defense. Moreover, while Abe may take 'credit' for this legislation being passed, in fact it builds upon less publicly well-documented integration between US and Japanese forces at Yokota Air Base's Bilateral Joint Operations and Coordination Center (BJOCC) and elsewhere, whereby Ballistic Missile Defense (BMD) command structures have, since 2004, been given the green light to increasingly share and operationalize information pertaining to US as well as Japanese targets within or surrounding Japanese waters. This, it can be argued, means that Japan has already been using the JSDF to assist in the defense of US military facilities, in blatant violation of Article 9," Professor Mason told Sputnik.

The reinterpretation of Article 9 has formed the nucleus of Abe's career. His first pop at the Prime-ministership was in 2006-7, but this was cut short because his position on remilitarization, which included the continued deployment of a Japanese support contingency in Afghanistan, was so woefully unpopular that he had to resign. Gradually however, Chinese maritime military muscle-flexing and frequent North Korean nuclear missile tests increased anxiety in Japan, giving Abe the opening he so yearned.

With a reasonably steady approval rating at the time — around 56% — Abe was able to push a bill through Japan's legislature — the Diet — in 2015, reinterpreting Artilce 9 of the constitution. After days of rancorous debate about its pacifist language — ironically culminating in a brawl in the parliament's upper house — it was decided that a reinterpretation of the constitution's definition of "collective self-defense" would be made.

This change meant that Japan would from then on be able to assist the US and other allies, if those allies were attacked. However, limitations still apply. For example, Japan would be able to provide logistical support to Seoul if North Korea invaded the South, but it would still be prohibited from sending troops to fight on Korean soil. Despite this historical move, the language of Article 9 remains unaltered. To change it, Abe would need the benediction of two-thirds support in both the lower and upper houses of the Diet. Evidently, this is something Abe wants.

Back in 2014, Abe also overturned a self-imposed arms embargo that has been in place since the late 1960s, which was widely seen as a cornerstone of Japan's commitment to non-aggression. While he asserted that Japanese weapons will not be exported to states subject to UN arms embargoes — namely North Korea and Iran — or states embroiled in conflict, he said it will sell them to countries that "serve Japan's security interests."

Japan instantly got to business selling missile interceptor parts to the US in 2016, and announced joint research with the UK into air-to-air missile guiding capabilities. Abe also inked a defense pact with the Philippines who shared concerns about China. The pact allowed the Japanese military complex to sell hardware and provide defense training.

Another portentous move under Abe includes his continued insistence — and it must be said, relative success —  in boosting the defense budget.

In 2017, the budget sits at 5.13 trillion Yen, which is approximately US$43.6 — this is a marked increase from US$5.5 trillion in 2016, and US$4.98 trillion in 2015. The Japanese Ministry of Defense's shopping list for this budget includes amphibious assault vehicles made by BAE Systems, anti-submarine warfare helicopters, Boeing V-22 Osprey aircraft, Global Hawk drones, and tanker aircraft, among other things.

Taking a cursory look over the defense budget, you'll notice there's much attention paid to amphibious hardware. In fact, Japan is in the process of setting up an Amphibious Rapid Deployment Brigade to be ready at some point this year.

The budget also includes a section conspicuously titled "Respond to Attacks on Remote Islands." Additionally, the US Marine Corps holds a number of annual military training drills with the increasingly nominal Japanese Self-Defense Forces. This includes the annual "Iron First" drill, which is described as an "annual bilateral amphibious training exercise."

Commentators suggest that the emphasis on amphibious capabilities is born of a concern that one day Japan might have to brawl with China on the disputed Senkaku-Diaoyu islands.

Abe carried his pledge close to his chest into a parliamentary meeting on Tuesday, May 9, during which he repeated his vaunted pitch for constitutional revision, saying:

"I believe its the responsibility of our generation to change such a situation."

While Abe making the proclamation that he intends to see Japan's pacifist position reversed hasn't surprised many, he has so far remained doggedly tight-lipped about how exactly he intends to change the law of the land.

The move toward remilitarizing the country's armed forces seriously threatened to upend the post-war regional balance of forces. Many fear that the country could become entangled in regional and overseas conflict as the Japanese ruling elite move to solidify their interests abroad. This is also a point on which Professor Mason expresses his concern:

"Militarization in itself has become so obvious to the surrounding powers that there is limited shock-factor in terms of a sudden shift in the regional balance of power. However, Japan certainly now finds itself in a de facto regional arms race — including China, North Korea, South Korea, Russia, US and Japan. And, although China's military spending has consistently increased over recent decades, Japan's military modernization means that it remains powerful enough to deter potential Chinese 'incursions' — as seen from a US/Japan perspective — into its sovereign territory, as well as allowing Tokyo to play an active role in encircling China in the South China Sea and Western Pacific more broadly.

"The continued strengthening of Japan's military, relative to the oil-strapped, creaking machinery of North Korea, also means that — provided crudely propelled conventional or nuclear warheads can be either pre-emptively or defensively dealt with — Tokyo will likely increasingly be able to support US administrations in more effectively coercing the DPRK towards relinquishing its nuclear weapons programs and curtailing its ballistic missile development and testing," Professor Mason said.

Currently, the Japanese population remains split on the proposed revision of Article 9, with a recent opinion poll by the Japanese daily Mainichi Shimbun showing that 48 percent of voters support an amendment, which is an increase from 42 percent who supported the measure last year.