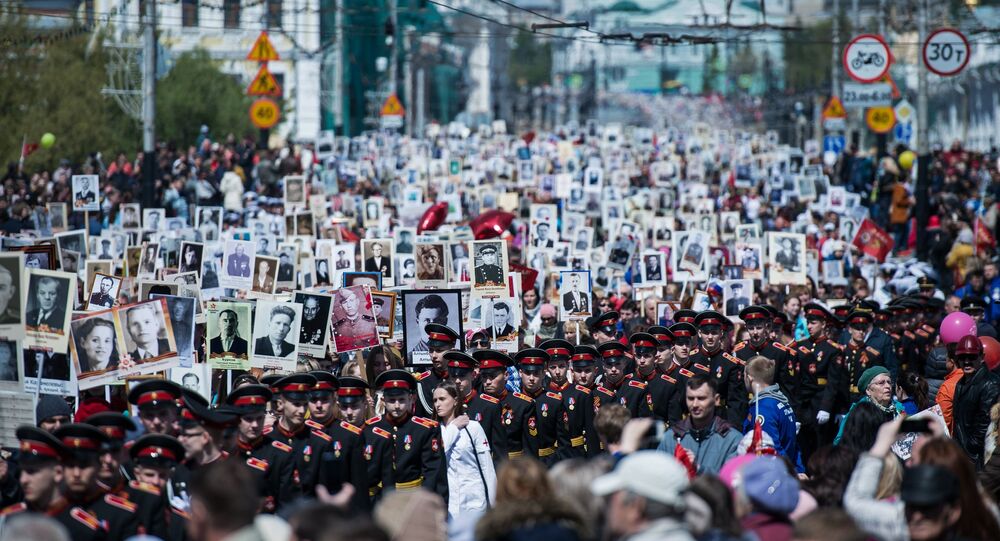 As millions of people across Russia are planning to carry the photographs of their loved ones who perished in WWII during the “Immortal Regiment” march annually held on May 9 since 2012, the first such event will be held this year also in Vietnam, Russian ambassador in Hanoi, Konstantin Vnukov told Sputnik.

“My Vietnamese friends and I agreed to hold such an event at Hanoi State University on May 4 to simultaneously mark the day of the liberation of South Vietnam on April 30 and our Victory Day on May 9. We have invited everyone, both Vietnamese and Russian expats to join in,” Vnukov told Sputnik.

Natalya Zolkina, the director of the Russian Center at Teachers’ Training University in Ho Chi Minh, said that the history of the Vietnamese “Immortal Regiment” will begin in Hanoi this year and a similar event will be held in Ho Chi Minh in 2018.

Major celebrations are scheduled to be held at the Friendship House in Ho Chi Minh on May 12 and at the Teachers’ Training University on May 6.

© Sputnik / Evgenia Filimianova
'Immortal Regiment' March Commemorating WWII Heroes Kicks Off in London
Students of the Russian language will take part in the final leg of the Best Public Speaker contest where they will expand on the significance of the Great Victory and its impact on their own country.

This will be followed by a concert given by local students and schoolchildren dedicated to the Great Victory.

“Last year there were “Immortal Regiment” events held in 45 countries and this year they are going to be held in 90, including here in Vietnam,” Konstantin Vnukov said.

The first “Immortal Regiment” march took place in 2012 in Tomsk, Russia, at the initiative of local TV journalists. About 6,000 marched along the city’s central street carrying some 2,000 photos of war veterans.

The "Immortal Regiment of Russia," a national public civil-patriotic movement, was registered on October 5, 2015. Representatives of 60 Russian regions initiated its formation at their congress in Vyazma in Smolensk Region on June 2, 2015.