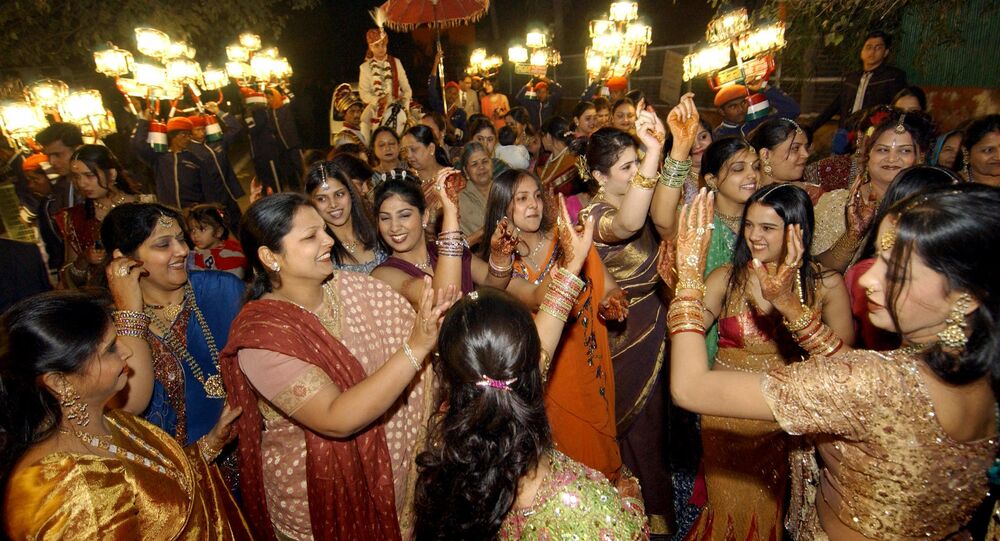 'Let the Paddles Do the Talking': Indian Brides Get Armed With Wooden Bats

An Indian state minister, Gopal Bhargava, has presented wooden paddles to 700 brides at a mass wedding, saying they can use them for self defense if their husbands get drunk or turn abusive.

© AFP 2020 / MANJUNATH KIRAN
India’s Space Agency Saves Over US$ 2 Billion per Year for the Country
Bhargava, a state minister in Madhya Pradesh, explained to reporters that he didn't mean to encourage newlywed women to beat their husbands, but rather wanted to draw the public's attention to the problem of domestic violence, which is especially widespread in rural areas.

The 40-cm bats, known as mogri and traditionally used in Indian laundries as tools to get dirt out of clothes, were given to brides at one of the mass weddings organized by the Indian government for low income couples who cannot afford an expensive private wedding ceremony. The paddles had slogans such as "For beating drunkards" and "Police won't intervene" inscribed on them.

Bhargava told the brides they should first try bring their husbands back to their senses, and only "let the wooden paddles do the talking" if the spouses don't hear reason.

"There is no intent to provoke women or instigate them to violence but the bat is to prevent violence," he told AFP, adding that the move was inspired by a woman who asked him whether she should beat her husband with a bat to stop him drinking.

© REUTERS / Kim Kyung-Hoon
China-India Ties Are Crucial Amid New Global Order - IMF Deputy Managing Director
Many Indian states have launched crackdowns on alcohol consumption in recent years, either banning or restricting its sale in an effort to prevent alcohol-fuelled violence.

Last year, the government of Tamil Nadu state pledged to introduce a ban as part of state election campaign, after the measure proved popular among female voters who blame alcohol for much of the state's domestic and sexual violence.