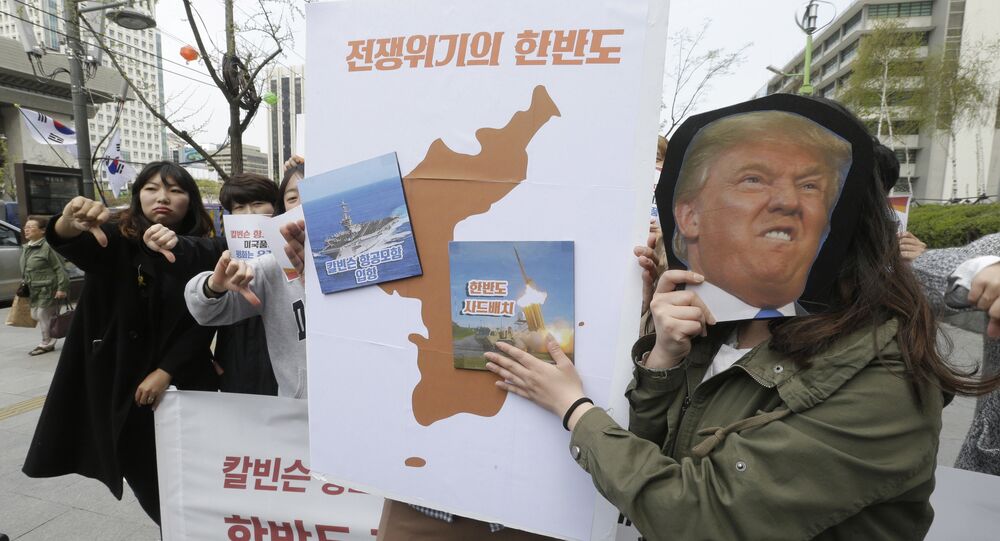 The US has reportedly demanded $1 billion from South Korea for the placement of the THAAD missile system on South Korea’s territory. Radio Sputnik spoke with an expert, Alexander Vorontsov, who noted that Trump applies a “rigid-push approach on his ally.”

© AP Photo / U.S. Force Korea
THAAD in South Korea: US Endeavoring to 'Up the Ante in That Part of the World'
President of the United States Donald Trump has expressed that South Korea should pay $1 billion for the deployment of the THAAD system.

In turn, the Ministry of Defense of South Korea announced that it is the US who should pay for the missile defense system, Yonhap reported.

South Korea feels that the US must bear the burden of installing and operating THAAD on its territory and not vice versa.

On Wednesday, the South Korean military reported that the first piece of equipment of the THAAD missile system was brought to the site of its deployment, a former golf club in Sanju in Gyeongsang Province.

The Ministry of Defense also stated that the complete installation of the system should be achieved by the end of this year.

Meanwhile, the commander of the Pacific Command of the United States, Admiral Harry Harris said that the US missile defense system in South Korea will be put into operation in the coming days.

The head of the Department of Korea and Mongolia at the Institute of Oriental Studies at the Russian Academy of Sciences, Alexander Vorontsov, told Sputnik in an interview that the disagreement over payment for the THAAD system is just the beginning of the conflict of interest.

“This is Trump's usual approach — to make allies pay more without understanding the details. As for the THAAD system, indeed, South Korea has allocated land for this facility and agreed on something, but there are still serious discussions going on in society regarding how effective it will actually be,” Voronstov said.

© REUTERS / USFK/Yonhap
South Korea Presidential Frontrunner Pledges to Review Divisive THAAD Deployment
He further said that in South Korea there are some who believe that the THAAD system is not capable of protecting Seoul.

Then, there are others who suggest that such a system is not so much for South Korea as it is for the US and its regional interests in the Pacific.

According to the analyst, Trump’s demands will further push people in South Korea to realize the need for developing their own nuclear program.

“Currently, in South Korea there are strong voices of those who suggest that the country needs its own nuclear program. Why should Korea be dependent on the US? Furthermore with pushing such conditions, when the demand of one of the parties is so rigidly imposed then such voices become louder,” Voronstov said.

He added that it seems like Trump considers such a rigid-push approach suitable for business, to work in this case also.

“However, it is known that when in business such an approach fails, a compromise must be found soon,” the analyst concluded.

The THAAD system has a range of some 200 kilometers (125 miles) and is designed to intercept short, medium and intermediate ballistic missiles at the terminal incoming stage. The move to deploy it in South Korea has been criticized by neighboring China and Russia as inappropriate, possibly disproportionate and affecting other countries' interests.