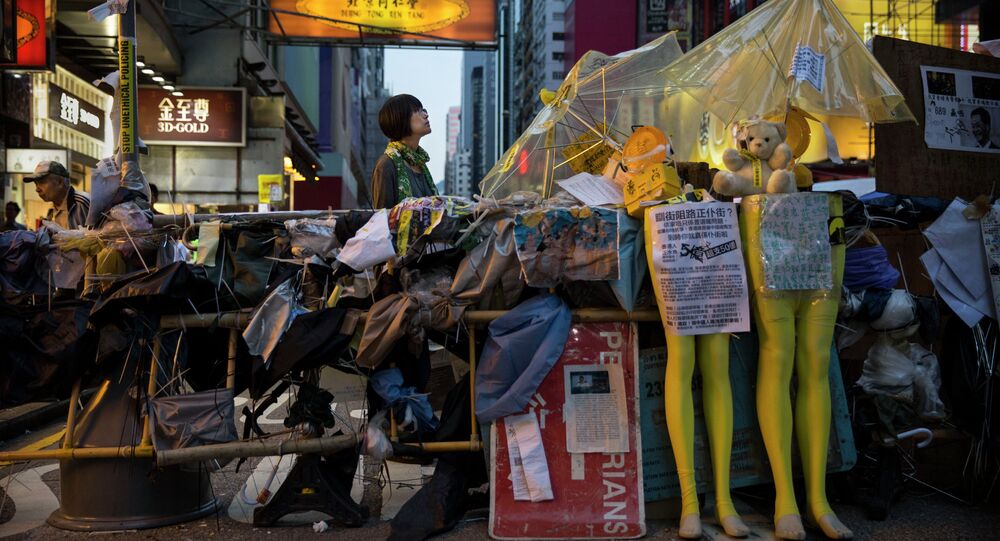 Chinese police detained nine Hong Kong activists from the Demosisto and the League of Social Democrats groups on the ground of their alleged participation in 2016 protests, according to media reports.

© AP Photo / Vincent Yu
Thousands in Hong Kong Launch 2017 by Protesting Ouster of Elected Lawmakers
MOSCOW (Sputnik) — Chinese police on Thursday detained a group of nine Hong Kong activists on the ground of their alleged participation in 2016 protests caused by the contradictions between Beijing and Hong Kong over the interpretation of the autonomous territory's Basic Law, local media reported.

According to the South China Morning Post, police detained nine people from the Demosisto and the League of Social Democrats groups in a series of raids that started at 7 a.m. local time (23:00 GMT Wednesday).

The activists were detained at their homes on suspicion of unlawful assembly as well as of breach of public order during the rally in November 2016, the news outlet added.

© REUTERS / Tyrone Siu
Hong Kong Activists Join Silent Parade to Protest Beijing's Interference
The newspaper added that the majority of the activists had been redetained, as law enforcement officials had already detained them on the issue and later released on bail.

In November 2016, thousands of Hong Kong residents participated in the rallies following Beijing's adoption of a controversial interpretation of Hong Kong's constitution. The move was made after two local activists, who had been elected to the legislative body of the autonomous territory, refused to declare their allegiance to China.