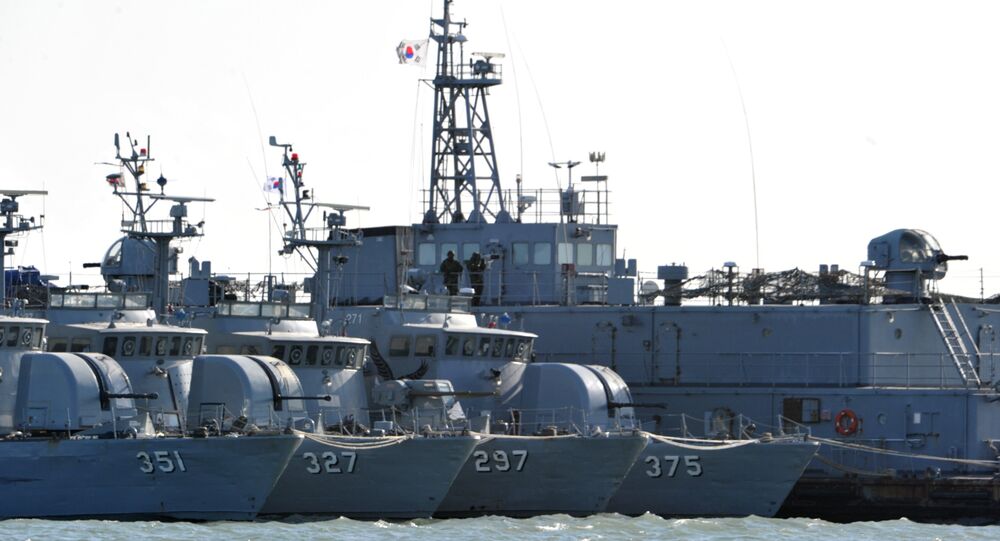 South Korea will conduct joint military exercises with the United States in the Yellow Sea later on Tuesday as Pyongyang has carried out a massive firing drills earlier in the day, local media reported, citing Seoul’s Navy.

MOSCOW (Sputnik) — Earlier on Tuesday, North Korea has conducted massive firing drills in the eastern port of Wonsan in celebration of the 85th founding anniversary of the country's military.

The joint drills will include a combined tactical operation and live-fire drill, it will involve South Korea’s Wanggeon destroyer and the USS Wayne E. Meyer, a guided missile destroyer of the US Navy, the Yonhap News Agency reported, citing South Korea’s Navy.

The countries are also planning to hold joint drills in late April with the USS Carl Vinson aircraft carrier, according to the agency.

On Monday, the US and South Korean military forces executed a joint air-to-air combat exercise at Kunsan Air Base in South Korea, according to he US Pacific Command.

© AP Photo / Jun Dumaguing
‘Undisguised Military Blackmail’: US Nuclear-Powered Sub to Join USS Carl Vinson Near Korean Peninsula
On Sunday, Japan and the United States started naval military exercises in the Pacific Ocean with participation of a US naval group led by the USS Carl Vinson, according to Japan Maritime Self-Defense Force. The group was sent by the United States to the Korean Peninsula amid growing tensions in the region. North Korean state Rodong Sinmun newspaper reportedly said that Pyongyang was ready to show its military power in response to the US move to send its naval group, while the country's revolutionary forces could sink the USS Carl Vinson with a single strike.

The situation on the Korean peninsula aggravated since North Korea carried out a number of missile launches and nuclear tests, with one of the latest constituting a launch of a ballistic missile from Sinpo, South Hamgyong province, in the direction of the Sea of Japan on April 5 and a missile test on April 16, claimed unsuccessful by the South Korean defense officials. The launches are considered to be in violation with the UN Security Council resolution