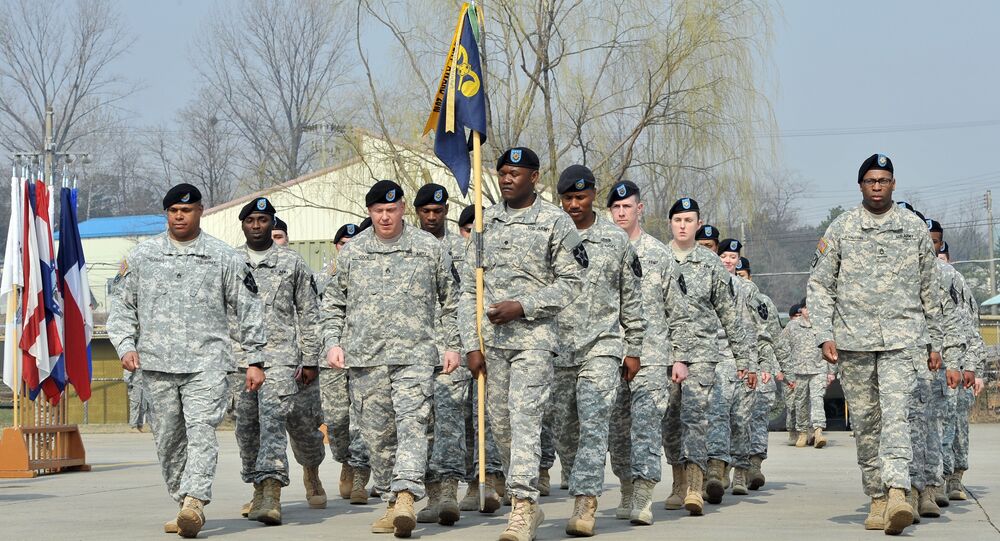 Washington is drawing South Korea into an alliance with the US and Japan, which is becoming a major irritant for both North Korea and China, a prominent South Korean scholar told Sputnik.

© Sputnik / Iliya Pitalev
US Plea to Ignore North Korea's Words Little Comfort to Allies
“While previously, the US-South-Korean alliance was used to contain a possible aggression by North Korea <…> and ensured South Korea’s defense, we have recently been facing the danger of negative consequences on this cooperation,” Lee Yeonjae, a professor at the Institute of North Korean Studies in Seoul and an adviser to the Justice Party, said in an interview with Sputnik Korea.

When asked whether promotion of a dialogue between the two Korean states aimed at denuclearizing the divided peninsula was part of the party’s program, professor Lee said that inter-Korean dialogue alone was not enough to resolve the problem of Pyongyang’s nuclear program.

“Our party believes that denuclearization is possible only through a dialogue between North Korea and the US. [South Korea] should either act as a go-between or actively support the process,” Lee Yeonjae noted.

He added that the denuclearization process should be preceded by an end of nuclear and missile tests by Pyongyang and a suspension of the US-South Korean military exercises.

Speaking about the South Korean presidential candidates who could be seen by Pyongyang as their most suitable negotiating partners, professor Lee named Moon Jae-in, who is close to former presidents Kim Dae-jung and Roh Moo-hyun under whose watch relations between Seoul and Pyongyang developed in a positive way.

He added that under President Donald Trump the prospects of a peaceful resolution of the problem “are at least better that when Barack Obama was president.”

“Everyone got tired of Obama’s failed policy of “strategic patience,” which resulted in the lack of any action regarding Pyongyang and the emergence of a nuclear missile-armed North Korea,” Lee emphasized.

He added that “the pressure brought to bear by President Trump, who says he will put all his cards on the table, could either mean [a preemptive US strike against North Korea] or a chance for a negotiated settlement,” professor Lee concluded.

On April 17, North Korea attempted to launch a ballistic missile that exploded within seconds after it took off, according to US and South Korean defense officials.

Meanwhile, a US naval strike group is on its way to the western Pacific Ocean in a bid to provide its presence near the Korean Peninsula amid concerns over Pyongyang's missile tests.

The US Navy's Carl Vinson Strike Group is set to be deployed to the Korean Peninsula amid growing fears related to Pyongyang's missile program, according to media reports.