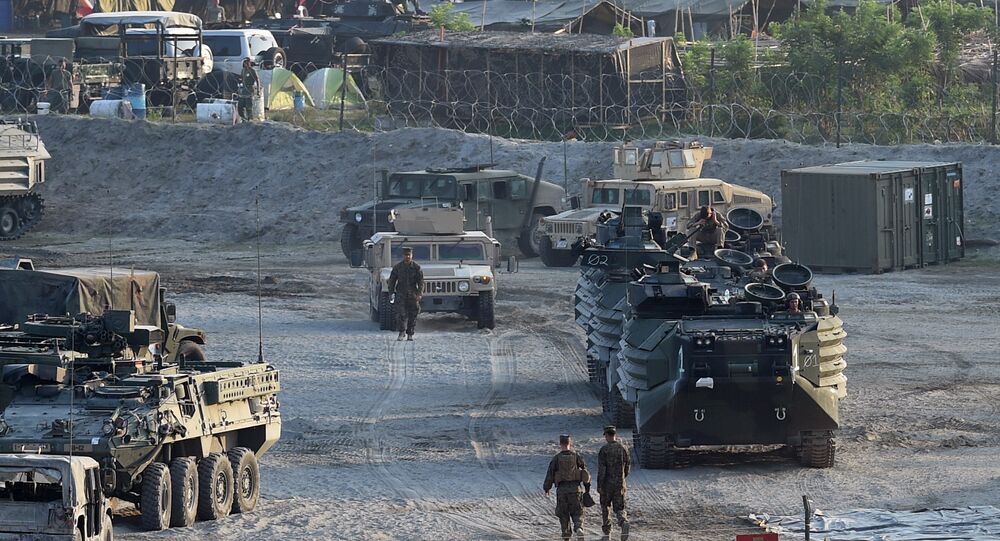 The Philippines and the US will hold military drills next month. The news comes just a day after outspoken President Rodrigo Duterte heaped praise on President Donald Trump. Radio Sputnik asked political scientist Dr. Jay Batongbacal to comment on this dramatic shift in the kind of rhetoric toward Washington that's now coming out of Manila.

On Sunday, military officials confirmed that joint Philippines-US exercises known as Balikatan would go ahead next month, despite earlier statements by President Duterte that he might cancel them, or even demand that US forces withdraw from the country altogether.

In a departure from drills from previous years, which focused on traditional military maneuvers against a foe presumed to be China, this year's exercises will focus on counter-terrorism, natural disaster and emergency response.

© REUTERS / Kim Kyung-Hoon
Tensions Over? Duterte Agrees to Hold Philippines-US Drills for the First Time During His Rule
The news on the drills comes just a day after a speech by President Duterte where he heaped praise on the US president. Speaking in Doha, Qatar on Sunday, Duterte called Trump a "profound" and "deep man," "a realist and a pragmatic thinker." The president recalled Trump's praise for Manila's war on drugs, and emphasized that the business magnate-turned-president would not have become a billionaire if he were "stupid."

The joint exercises, combined with Duterte's latest remarks regarding Trump, mark a dramatic shift from the kind of fiery rhetoric coming out of Manila and directed at Washington just three months ago. Since assuming office last June, Duterte had infamously called President Barack Obama a "son of a b****," and an "idiot," and told him to "go to hell," warning that he might "break up with America" and turn to Russia and China instead.

Speaking to Radio Sputnik about this flowering of Manila-Washington ties, Dr Jay Batongbacal, director of the Institute for Maritime and Affairs and Law of the Sea at the University of the Philippines, said that Manila's moves demonstrate that Duterte has realized the need to maintain relations with the US.

"I think this is really a realization on the part of President Duterte that he cannot so easily dismiss the United States and these bilateral relations, especially in the military alliance," Batongbacal noted.

© AFP 2021 / THOMAS PETER
This is What Philippines Chooses Between Peace With China, Territorial Claims in S China Sea
"Despite the rhetoric, Duterte still allowed the exercises to continue, although they were downscaled and refocused, as already reported. This is focused more on addressing internal issues, like terrorism, emergencies and natural disasters."

Furthermore, the expert noted that he expects only a further improvement in relations in the future. "We could see a warming up of relations in a while. President Duterte has, over the past couple of weeks, [been] signaling to Trump that he is prepared to have better and more cordial relations with this administration, unlike the Obama administration. We've also seen a lot less of the rhetoric and caustic remarks. They've become less and less in recent weeks."

"This could be an opportunity for Duterte to find some kind of modus vivendi with the United States which is a little bit more friendly than what initially appeared to be in the offing," Batongbacal added.

At the same time, asked how this thaw in ties might affect the situation in the South China Sea, including the territorial dispute between Manila and Beijing, Batongbacal noted that Duterte will likely remain mindful of China's concerns.

"Despite this slight change in the relationship, President Duterte is still quite sensitive to the impact of his moves and decisions in the South China Sea – very sensitive to Chinese reaction particularly. So as far as that is concerned, we are not expecting any major change. Even his recent pronouncement ordering the armed forces to go and occupy unoccupied areas in the South China Sea has already been walked back, and he is no longer pushing that particular agenda," the observer said.

Trillions of dollars-worth of maritime shipping pass through the disputed South China Sea territories every year, with China, the Philippines, Brunei, Malaysia, Vietnam and Taiwan each claiming parts of the waters, its islands, islets and reefs. Manila presently occupied nine of the about 50 islands that they claim.

Asked how an improved Philippines-US relationship would affect regional security in China's perspective, Batongbacal stressed that "China has made it clear…that any change in the current situation in the South China Sea, and any additional American involvement, would be viewed by China with great concern."

"For now, this kind of discussion has been overshadowed by events on the Korean Peninsula. But it's pretty clear that the trend is that China would probably not be so welcoming of new or increased American activities in the South China Sea," the analyst concluded.

How Vietnam Manages to Keep Narco Trade, Terrorism at Bay

This is What Philippines Chooses Between Peace With China, Territorial Claims