Japan's defense minister said US deterrence was necessary for peace and stability in the region.

TOKYO (Sputnik) — The threat of chemical weapons proliferation and use is posed not only by Syria, but also by North Korea, Japan's Defense Minster Tomomi Inada said Tuesday.

"The threat of proliferation and use of weapons of mass destruction [WMD], such as nuclear weapons and chemical weapons, is not only problem of Syria. It might happen in East Asia, in North Korea," Inada was quoted as saying by the Kyodo news agency.

The defense minster added that the US deterrence was necessary for peace and stability in the region. 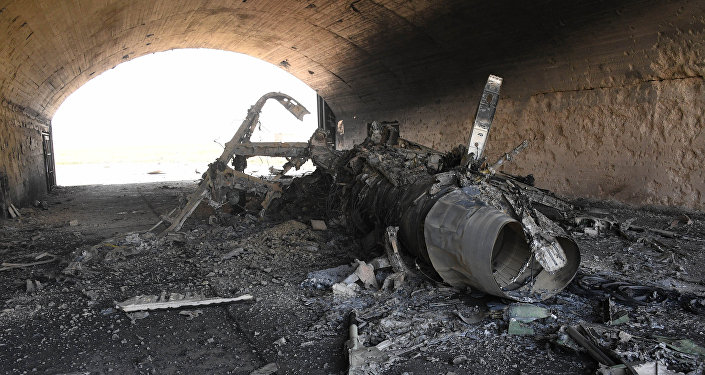 © Sputnik / Mikhail Voskresenskiy
'Cowboy-Like Show-Off': Czech Politicians Hit Out at US Missile Attack on Syria
The statement comes following the decision taken on Saturday to send US aircraft carrier Carl Vinson and its strike group to Korean peninsula from Singapore.

On Sunday, US President Donald Trump's national security adviser Herbert McMaster stressed that a preventive strike against North Korea would be legitimate, since the fact that Pyongyang possessed nuclear arms was unacceptable, adding that Trump asked military to be prepared for ‘full range of options’ to eliminate the threat from North Korea.

The military build up near Korean peninsula comes against the background of a US missile strike on a Syrian military airfield in Homs province carried out on Thursday as a response to a suspected chemical attack in Syrian province of Idlib on April 4 that killed over 80 people and was allegedly launched by the Syrian government.

© Sputnik / Mikhail Voskresenskiy
Dangerous Trend: US Attacks on Syrian Army Doing Nothing but 'Aiding Terrorism'
Damascus refuted allegations, while Russian Defense Ministry said on Wednesday that the Syrian air force hit a terrorist warehouse that stored chemical weapons slated for delivery to Iraq. On Thursday, Organization for the Prohibition of Chemical Weapons (OPCW) launched the investigation into the incident.

Russian President Vladimir Putin said that groundless accusations in the chemical weapons incident in Syria's Idlib were unacceptable before the investigation into the matter had been carried out, while Foreign Minister Sergei Lavrov on Saturday criticized the US missile attack as a violation of the international law.

May, Trump Stress Importance of All States Putting Pressure on North Korea