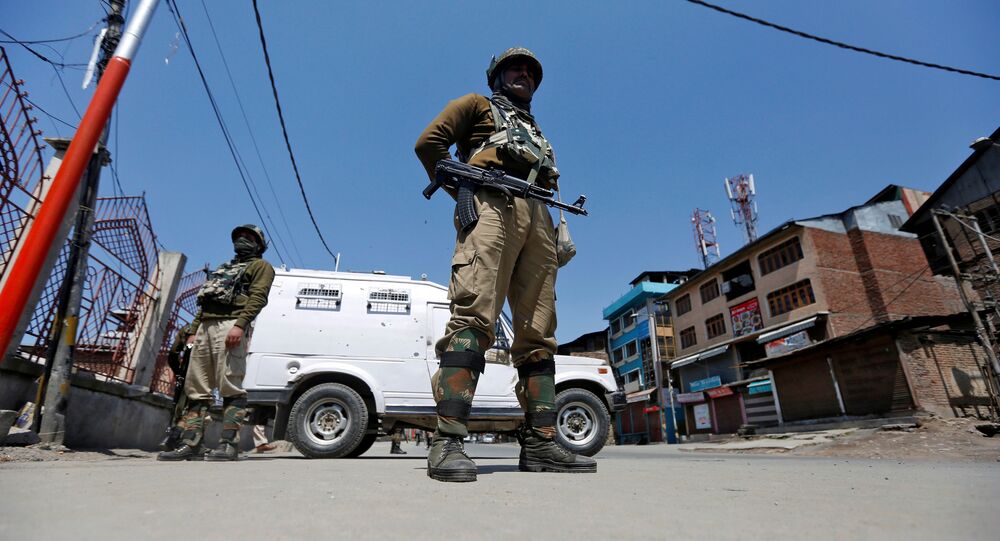 The Indian Government has clamped down on protests in the Indian state of Kashmir on Monday after eight people were killed by paramilitary forces during the by-elections to the Srinagar parliament seat on Sunday.

© AFP 2021
Pakistan Condemns Killings in Clashes Over Election in India's Kashmir - Foreign Ministry
New Delhi (Sputnik) – Apart from civilian casualties, approximately 200 security personnel were injured on Sunday. As a result of separatists’ boycott of the election, voter turnout was a low seven percent on Sunday and forced 70 polling stations to shut down. Police imposed curfew across the Valley to curb possible violence. Shops, schools, and offices were shut while public transport was restricted in several parts of the valley. The government suspended Internet and train services between Baramulla to Banihal.

​On April 12, polling is to be held in Anantnag, another parliament seat in Kashmir. Tassaduq Mufti, Peoples’ Democratic Party candidate from Anantnag, appealed to the Election Commission of India to postpone the election.

“The present situation in the valley is not right for the election. Eight civilians lost lives yesterday. You can't force people to vote and can't force them not to vote,” said Tassaduq, the brother of Jammu and Kashmir Chief Minister Mehbooba Mufti.

Omar Abdullah, the former chief minister of the state, accused the state government of failure. “Tassaduq's statement is an indictment of his sister Mehbooba Mufti’s government and its abject failure. How can the BJP not see this?” Omar said.

​Tensions between India and Pakistan have been on the rise since the creation of the state of Kashmir in 1947, with some Kashmiris calling for greater autonomy or even independence from India.

The situation has been grim in Kashmir ever since security personnel killed a local militant, Burhan Wani, in July 2016. Since then, more than 90 civilians have been killed and thousands injured by pellet gunfire from security personnel. Anantnag, Kulgam, Pulwama and Shopian have been at the center of the unrest.