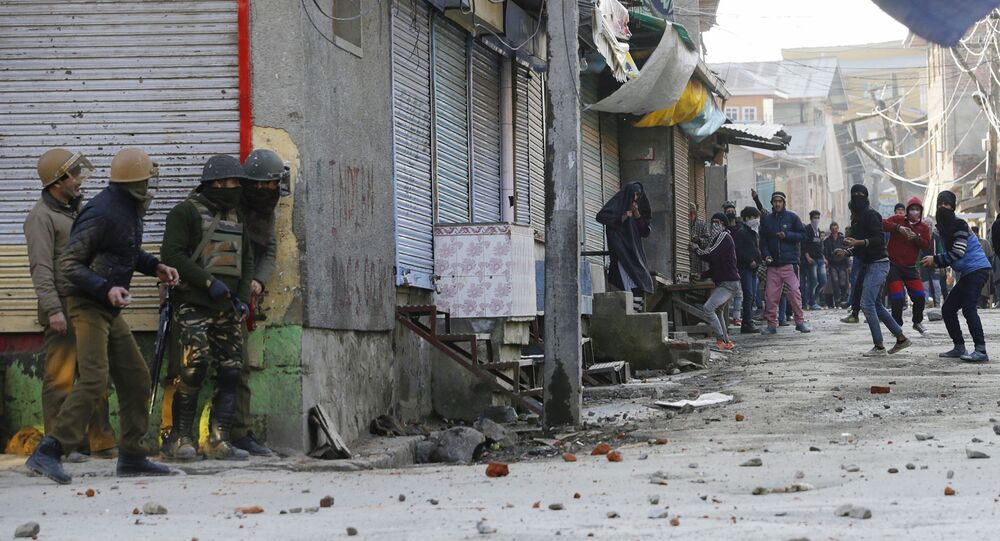 Pakistan's Adviser to the Prime Minister on Foreign Affairs Sartaj Aziz condemned the killing of eight people in the country's northern Jammu and Kashmir state that was protesting against the Indian parliament's lower house's by-election.

© AFP 2021 / NARINDER NANU
Indian Security Forces Kill Four Militants in Northern Kashmir
MOSCOW (Sputnik) – Pakistan's Adviser to the Prime Minister on Foreign Affairs Sartaj Aziz condemned the killing of eight people in India's Jammu and Kashmir state that was protesting against the Indian parliament's lower house's by-election, calling on the international community to urge India not to prevent a Kashmiri plebiscite, the spokesperson of the Ministry of Foreign Affairs of Pakistan said in a statement Monday.

The Indian media reported earlier on Monday that eight people were killed and over 170 injured as a result of violent clashes between Indian security forces and individuals protesting the by-election, after calls from local political leaders to boycott the election.

"The Adviser to the Prime Minister on Foreign Affairs, Mr. Sartaj Aziz strongly condemned the brutal killing of 8 youths, including a 12th grade student, by Indian occupation forces today when they opened fire on peaceful demonstrators protesting against the sham Indian parliamentary elections in Bagdam, Srinagar and Gandarbal districts," the statement read.

The statement added that the turnout of under 6 percent of voters, the lowest in 30 years, served as testimony of the rejection residents of the Jammu and Kashmir state have towards the elections which "cannot be an alternative to the right to self determination promised to them under numerous UNSC [United Nations Security Council] resolutions."

The document characterized the violence by Indian governmental forces in Jammu and Kashmir since 2016 as "crimes against humanity."

"We call upon the international community to urge India to put an immediate end to the ongoing bloodshed of innocent Kashmiris and behave as a responsible member of the international community by honoring its commitments to hold a transparent, free and fair plebiscite under the auspices of the UN in accordance with the UNSC resolutions to ascertain the wishes of the Kashmiri people," the statement concluded.

The Jammu and Kashmir state has been a territory disputed by India and Pakistan since 1947. The two countries have gone through three wars over the region, but the conflict has not been resolved. In 1993, 26 political, social and religious organizations in India formed the All Parties Hurriyat Conference (APHC), an alliance aimed at establishing the independence of the region.