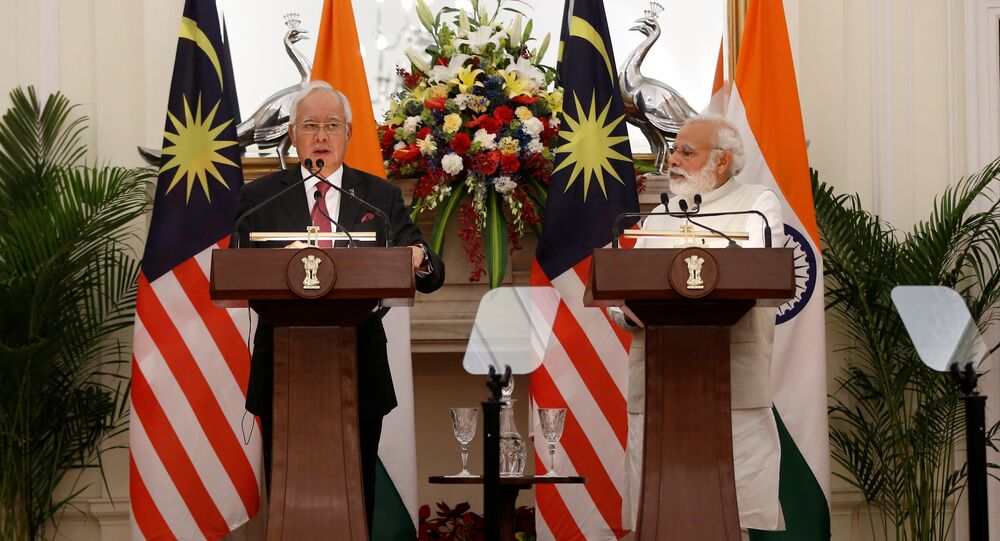 In a major boost to bilateral relations between India and Malaysia, companies from the two countries signed 31 agreements worth $36 billion in the presence of Malaysian Prime Minister Mohammad Najib Tun Abdul Razak in New Delhi on Monday.

© REUTERS / Olivia Harris
Malaysian PM Views Cooperation With India Vital in Fight Against Extremism
New Delhi (Sputnik) – Malaysia called on the Indian business community to impress upon the negotiators of Regional Comprehensive Economic Partnership (RCEP) to conclude the agreement by this year-end or early next year.

With US President Donald Trump withdrawing his country from Trans Pacific Partnership, Asian countries have laid their hope on the 16-nation RCEP, which has Cambodia, Indonesia, Brunei, Laos, Malaysia, Myanmar, the Philippines, Singapore, Thailand, Vietnam as its members, and six of its free trade partners Australia, China, India, Japan, New Zealand and South Korea. It is considered that agreement on this has been delayed due to India’s resistance to lowering tariff for China and the inclusion of services in the deal.

“Once RCEP negotiations are concluded and with India’s engagement with the Southeast Asian countries, there will be greater understanding of the business prospects in both countries in a spirit of give and take in both countries (India and Malaysia),” said Nirmala Sitharaman, India’s Minister for Commerce and Industry.

India has a trade deficit with Malaysia and other RCEP member countries. “Our ambitions do not stop at achieving high income status. Under a new plan that we are currently putting together – TN50 or National Transformation 2050 — our new goal is for Malaysia to be a top 20 country by 2050,” Razak added.

In 2016, India was ranked the ninth largest investor in Malaysia with total approved investments of nearly $300 million in eight manufacturing projects.