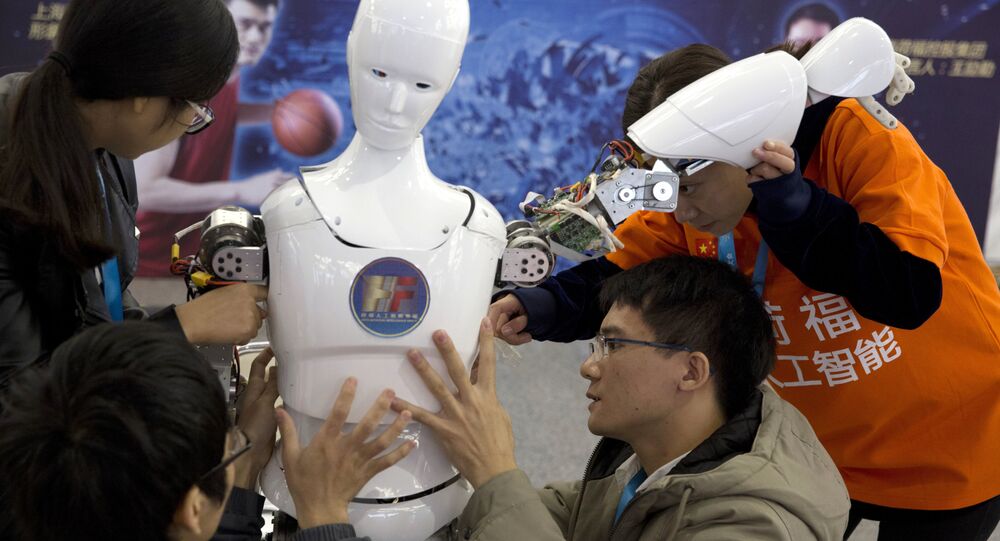 China's investment in technological startups in the US and Europe and China's technological achievements have become a hot topic after the recent publication of an article in The New York Times and a column by David Dodwell in the South China Morning Post.

Chinese companies are investing billions of dollars in Western startups, which are working on the latest technology.

According to Dodwell, director of the Hong Kong Trade Policy Group and a representative of the APEC Business Council, contrary to the naive notions in the West, China is moving toward global technological dominance.

© AFP 2020 / MARK RALSTON
China Eyes Breakthrough R&D Defense Plan to Take on US Technological Dominance
The US Air Force turned to the startup for help in creating military robots but did not want to finance the cooperation. Neurala eventually received money from a Chinese investment company that enjoys state support in China.

Similarly, China in recent years has been investing in US startups involved in rocket engines, sensors for marine drones, flexible electronics for aircraft, robots and artificial intelligence. This causes concern in Washington, as the possession of such technologies allows for the acceleration of military technological development in China.

It is becoming clear that over the years China has shown great interest in hardware related startups and not with developing software or mobile applications. It is ready to take risks where other investors retreat.

According to a representative of Neurala, in the United States it is relatively difficult to find money for such developments.

CB Insights reports that in 2015 China invested $9.9 billion in US technology startups in Silicon Valley alone and that is four times as much as last year.

According to The New York Times, Chinese investors supported by Beijing are trying to hire American representatives in the Silicon Valley to buy up technology in the heart of the US innovation.

The attempts of China to seize US technologies are not something new. Last year, China's activities in Europe also received a lot of publicity.

In May 2016, Aixtron, a chipmaker, accepted a purchase offer from Fujian Grand Chip Investment Fund; however, in October the German Ministry of Economy reported that the decision had been canceled.

As Handelsblatt newspaper later reported the cancellation occurred after US intelligence officials warned the Germans that Aixtron technologies could be used for military purposes.

© CC0 / Pixabay
Chinese Companies Aim to Take Lead in Artificial Intelligence Development
According to Ernst & Young the volume of transactions concluded by Chinese investors in Germany in the first half of 2016 amounted to 10.8 billion dollars and as of October 31, 2016, investors from China bought 58 German companies — 19 more than in 2015.

The biggest deal was the acquisition of a key manufacturer of industrial robots, Kuka, for 4.6 billion euros by the Chinese Midea Group.

“In Europe, there is no strategic thinking on foreign investment. If the deal makes sense from the economic point of view then it will be approved and resolved. That is quite wrong,” a member of the European Parliament, Marcus Ferber, said.

China’s Lagging Behind is a Myth

David Dodwell, in his column for the South China Morning Post newspaper, noted that the main difference between the US and China is that the first country is ruled by lawyers, whereas, the second by engineers.

Hence, China is not doing anything new that is not happening in other developed countries.

The Chinese initiative “Made in China 2025” has been rewritten from a German concept “Industry 4.0” by some 40 percent, however the speed and efficiency of Chinese implementation of the concept is quite amazing.

The widespread use of electronic payments through smartphones, supercomputers, drones, unprecedented growth of internal patents, the 3D-printing of blood vessels from stem cells, radio telescopes, an emphasis on R&D centers and education in the field of similar sciences is a long list of some of the achievements China has made since the early 2000s.