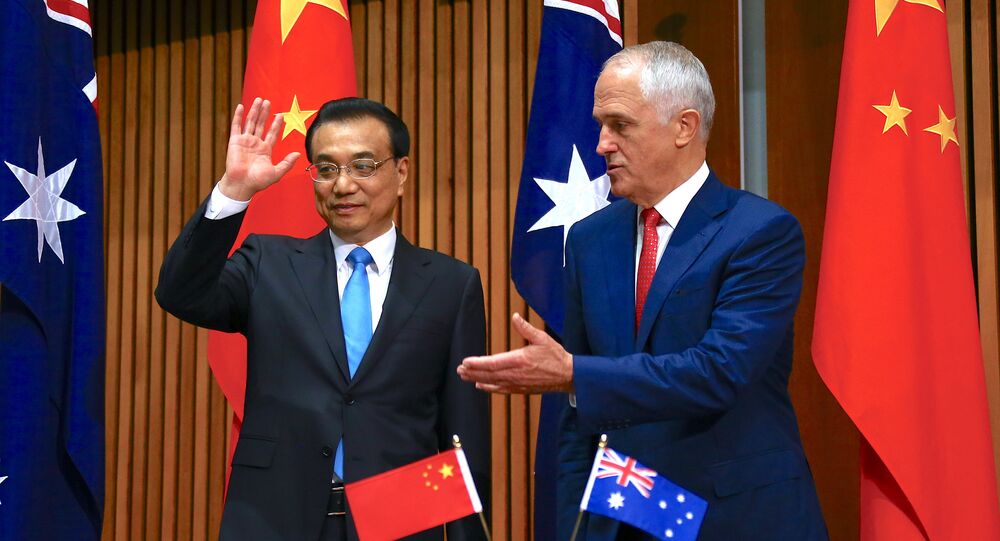 Chinese Premier Li Keqiang is visiting Australia and New Zealand this week, while US relations with Australia cool over the migrant deal negotiated by the former US administration. Will China fill the vacuum in the region? Radio Sputnik’s Brian Becker invited China expert Keith Bennett to discuss the issue.

© AP Photo / Elizabeth Dalziel, File
China Expected to Import $8 Trillion Worth of Goods in 2016-2020
US President Donald Trump's relations with Australian Prime Minister Malcolm Turnbull had a rough start. During their first phone talk, an apparently emotional exchange, Trump declined to fulfill the deal negotiated by the administration of former President Barack Obama in which the US pledged to take more than 1,000 immigrants from Australian detention centers.

"The Obama administration agreed to take thousands of illegal immigrants from Australia. Why? I will study this dumb deal," Trump tweeted after the phone call to Turnbull, which he reportedly ended abruptly

In general, it becomes more and more likely that the US is disconnecting itself from active foreign policy and concentrating on its internal affairs. This allows for other nations to seek new opportunities for trade that had been unavailable for them. One might think the time is ripe for China to approach the Pacific with propositions of trade.

However, China already is significantly involved in trade with New Zealand and Australia, according to China expert Keith Bennett.

"China has very good relations with the two countries, at least on the economic level," Bennet told Becker. "Politically, it's more complicated, but this is not an unprecedented visit."

According to various data from open sources, China's share in New Zealand trade seems to be already twice as big as that of the US. The same goes for Australia, whose exports to China are several times larger than those to the US.

This creates a complicated situation in which Australia is a close military ally of the US, but its economic interests naturally go along with China and other Pacific nations, says Bennett.

"There is a dichotomy between the economic factor and a political and military security factor," he says.

According to Bennett, the United States relies heavily on political and military force to prevent Australia's drift towards China, even using political means to organize a "soft coup" to get rid of Prime Minister Kevin Rudd. The Obama administration also increased its military presence in Australia for the very same purpose: to send a signal to Australia not to get too friendly with China, Benett explains.

Given all that, it would be hard to imagine a sharp move by Australia toward China, but there are signs it could happen under the Trump administration. The United States under Trump seems to be stepping back from its role of global director of trade and finances — at least for capitalist countries — a role the US has taken since 1945 Bretton Woods agreement. Bennet said this shift by the US could create a situation in the Pacific in which close trade ties of those nations with China could finally result in corresponding political closeness.

"What we are entering is a very unstable period of convulsion and realignment," Bennet noted. "So it's hard to make predictions, but I think… that economic changes will come first and political changes will have to catch up."

New Zealand Denies Allegations of Civilian Casualties in Afghanistan in 2010