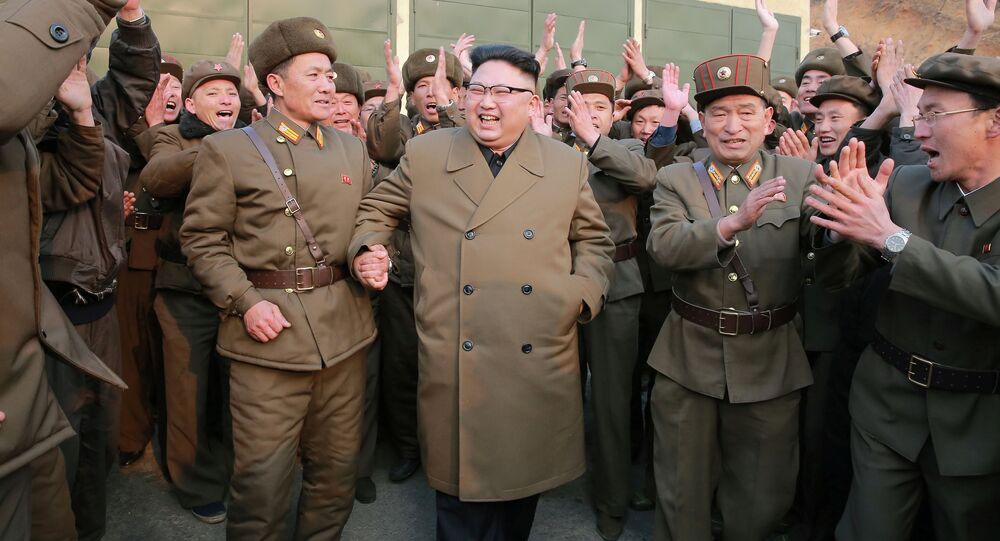 North Korea has seemingly ignored US Secretary of State Rex Tillerson's warning that military action against the country is "on the table" by proceeding with a ground jet test of a new high performance rocket engine.

© REUTERS / KCNA
North Korea Claims to Have Tested New High-Thrust Rocket Engine
The test of the new engine, which can be repurposed for use in missiles, was hailed as a success by the hermit nation's leader Kim Jong-un.

Kim Jong-un was present at the Sohae satellite facility in Dongchang-ri on Saturday, March 18, for the test, according to the Korean Central News Agency.

The young leader, quoted by KCNA, said that the test was a "great event of historic significance" that marked the "new birth" of the country's rocket industry as North Korea seeks to erase its dependence on other countries' technology.

"The whole world will soon witness what eventful significance the great victory won today carries," the leader purportedly said after the event.

The nation's new agency said the purpose of the test was to confirm the reliability of the engine's features, including its thrust power in the combustion chamber and the movements of various valves.

The examination comes after Tillerson said the United States' strategic patience with North Korea has ended, and warned that "all options are on the table" for Washington when dealing with Pyongyang, including military intervention.

Tillerson, who visited the border between the two Koreas on Friday, March 17, during his diplomatic trip of Asia, said that the "policy of strategic patience has ended."

"The diplomatic and other efforts of the past 20 years to bring North Korea to a point of de-nuclearization have failed. So we have 20 years of a failed approach," Donald Trump's top diplomat added.

"The US and South Korea have a bilateral mutual defense treaty that's been in effect since 1954. They have a number of common interests, regardless of the leadership or who the secretary of the state is," Dr. Daniel Pinkston, international relations lecturer at Troy University in Seoul, told Sputnik.

"Those underlined interests remain the same and again, it was more of chance to get to know people and understand any changes that possibly could be, which I think would be minor from the US position. It was a chance for Secretary Tillerson to get to know the people and his interlocutors and counterparts in the region," he added.

"The military is always on the table and part of the calculation for any state as it seeks to achieve its political objectives. So, it's always been on the table. The US fought a war here in the early 50s and the number of other allies it came to support, the Republic of Korea, of course the Chinese People's Volunteers supported the North…

"The war ended in an armistice, so the two sides found a military agreement, a ceasefire which is still in effect.

"From the US perspective, and I don't think this changes regardless of the change in personnel or presidents or what have you, the US has a long-standing mutual defense treaty with South Korea and the United Nations commander, who is the US general here, has an obligation to fulfil the armistice and ceasefire," Dr. Pinkston said.

Dr. Daniel Pinkston doesn't believe that North Korea has the ability to sustain a military order against other nations in the region.

"North Korea allocates a tremendous amount of their natural resources towards the military. That said, they have a lot of antiquated equipment, they don't have the resources to maintain a long term military campaign," he said.

"They've had to make decisions about how to allocate resources in a tri-system; they have so many people under arms. They can't train all of them adequately, so they selectively train groups like infantry forces, special operations forces and the give a lot of resources to asymmetric capabilities such as cyberwarfare, nuclear weapons, artillery, submarines and tunnels and other kind of tactics and other kind of techniques where they think they can apply those kind of asymmetric capabilities and gain an advantage."

Despite Dr. Pinkston's belief that North Korea is incapable of engaging in long-term warfare with South Korea and its allies, he said use of military force by the secretive state is "always on the table" should the North make an error.

"There could be an accident or North Korea could lash out, but without that happening, how is the US and its allies going to launch a preventive war?" he said.

According to the Japanese Defense Ministry, the missiles did not inflict any damages. The South Korean military claimed that the missiles had flown more than 600 miles. Pyongyang said that the launches were a successful drill to strike US military facilities located in Japan.