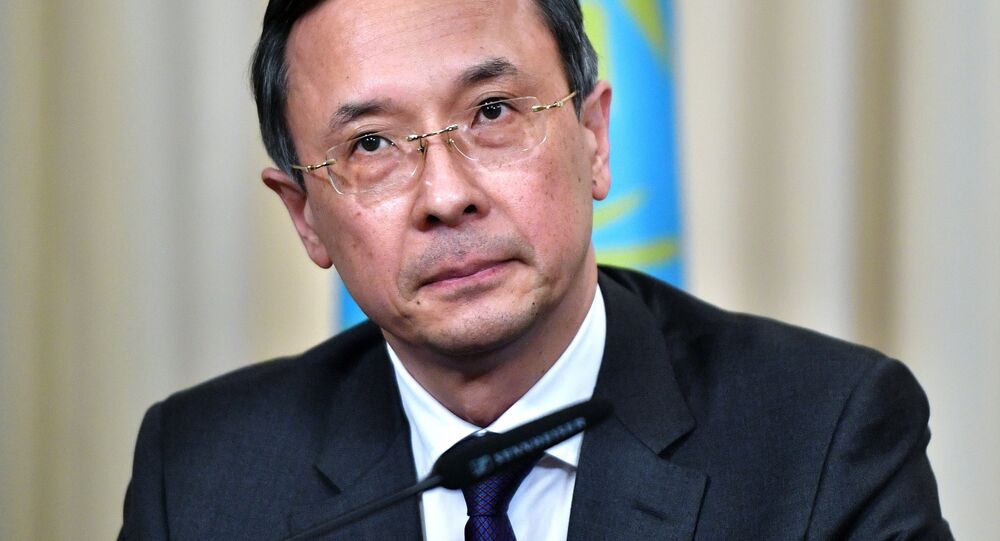 Kazakhstan's Foreign Minister Kairat Abdrakhmanov made a statement on Tuesday concerning a new round of the intra-Syrian Astana talks that started recently.

A new meeting on Syrian settlement in the Kazakh capital officially kicked off with a bilateral meeting between the UN and Russian delegations earlier in the day.

"Syrian 'South Front' armed group delegation is expected to arrive. Their arrival is expected later in the day," the spokesperon said.

Syria's Southern Front is a rebel alliance, formed in 2014 and comprising of over 50 opposition factions, including the Syrian Revolutionaries Front, 18 March Division, Lions of Sunna Brigade, Sham Liberation Army, and others.

Moreover, the fresh round of Astana peace talks on Syrian settlement will consider the creation of a working group on prisoner exchanges as well as conducting mining clearances at sites of humanitarian significance, he added.

© AFP 2020 / Kirill KUDRYAVTSEV
US Ambassador to Kazakhstan to Attend Astana Talks
A new meeting on Syrian settlement in the Kazakh capital officially kicked off with a bilateral meeting between the UN and Russian delegations earlier in the day.

"According to information provided by the guarantor countries, the featured issues include local ceasefire clauses and clauses to create a working group on war prisoner information exchanges, the issue of humanitarian sites, including UNESCO-listed ones, of mines, and strictly military issues," Abdrakhmanov said.

Furthermore, Tehran and Ankara are represented at a new meeting on Syrian settlement in the Kazakh capital on the level of deputy foreign ministers, Kazakh Foreign Minister Kairat Abdrakhmanov said Tuesday.

“All delegations on the level of the deputy foreign ministers of Turkey and Iran have already arrived, the Russian special presidential envoy for Syria as well as a special representative of the Russian Foreign Ministry are here," Abdrakhmanov said.

© Sputnik / Michael Alaeddin
Astana Talks May Work Out Paper on Int'l Cooperation on Demining Palmyra
Delegations from Damascus, Turkey and Iran have already arrived in Astana.

Besides, Kazakhstan is ready to provide the platform for the Syrian settlement talks in Astana if the guarantor countries of the Syrian ceasefire, Russia, Iran and Turkey, ask to prologue negotiations, Kazakh Foreign Minister Kairat Abdrakhmanov said Tuesday.

“Technically we are ready to provide platform,” Abdrakhmanov said in response to the question whether Kazakhstan can provide such an opportunity if the guarantor countries asked for prolongation of the Astana talks.

US Delegation Including Washington Official to Attend Astana Talks