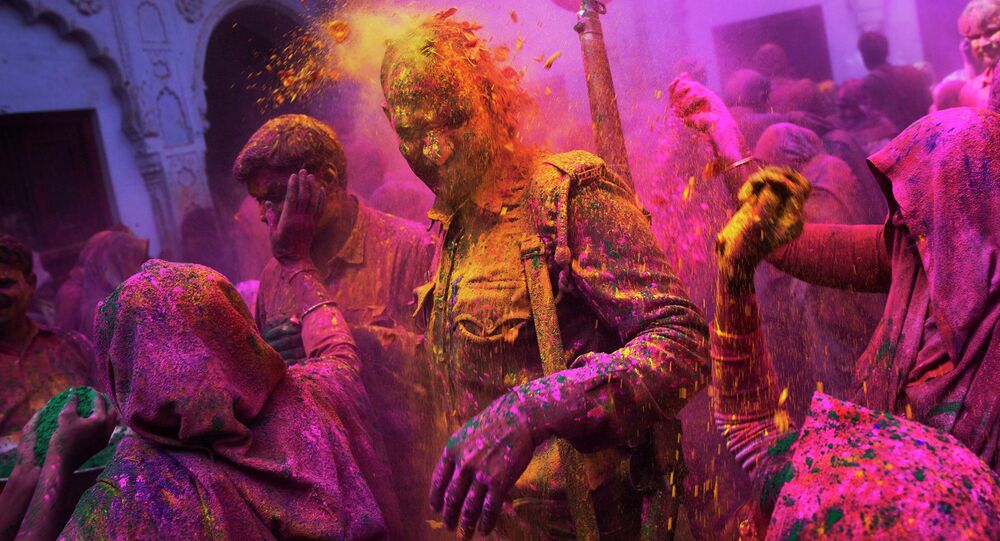 Holi, a festival associated with the arrival of spring, is traditionally celebrated as the triumph of good over evil, with people smearing each other with gulaal, other forms of color and water.

New Delhi (Sputnik) — Indians, both in the country, as well as abroad, celebrated Holi on Monday, also known as the “festival of colours.” Associated with the romance of the Indian mythological God Krishna and his girlfriends in the village of Gokul, near present day Mathura city in the state of Uttar Pradesh, Holi is also celebrated as the “festival of love.”

© Sputnik /
India Celebrates the Festival of Colors Holi with Joy, Revelry, Sweet Gujias
© Sputnik / Evgeny Biyatov
Moscow Dances Indian Style
10
The festival signifies the victory of good over evil, the arrival of spring, end of winter, and for many, it is a festive day to meet others, play and laugh, forget and forgive, and repair broken relationships, and is also celebrated as a thanksgiving for a good harvest.

The ancient Hindu religious festival is not only celebrated in India, but has also become popular with non-Hindus, expatriate communities in India and parts of South Asia, and other communities outside Asia.

Holi celebrations in most parts of India start on the night before Holi with a bonfire where people gather, do religious rituals in front of the bonfire, and pray that their internal evil should be destroyed as the bonfire starts.

In the evening, after sobering up, people dress up and visit friends and family.

Both the Indian President and Prime Minister shared their Holi greetings with the people of India. For PM Narendra Modi, this time Holi is even sweeter with his party winning a massive mid-term mandate in assembly polls in five states.

Indian cricketers, Bollywood stars, and people from all walks of life celebrated and shared their Holi greetings.

Happy Holi to everyone. Be happy and high on life. pic.twitter.com/qL0eR9Uqif

People celebrate the festival of colors #Holi at the Indian consulate in #Dubai pic.twitter.com/rTyq1YPwSc