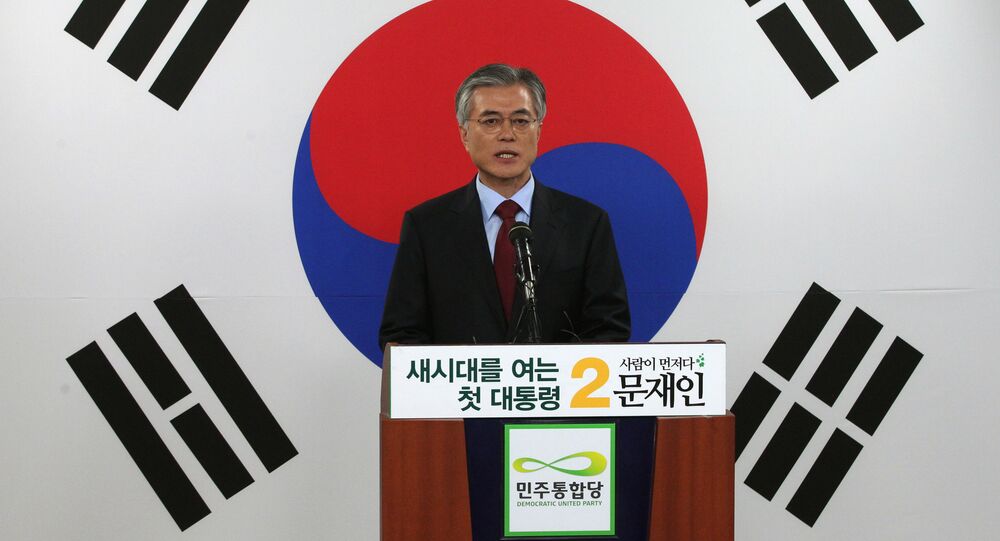 South Korea has been in political turmoil for months and Sunday, March 12, the disgraced President Park Geun-hye finally left the Blue House after being impeached over a corruption scandal. The man tipped to succeed her could signal a move away from the US' hawkish policy towards North Korea and China.

The hot favorite to win South Korea's snap election on May 9 is Moon Jae-in, who has been labeled by conservatives as a "communist sympathizer."

Moon, who represents the main opposition Democratic Party, is polling 29.9 percent, according to a survey carried out by the Korea Research Center for Yonhap News Agency and KBS broadcaster, well ahead of Ahn Hee-jung, a provincial governor, on 17 percent.

He was narrowly beaten by Park, a conservative, in 2012.

Moon, a liberal, has called for South Korea's strict national security laws to be repealed. They have historically been used by right-wing factions to muffle dissent.

He also wants to abolish the National Intelligence Service, the state's internal spy agency. The NIS was forced to admit in court in 2011 that it hacked into the Gmail accounts of several South Korean citizens.

But conservatives in South Korea and in the US fear Moon may be too soft on North Korea's increasingly belligerent and erratic leader Kim Jong-un.

If Moon was elected he could be expected to follow similar policies to his mentor, the late President Roh Moo-hyun, who died in bizarre circumstances in May 2009.

Roh, who was in the Blue House from 2003 until 2008, jumped to his death from a 150 foot cliff, called Owl's Rock, aged 62, while being pursued about bribery allegations against his family which emerged after he stepped down.

Snap elections to be held in 60 days to elect new pres in ROK. Below are the most recent poll numbers. Moon Jae-in is crushing it right now. pic.twitter.com/Rxb7L1hZRu

But he remains one of South Korea's most popular presidents. Under him the country became the 10th biggest economy in the world and democracy flourished.

In Roh's cryptic suicide note he wrote: "I am in debt to too many people. Too many people have suffered because of me. And I cannot imagine the suffering they will go through in the future."

Roh was president at a time when North Korea's leader, Kim Jong-il, was ailing and on the defensive. But his son, who took over in 2011 after his father's death, has recently become emboldened and aggressive, conducting repeated missile tests and making loud threats towards Japan, the US and the South.

Moon is a former special forces soldier who made his name as a pro-democracy activist and human rights lawyer. He worked closely with Roh in the 1980s when they opposed human rights abuses by the country's then military dictator Chun Doo-hwan. Moon has long campaigned for a profound change in the country's tense relations with communist North Korea, repeatedly calling for dialogue and co-operation.

He is also deeply skeptical about the new THAAD missiles which Washington is in the process of installing on the Korean peninsula. The installation of THAAD has been criticized by both Beijing and Moscow and there are fears they could provoke another missile crisis like Cuba in 1962.

The US is also reportedly considering deploying Gray Eagle attack drones at its base in Gunsan, further heightening tensions on the peninsula.

President Donald Trump appears keen to step up pressure on North Korea and the new US ambassador to the UN, Nikki Haley, said recently there was no point in talking to Kim Jong-un's regime, which she described as "not rational."

"We must embrace the North Korean people as part of the Korean nation, and to do that, whether we like it or not, we must recognize Kim Jong-un as their ruler and as our dialogue partner."

The 33-year-old North Korean leader despised the hawkish President Park, who he famously described as a "crazy old b****" and will delight at her downfall.

Park was forced to resign after months of allegations about the involvement of her close friend Choi Soon-sil, in state affairs.

The outgoing president, whose father was assassinated while he was South Korea's ruler in the 1980s, was allegedly involved in extorting money from various corporations, including Samsung, with the assistance of Choi, who is currently under arrest.

South Korean voters are now looking for a clean pair of hands and someone with a reputation for being untainted by corruption.

Although Roh's suicide came amid bribery allegations he is still perceived by Koreans as being one of the cleanest politicians in their history.

But for international observers the most fascinating question is whether Moon, if elected president, could tame Kim Jong-un and persuade him to tone down his rhetoric and aggression.