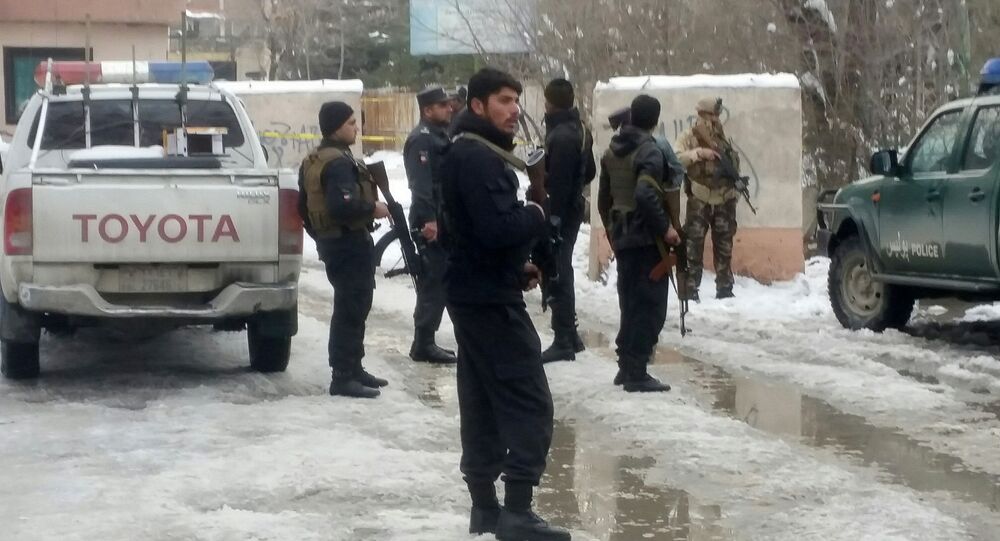 An expert says the Afghan state requires continued support from its allies to triumph against Daesh, Taliban and al-Qaeda.

New Delhi (Sputnik) — In a strongly-worded statement, India has described the terrorist attack on Sardar Mohammad Daud Khan Hospital in Kabul on Wednesday that killed 30 people as the most deplorable expression of the diabolical designs of terrorists.

"The heinous attack on a hospital is the most deplorable expression of the diabolical designs of terrorists and those who continue to provide safe havens and sanctuaries to terrorists," reads a statement by India's Ministry of External Affairs.

New Delhi expressed support to Afghanistan in fighting all forms of terrorism and bringing perpetrators of terrorist violence to justice.

With the latest terror attacks in Kabul and the first suspected Daesh attack in India, Afghanistan has become center-stage for New Delhi's foreign policy. In a recent meeting of India's foreign ministry officials with those of the US and China, Afghanistan was one of the hot topics of discussion.

"Increased moral, diplomatic, and material support has emboldened the externally-sponsored militant networks bent on destroying the "Islamic Republic" and re-establishing an "Islamic Emirate" in Afghanistan. This will only strengthen the regressive narrative of good and bad terrorists and inevitably rework to the advantage of entities sponsoring them. This also means that Afghan people will have to face more violence this year," said Vishal Chandra, Research Fellow at the Institute of Defense Studies and Analyses, New Delhi and the author of The Unfinished War in Afghanistan: 2001-2014.

The situation has been grim in Afghanistan with increasing clashes to control more territory by Daesh, Taliban and al-Qaeda in recent months. Last week, dozens were killed and wounded in coordinated attacks by Taliban, which wants US-led foreign troops expelled from Afghan soil, on a police station in Kabul. Earlier in February, Daesh had massacred six Red Cross workers and killed two dozen people in a suicide blast at the Afghan Supreme Court in Kabul.

Daesh Claims Responsibility for Attack on Military Hospital in Kabul

US Condemns Taliban's 'Callous' Attack in Kabul as 'Extraordinary Cowardice'