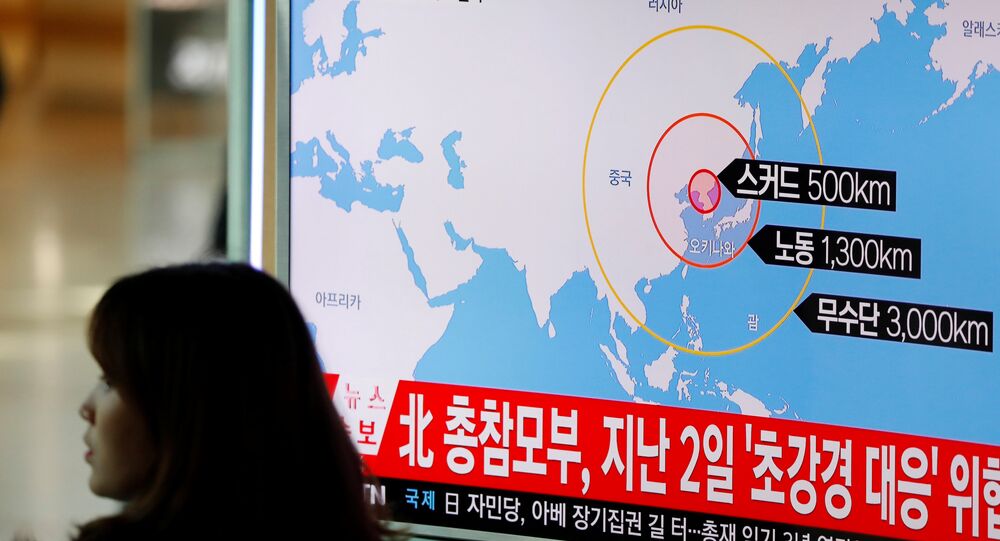 North Korea launched four ballistic missiles into the Sea of Japan quite possibly to deflect attention away from the high-profile assassination of Kim Jong-nam, the half-brother of the North Korean leader Kim Jong-un, Director of the Department of Unification Strategy Studies at the Sejong Institute Cheong Seong-Chang told Sputnik Korea.

"It is highly possible that North Korea's latest missile tests are not only meant to serve as a response to joint military drills conducted by the United States and South Korea, but are also aimed at diverting attention away from the investigation of Kim Jong-nam's murder," the analyst said.

© REUTERS / Lim Se-young/News1
Pyongyang Slams South Korean Foreign Minister Over Calls to Penalize North
Kim Jong-nam, once rumored to succeed Kim Jong-il as North Korea's leader, was assassinated at Kuala Lumpur International Airport on February 13. Pyongyang has been accused of being responsible for the killing, with North Korean officials denying the allegations.

Cheong Seong-Chang suggested that the latest launch was meant to "scare" Washington's allies in the region, Japan and South Korea, instead of the United States per se. The analyst added that Pyongyang's true motives could only be assessed after it issues a formal statement on the latest launch. North Korea has not commented on the missile launch yet, but last week the country promised to respond to the South Korean-US military drills which kicked off on Wednesday.

© Flickr / Dennis Skley
US Waging Secret Cyber, Electronic War on North Korea’s Missile Program
Earlier on Monday, North Korea launched four ballistic missiles deployed to the Tongchang-ri region into the Sea of Japan. The missiles are said to have covered a distance of approximately 1,000 kilometers (620 miles), with several landing as close as 300 kilometers (190 miles) from Japan's coast.

Kim Dongyeop, a professor at the Institute for Far Eastern Studies at Kyungnam University, suggested that the North fired Scud ER, also known as the Hwasong-7, or Rodong missiles. Both are derivatives of the R-17 Elbrus, a tactical ballistic missile initially developed by the Soviet Union in the late 1950s.

"The launch which took place on September 5, 2016, was meant to demonstrate accuracy of [North Korean] missiles since the three Scud-ERs fired that day landed in the same spot. This test has been apparently designed to demonstrate that [Pyongyang] is capable of dispersing missiles launched along a similar trajectory," the expert explained. "They could have also wanted to show that they are capable of targeting several US bases in Japan with a single launch."