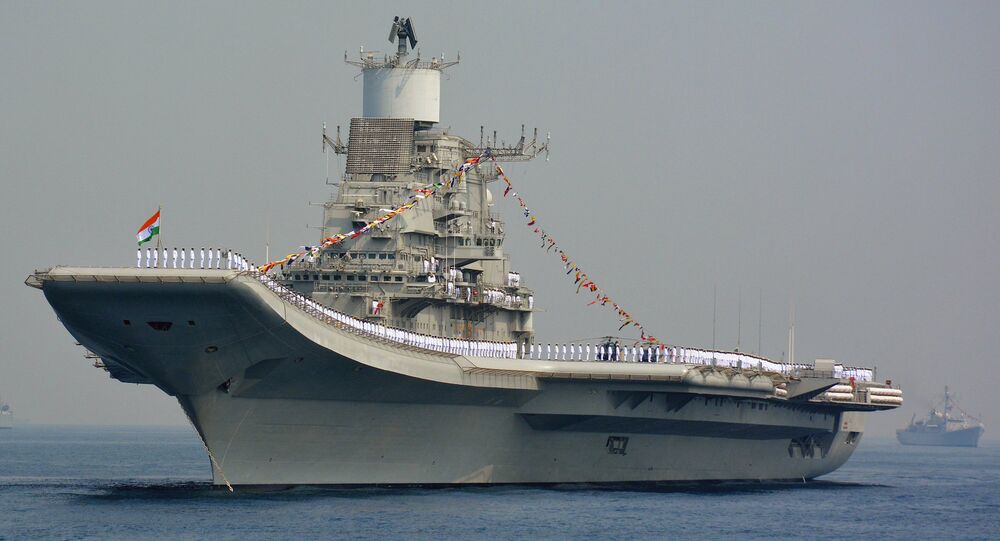 As part of the new war doctrine, the Navy has proposed dominating the Ocean by 2020 but with demand for allocations being successively ignored, how will it counter growing Chinese presence in its backyard and that too with limited capability?

© AFP 2020 / STR
Indian Navy to Hold Grand Farewell for Oldest Serving Warship INS Viraat
New Delhi (Sputnik) – The Indian Navy has proposed a new plan that seeks to ensure its dominance of the Indian Ocean region by 2020, as part of the new security architecture that was discussed by Indian Prime Minister Narendra Modi, National Security Advisor Ajit Doval and others recently.

The new security architecture under discussion was about re-positioning military assets and establishing a new war doctrine. But the naval proposal seems next to impossible, given the presence of Chinese submarines and ships in the region.

Currently, the Indian Navy lacks minimum operational strength in every domain though it aims to push for dominance in the next three years. The Indian Navy has 13 submarines and a lone aircraft carrier, INS Vikramaditya, while it needs at least 24 submarines to maintain a minimum force level. The next aircraft carrier is being built at Cochin Shipyard.

“It will be named Vikrant. As per the contract with the Cochin Shipyard, the ship will commence trials by end-2018 or early 2019,” said Indian Navy Vice Admiral Girish Luthra.

In 2017, the navy expects two of its long-awaited Scorpene-class submarines to be commissioned. Of the 13 subs, half of them are used either in a restricted manner or not at optimum level and have been kept as reserves for war.

The submarine strength will be hit further when INS Sindhurakshak is decommissioned in the next few months. Not only does the Indian Navy lack minimum force level but most submarines have also been in service for more than 25 years and have gone for one life extension.

During the high-level meeting which was held in the Indian Military Academy, Dehradun, the Navy asked the government to provide more funds for augmenting capabilities with newer anti-submarine warships, helicopters, surveillance planes and drones, besides submarines.

“New helicopters should have been inducted by 2008-09, but they have not arrived yet. The ships, such as INS Chennai, INS Kochi and INS Delhi are already commissioned, but without new helicopters. The demand is in excess of 100 (choppers) and we have a requirement of multi-role helicopters with facilities such as anti-submarine, anti-surface equipment, sonar facility. It is not about when we want it, we have crossed that line. Currently, we are using old Sea King helicopters for some work,” said Vice Admiral Luthra, the Western Naval Command chief. The Navy is also scouring for a utility helicopter to replace the ageing Chetak.

"India needs three carriers, because, at any given time, one carrier is being refit or undergoing repair; at least two carriers should be available to resolve issues during unforeseen emergencies," Navy Captain Gurpreet Khurana told Sputnik.

The Indian Ocean Region is becoming increasingly important for China’s economic and security interests, forcing Beijing to step up its presence in Delhi’s backyard. Analysts said it will keep growing manifold. The naval dominance proposal comes even as China and Pakistan continue to make rapid strides in their naval ties.