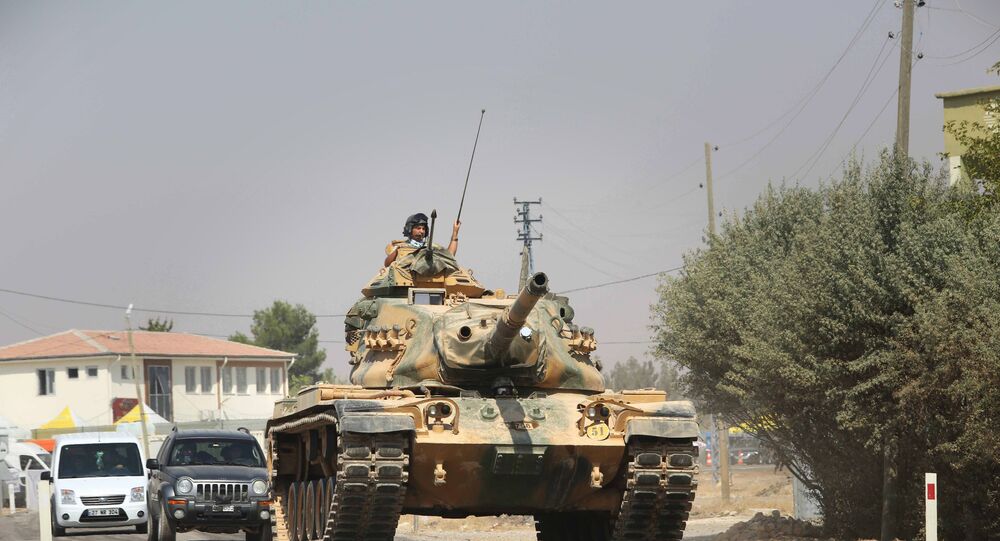 A train carrying military vehicles of the Turkish Armed Forces on Monday arrived to the southeastern Turkish province of Gaziantep near the border with Syria, Anadolu news agency reported citing an anonymous military source.

Turkey began the Operation Euphrates Shield on August 24, 2016. Together with the Syrian opposition Turkey took over the cities of Jarabulus and al-Bab in northern Syria.

On Friday, the Free Syrian Army (FSA) fighters backed by the Turkish forces celebrated the liberation of the Syrian town of al-Bab from Daesh terrorist group that had seized the city in 2013. Al-Bab is one of Daesh’s last remaining strongholds near the Turkish border. Capturing the city is of strategic importance to Turkey in order to prevent the Syrian Kurds taking it and unifying their own territories.

After the victory in al-Bab, Turkish Foreign Minister Mevlut Cavusoglu said that that Ankara intends to continue its advance into Syria to drive Islamists out of their Raqqa stronghold after securing a strategic town in Syria’s north.

Turkish President Recep Tayyip Erdogan said that the aim of the operation was to clear the territory of 5,000 square kilometers (1,930 square miles) of Daesh terrorists and create a safe zone for refugees there.