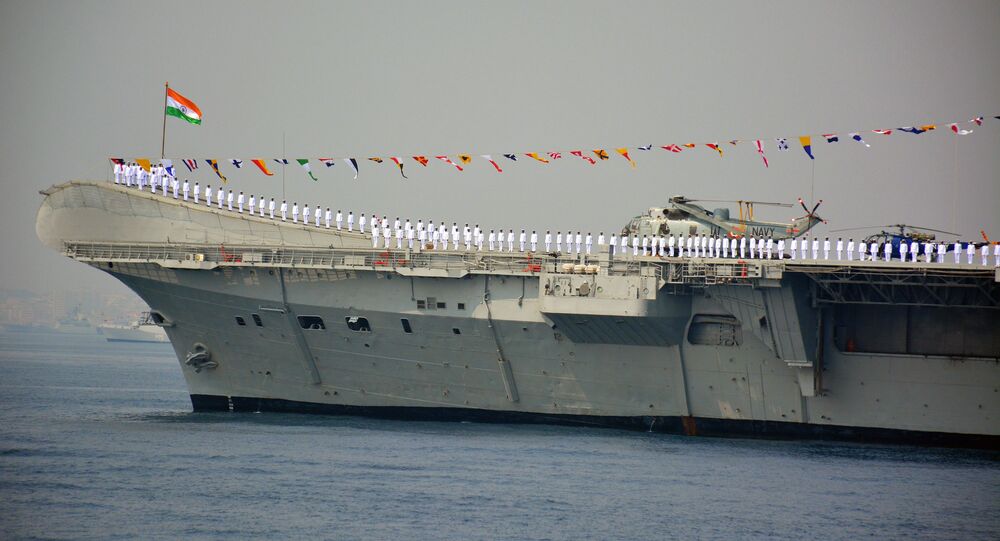 Under the Indian Flag, INS Viraat clocked more than 22,622 flying hours by various aircraft in the past three decades and spent nearly 2252 days at sea sailing 5,88,287 NM. This implies Viraat has spent seven years at sea covering the entire globe 27 times.

© Sputnik / Ildus Gilyazutdinov
Russia, India Finish Antisubmarine Stage of Joint Indra Navy Drills
New Delhi (Sputnik) — As the sun sets on 06 March 2017 the Naval Ensign and Commissioning Pendent will be lowered for a last time on board INS Viraat symbolic of the end of Viraat era in the history of Indian Navy.

INS Viraat has been the Flag Ship of the Indian Navy since its inception and holds the Guinness Books of record for being the longest serving warship of the world.

The Indian Navy has planned a grand decommissioning ceremony at the Naval Dockyard, Mumbai, which will also witness the release of a commemorative book tracing the glorious history of the warship.

© CC BY-SA 2.0 / Commander, U.S. 7th Fleet / Indian Navy Kamov Ka-28
India, Russia Sign $300Mln Deal on Upgrade of 10 Ka-28 Helicopters - Indian Navy
“‘Mother’, as she is referred to in the Western Commando of the India Navy, has been commanded by 22 Captains since 1987. She has been the Flag Ship of the Navy since her inception. Around 40 Flag officers including five Chiefs of Naval Staff were raised and groomed in her lap. Her legacy under the Royal flag was no less. As HMS Hermes, she was commanded by 13 Captains of the Royal Navy. Her role in operation Mercy in 1974 and Falklands in 1982 are now text book references for victory, for future navies,” read a release by the Indian Navy.

INS Viraat, the second Centaur-Class aircraft carrier has spent 30 years in the Indian Navy and 27 years in the Royal Navy. The decommissioning ceremony will be attended by personnel who have served on board INS Viraat in the past, and will include some of the officers from United Kingdom, according to the Indian Navy.

© Photo : Pipavav shipyard
Russia Chooses India for Most Expensive Private Warship-Building Project
The ship which has been the center piece of the Indian Navy, housed the fighters Sea Harriers of INAS 300 popularly called “White Tigers”, Anti Submarine aircraft Sea king Mk 42B, Sea King Mk 42 C known as “Harpoons” and the SAR helicopter Chetak as an integral flight. The ingenious Air Light Helicopters ‘Dhruv’ and the Russian twin rotor Kamov-31 have also operated onboard the ship.

It may be recalled that the government of southern Indian state Andhra Pradesh has expressed interest in converting the ship into a floating hotel-cum-museum to promote it as a tourist attraction. The plan is awaiting the final nod of the central government.