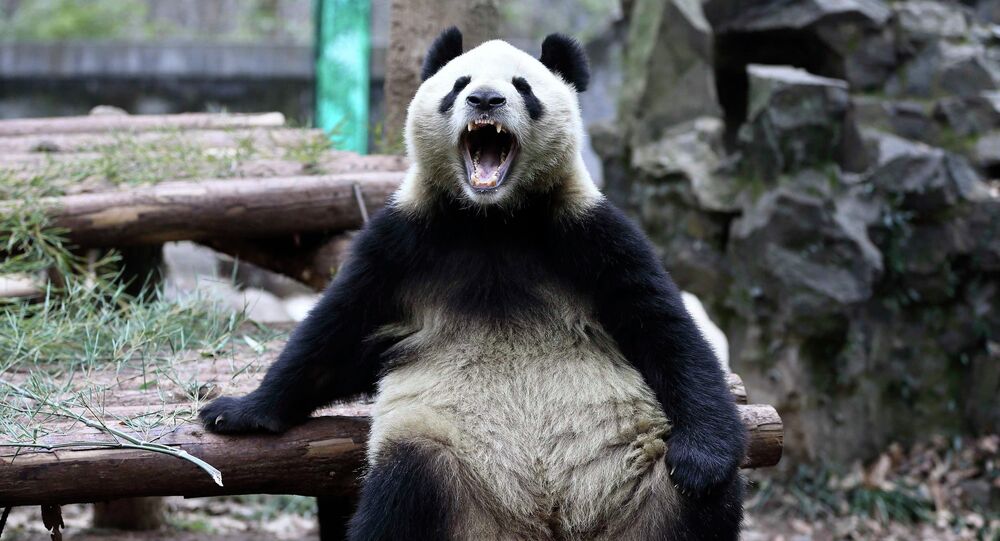 For years, pandas have been a symbol of love and peace, giving Internet users a cuteness overload. While most expect these fluffy black and white creatures to be harmless vegetarians, pandas are actually carnivores. A wild giant panda attacked and ate a goat on Wednesday in Leshan, a city in Southwest China's Sichuan Province.

Youtube/Associated Press
Panda Joins Wintery Fun
Locals spotted the wild panda climbing down from a mountain near Muping village, according to China News. The animal was wandering for 20 minutes before it attacked a goat belonging to a local farmer.

Receiving a report on the attack, employees of forestry bureau traveled to the village and collected samples of the panda's excrement.

Pictures of the wild panda and goat's bloody bones taken at the scene of the attack were uploaded on the Internet and shocked netizens. A hashtag "wild giant panda eating goat" was used 1.75 million times on Chinese microblogging platform Sina Weibo, with many users expressing surprise that pandas eat meat.

YouTube/iPanda
Clumsy Panda’s Embarrassing Acrobatics
Giant pandas are officially classified as carnivores. Although they mostly keep to a bamboo diet, their evolutionary ancestors were meat-eating, so the modern panda inherited the digestive system of a carnivore from them.

Despite the news, many refuse to believe that a panda could really eat a goat. Russian zoologist Igor Egorov who works at the Moscow Zoo shared his theory with Life.ru, saying that it wasn't this panda that killed the goat: "Pandas only eat bamboo. Maybe it got the blame for what some kind of predator had done. It just doesn't happen — an animal that only eats plants doesn't simply decide to start eating meat."

That same day, another wild giant panda was spotted in Leshan; it was spotted relaxing in bushes as reported by locals. The local forestry bureau later clarified that the two giant pandas have returned to nearby forests.

Panda Problems: Clumsy Cub Gets His Head Stuck in the Floor